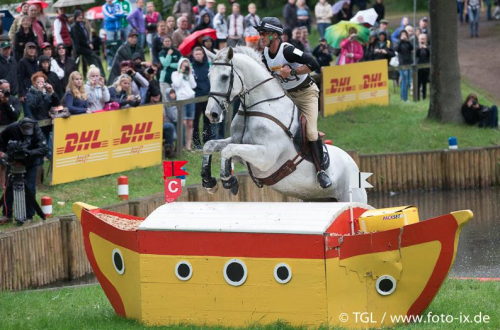 Good morning, EN! Another 4* has come and gone, this one on European soil; Luhmuhlen proved to be a difficult run for many of the riders that contested it. Only two US pairs finished the weekend, after cross-country claimed many victims, including two US riders.

Andrew Nicholson continued his 4 * domination by winning at Luhmuhlen this weekend with Mr Cruise Control. Nicholson was third after dressage, and a double clear on cross-country and stadium helped him move into first after others had problems. Zara Phillips and High Kingdom were nipping at their heels all weekend; they held on to finish second. [Andrew Nicholson wins Luhmuhlen]

Marilyn Little and RF Demeter were the best placed American pair; they finished with one rail down in stadium to place seventh. Jolie Wentworth and Good Knight were the other Americans to finish; they completed in 32nd place. Jennie Brannigan and Camabalda fell at the first water complex, and Jules Stiller retired at the seventh fence with Enjoy Me. [Luhmuhlen Results]

Animal Kingdom will be the first Kentucky Derby winner since Omaha in 1935 to travel across the pond to compete at Royal Ascot. The frequent flyer will end his career in the Queen Anne’s Stakes, set to run tomorrow. Graham Motion has trained for the race, which is run on grass, and uphill, by taking the Dubai World Cup winner on hacks, and running up hills with his partner, Perpetually. Animal Kingdom will go into the race the odds on favorite, despite never having run under similar conditions. As a huge Animal Kingdom, and Graham Motion fan, I’m pulling for them to emulate Frankel’s amazing performance last year. [New York Times]

Paynter won his comeback race, an allowance at Hollywood Park, yesterday. The Belmont runner up, and Haskell winner overcame severe laminitis and colitis, which threatened his life at one point, won his first race in a year by four and half lengths. [Racing Post]