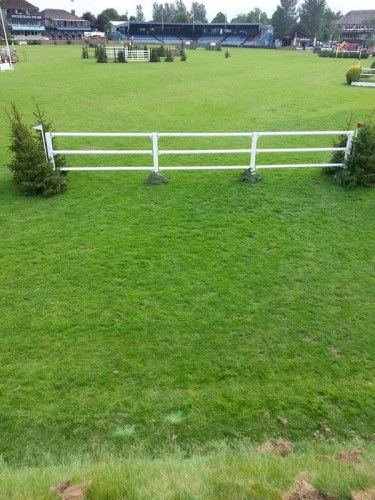 The view down the famous Hickstead bank. Photo via twitter, @donaldjdonald

Good morning EN! With no major events over the weekend, I hope you all spent some time away from your computers and in the company of your equine friends. While we’re nearing the end of June, I fear we are also nearing the end of bearable weather at weekend events. I just sent in our entry for our first Training Level event. I’m still waiting for the, ‘are you sure?’ email from the organizers. It’s hard to believe that less than a year ago we were competing in a BN event after a five year hiatus from jumping. How time flies!

Salperton Park in England hosted some of the top riders in the country over the weekend. Laura Collette and Rayef made their comeback after a disappointing withdrawal prior to Badminton, by winning an OI division. Mary King suffered a brutal fall with King’s Temptress, but luckily both of them seem to be doing well, with Mary being knocked unconscious, but reportedly with no broken bones. William Fox Pitt had a slew of horses, including Neuf des Cours, Seacookie, Parklane Hawk, and Lionheart. [Salperton Results]

Staying in England, for the first time in two centuries, a reigning monarch’s horse won the Gold Cup at Royal Ascot with her horse, Estimate. It’s worth clicking through just to see the Queen’s outfit, which she matched to the silks of winning jockey Ryan Moore. The Queen is a massive horse racing supporter, and has rarely missed the Ascot meet in her 61 years of ruling. [USA Today]

The U.S. narrowly missed out on a winning team performance at the CSIO in Rotterdam, after they were edged out by the Germans by one point. American rider Lucy Davis, who is just 20 and a student at Stamford University, won the Rider of the Day after she and her horse Barron went double clear. [Chronicle of the Horse]

Phillip Miller won the famed Hickstead Derby on Sunday aboard Caritier Z. Miller, from Hertfordshire, produced the only double clear round to clinch the title. William Funnell and Trevor Breen tired for second. [Horse and Hound]

If you’re in Chantilly, the north of France, anytime soon, check out the restoration of the Grand Stables, a palace/racetrack/colossal tribute to the equine specimen. Louis Henri-Bourbon, an 18th century prince, built the stables because he apparently believed in reincarnation, and specifically that he would come back as a horse. The racetrack and stables are absolutely magnificent, and are set to hold some of France’s biggest races, as well as being open to the public. [CNN]