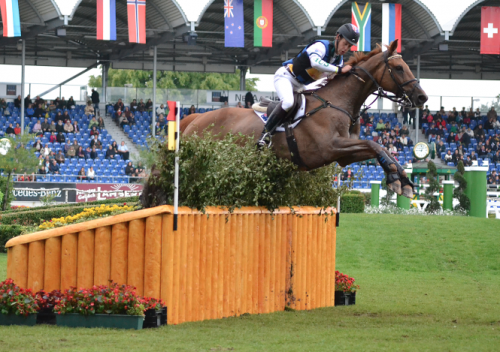 Good morning, EN! Later this week we celebrate our country’s independence day, and this weekend in Germany, some of our top riders were representing the great US of A at the Aachen CHIO. Cross-country was not kind to many riders on course, including Rolex winner Andrew Nicholson and Quimbo. The Germans dominated much of the action, once again sending a message to the rest of the world that they’re the nation to beat.

Christopher Burton and Holstein Park Leilani won the CICO 3* at Aachen this weekend after their strong showing in the jumping phases. ‘Burto’ and Leilani moved steadily up the ranks after their fifth placed dressage round with a double clear in stadium and cross-country. Seven Germans occupied the top 10, including Sandra Auffarth and her Olympic mount Opgun Louvo, who finished in second, and Michael Jung and La Biosthetique Sam FSW, who were third. [Christopher Burton Wins Aachen]

Tiana Coudray finished strongly at Aachen, piloting Ringwood Magister to a tenth placed finish. Tiana and Finn scored a solid 43 in dressage, but were in 20th place heading into the jumping. A clean show jumping round, and some time penalties in cross-country moved them up ten places, to finish with the US’s highest score. Clark Montgomery was the only other US pair to finish, after Will Faudree and Marilyn Little both fell on cross-country. [Aachen Wrap Up]

Sapphire gave birth, well ok, her surrogates did, to a colt and filly at Bluechip Farm in New York. The filly, who is by Heartbreaker, is a Sapphire lookalike with her chestnut coat and big white blaze, while the Presley Boy colt is a bay with a white star. The foals were born just thirteen minutes apart. [Chronicle of the Horse]

Scientists undertook a record-breaking genome project, on a horse. The 700,000 yar old horse, found frozen in ice in Canada, is the oldest specimen on which this has been attempted. There was enough DNA still attached to the skeleton for researchers to map the DNA, which will give us greater knowledge of how horses evolved to what they are today, and may provide examples for scientists in other fields to follow. [USA Today]

The latest in Smart Pak’s ‘Ask the Groom’ focuses on leg care. Mainly the daily maintenance and prevention of both injuries and skin diseases. It kind of made me feel like I should be doing more! [Smart Pak]