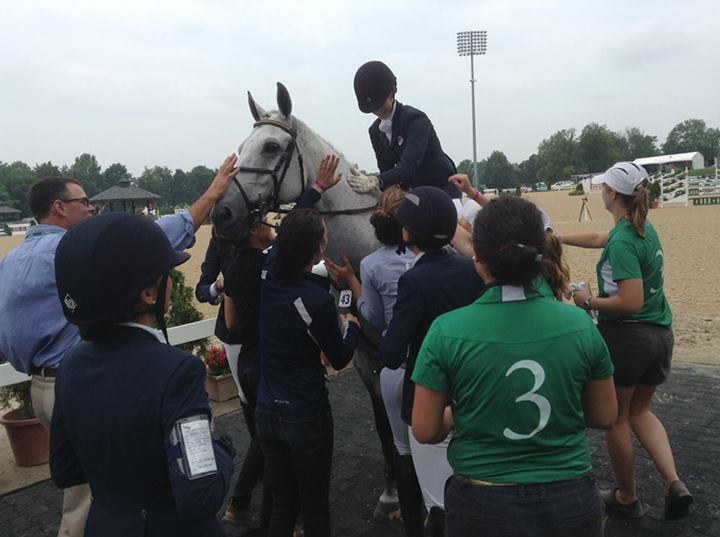 Nicole Doolittle is mobbed by Area III supporters after her win in the NAJYRC 1* Eventing competition. Photo via NAJYRC FB.

Good morning, EN! I hope you all enjoyed the coverage from NAJYRC this weekend. Watching these young riders go out and pilot their horses around huge courses, under such immense pressure really makes me aware of my own shortcomings, as I’m about to turn 25 and am therefor very far away from them in age. I love watching the videos, and hearing the screams of support by team members after a rider has gotten through a difficult competition. I have a friend coming over from the hunter-jumper world that competed at her first event, at BN, last weekend, and she couldn’t stop talking about the camaraderie and feel-good attitude that permeates at horse trials. Great job to all of those that competed at NAJYRC, you should be very proud!

Caroline Martin and Quantum Solace won individual gold in the 2* competition at the NAJYRC, and helped her team, Area III win team gold. Overnight leaders Rowdie Adams and No Money Down slipped to second with a two rail show jumping round. [NAJYRC Results]

It was a busy weekend at Aston Le-Walls in England, where there were four, count em’, four sections of Advanced horses and riders competing. Andrew Nicholson had another strong weekend, piloting Calico Joe and Qwanza to wins in their divisions, and Pippa Funnell won on Redesigned. Mary King was back in the saddle after her fall, riding Cavalier Venture to a fourth placed finish in Intermediate Section O. [Aston Le Walls Results]

Racing authorities in California are investigating whether or not to put limits on racing during extreme heat, after a two-year-old filly died at the State Fair. While California has seen some of the most extreme heat in years over the past few weeks, its racing board doesn’t have limits like many other venues do. [Sacramento Bee]