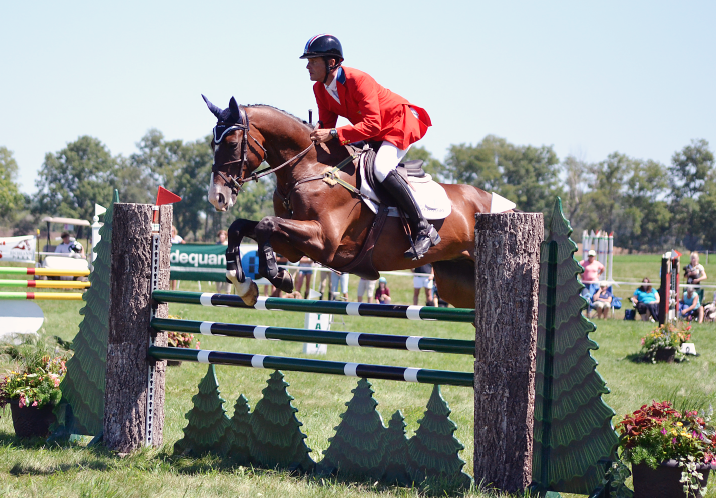 Good morning, EN! I hope you all had a great weekend keeping up with the results from Richland Park and across the pond with Blair Castle. Jenni provided truly stellar coverage, and Samantha Clark contributed her usual great photos and interviews.

Boyd Martin and Trading Aces won the CIC3* at Richland Park. The pair had a fabulous, steady weekend that saw Boyd move up to first after posting a clear show jumping round and a fast cross-country trip. Michael Pollard had a fabulous weekend as well, placing second with Mensa and sixth with Ballingowan Pizazz. Will Faudree and Andromaque were stellar in third, and Colleen Rutledge and new to the level Covert Rights placed fourth. [Richland Wrap-Up]

Many other stars were present at Richland, including Sinead Halpin, who won an Advanced division with Manoir de Carneville after taking some time to heal after her fall at Chattahoochee Hills. Laine Ashker and Millbrook winner Anthony Patch were second, and Jennie Brannigan and Cambalda won an Open Intermediate division. [Richland Results]

Across the pond, Lucinda Fredericks won the CIC3* at Blair Castle with Flying Finish. They won wire to wire, adding just a couple time penalties to their 38.8 dressage score. William Fox-Pitt and Running Order placed fourth in the same division. Marilyn Little took her two horses, new ride Tabasco TSF and RF Demeter. Demeter placed fifth in the CIC3*, and Tabasco was third in the CIC2*. [Blair Castle Results]

Charlotte Dujardin and Valegro keep on cleaning up at the European Dressage Championships, this time in the Grand Prix Freestyle. She and Valegro once again set a European Championship record in the Freestyle with a 91.25%. The British dressage team placed third overall. The British show jumping team won gold for the first time in 24 years. [BBC]