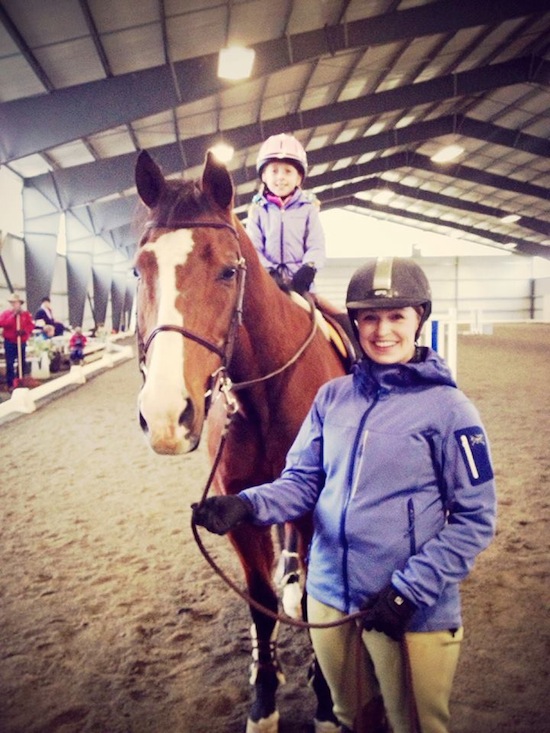 Smarty Pants with Stacy handling, Ashley in the irons.

Good Morning, EN!  Meet Smarty Pants (“Marty”), Stacy and Ashley.  With the Breaking-Bad-is-really-over blues setting in, I figured you could use a dose of cute to start off your week.  Marty is 30 years old and will always hold a very special place in my heart as he packed me around the Jumper ring in the 90’s. In addition to the AECs this weekend was Ashley’s first show! Marty and Ashley took home a blue in Lead Line at the Clear Round Hunter/Jumper Show, hosted by Spokane Sport Horse Farm. It makes me warm and fuzzy to know that Marty has touched so many lives and is well loved in his retirement.  It is very apparent that I need to go find an itty-bitty purple cross-country vest and ship it north!

This weekend was full of excitement at the AEC’s.  Thunderstorms rolled in late Saturday evening as the Advanced Stadium was about to get underway.  Due to the weather, organizers were forced to postpone Stadium until 7:45am Sunday morning.  Ultimately, Lainey Ashker and Anthony Patch were victorious in the Advanced division.  After seeing how sloppy the ring looked, I’m thinking it’s Lainey’s secret passion for the Tough Mudder runs that gave her the extra edge in Stadium!  Kristi Nunnink and R-Star finished second, Ellen Doughty finished third on Sir Oberon.

Amy Barrington Update: Over the weekend Rachel Barrington reported that Amy was quite feisty when she was awake and spent some time trying to convince Ben and Rachel to let her do things that she isn’t allowed to just yet, such as stand up!  Kick on, Amy!  You’ve got this!  [Amy Barrington Recovery on Facebook]

Equestrian Culture Magazine is looking to move from the digital space in to print.  Founded by Danielle Demers and published quarterly, Equestrian Culture showcases style, art and small businesses representing the equestrian lifestyle.  Rachel Hunt of Cricket&Blue serves as the magazine’s copy editor while Leah Anderson, friend of EN and owner of Dapplebay Inc is involved as the creative director.  They’ve launched a Kickstarter to help them get to print and could use your help. [EquestrianCulture Kickstarter]

Wild Horse auction goes off without a hitch.  Horse auctions are often a touchy topic, especially when it comes to mustangs.  This past weekend’s wild horse sale in Wishek, ND was instrumental to getting 103 wild horses from Theodore Roosevelt National Park in to new homes.  The top selling horse went for $2800.  After Elisa Wallace’s win at the Extreme Mustang Makeover maybe we’ll see more Eventers interested in Mustangs.  [Bismark Tribune]

Sometimes the long shot rises to the occasion.  Ron the Greek went off at 21-1 odds in the $1 million Jockey Club Gold Cup Invitational at Belmont Park this weekend.  Jose Lezcano piloted Ron the Greek thru a huge opening on the rail at the top of the stretch to leave Belmont Stakes winner Palace Malice in the dust.  Ron the Greek won decisively by 6 and 3/4 lengths. [Miami Herald]

Harold Megahey is chasing the dream. After winning gold at the FEI European Eventing Championships for Juniors, Harold has his sights on making the Irish Olympic team. Harold will spend the next year in Germany with Dirk Schrage, Germany’s gold team medal winner at the 2012 Olympics and the 2013 European Championships.  [Antrim Times]

From Horse Nation: 11 Memes That Show How You Really Feel About Dressage Some day, when my DQ friend Kali lets me do the music for her Freestyle, I’m totally going to make the music for the entrance super dramatic.  Then as she halts, Stephen Colbert’s voice will come over the music asking “What are the origins of Dressage?”  Then he’ll deliver the now famous line and it’ll turn in to a dance party.  Fierce!  [Horse Nation]