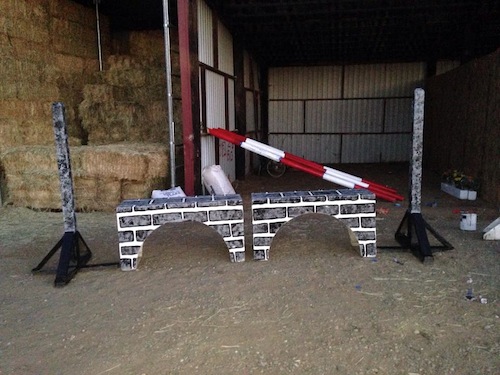 Yep, I'm certainly going to have a stop or two at this after all the work I put in to it. It is all but guaranteed.

Sometimes you have a weekend so great that you don’t really mind going back to work on Monday.  I was fortunate to have one of those this past weekend.  Sunday morning was spent galloping around like an idiot on my pony followed by an afternoon of painting jumps.  There’s something magical that happens when the paint comes out.  It’s hard to have a bad day when it’s spent getting your art on.  Hopefully this work week will let me recover enough so that I can be ready for Hawley Bennett’s clinic at Dragonfire this weekend!

As classes get underway this week at the University of Georgia, the UGA Eventing Team has their semester schedule ready.  They are excited about the clinics and events they have planned to prepare us for the next challenge! Chattahoochee Hills in Fairburn, Georgia is hosting another College Team Challenge on April 5th-6th. UGA is looking forward to competing against Clemson, Kentucky and Tennessee again and welcoming the newly formed teams from Auburn, Alabama and USC Aiken! You can expect tailgating, school spirit, and plenty of great riding all weekend! If you are an college rider, alumni, or eventing supporter make sure to put this date on your calendar! [UGA Eventing]

Oregon has joined the list of states that have banned horse-tripping.  The new law prohibiting horse-tripping went in to effect with the new year.  [More Here]

A horse was rescued after falling through a snow-covered tarp in to a swimming pool in Pennsylvania. The horse was tangled in the tarp and stuck in the icy waters for over an hour.  The attending vet cut the horse free of the tarp which allowed him to walk up the steps and out of the pool.  Other than being cold and some minor cuts to his fetlocks the horse was no worse for the wear. [More Here]

Three people have been arrested in Kentucky in connection with shooting and killing several horses.  All four horses that were reported shot either died immediately or had to be euthanized.  Two of the three individuals arrested have confessed to the crime. [More Here]

A severed horse head was found in the Miami-Dade area.  There is some suspicion that the horse was butchered alive for Santeria.  While it is legal for Santeria worshippers to kill animals for religious sacrifices it is not legal for them to do so in areas not zoned for slaughter.  Miami-Dade police are said to be investigating. Be warned, there are some fairly unsettling images at the link. [More Here]

New Jersey stable owners may soon find themselves out from under a tax-burden that many didn’t even know existed until recently.  In 2006, state-legislation mandated sales tax on storage facilities.  This category was stretched to include horse-stalls.  Many stable owners are stuck paying back taxes and penalties.  State Assemblyman Ron Dancer has introduced a bill in the state Legislature that may ease some of the burden on stable owners. [More Here]

Be careful the next time you fall off of your horse or you may end up with a new accent like Sharon Campbell-Rayment.  After falling from a horse she woke up speaking with a Scottish accent.  She has never visited Scotland but is one of 60 known cases of foreign-accent syndrome. [More Here]