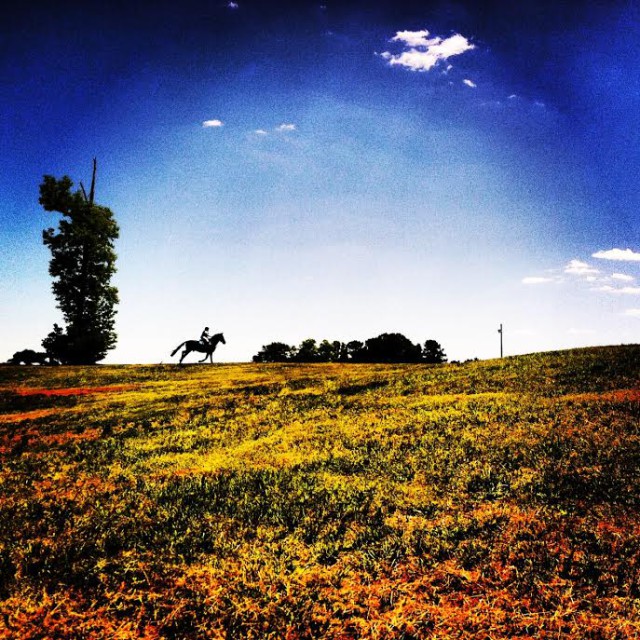 Poplar Place this weekend, from EN's own Instagram feed.

Happy Cinco de Mayo! Dos mas cervezas por favor! I’m not sure where last week went, but it’s around here somewhere. I don’t need to find the whole week, but the weekend was really important to me! If you find a spare Saturday send it my way. I’ll even take a Sunday at this point! On a completely unrelated note, please keep a good thought out for Kate Chadderton’s Collection Pass. He cut his fetlock pretty severely over the weekend and had to undergo surgery on Sunday.

The Kentucky Derby has come and gone, but there are still races to be run. While there is plenty of buzz around California Chrome, some eyes are shifting impatiently towards Cozmic One, Zenyatta’s first colt. [More from wave3.com]

California Chrome, the 2014 Kentucky Derby winner, is off to the Preakness. California Chrome’s story is truly a feel good tale and many people are saying he could go all the way. I want to believe in a California-bred racer (and a relatively inexpensive one to boot) but I’m very wary of the kind of heartbreak this could be. He’ll face some strong competition in the Preakness. [More from sacramentobee.com]

Brazil’s National Equestrian Centre is getting a facelift. It will serve as the site for equestrian events during the 2016 Olympics. The facility is currently used daily by the Brazilian Army Equestrian school, but will undergo a renovation along with several other sites. The city government of Rio de Janeiro has announced that they will be funding the renovation of nine different venues in the Deodora area. [More from horsetalk.co.nz]

Texas A&M has a new state of the art facility named after late alumni DVM Thomas Hildebrand. Earlier this week his wife and son led ribbon cutting honors on the facility. The $32 million dollar facility is composed of an arena, barn facilities, a cross country course and more. [More from houston.culturemap.com]

A Montreal police horse retrieved after he goes out on the lam. He escaped and spent about 30 minutes running wild in the streets. [More from theweathernetwork.com]

Are you about to be stuck on an airplane or in a car for an extended period of time? Do you need a list of horse-movies that you can share with your traveling companions? Movies make the time pass quickly, can do a bit to ease the I-Miss-My-Pony-Blues and certainly kept me from harming my coworkers on my flight home from Texas last week. Check out this list of horse related flicks from boston.com [More from boston.com]

It’s not Wellington or Spruce Meadows, but it’s growing rapidly. Equestrian sport is flourishing in the Gaza Strip. Currently about a third of the members of the Palestinan Equestrian Club’s 150 members are female. Coming from a culture where riders are overwhelmingly female, it may not initially seem like a big deal, but seriously, this is an amazing cultural shift in that part of the world. [More from al-monitor.com]

Monday Video: If you don’t read the article about equestrianism in the Gaza Strip, at least watch the video.