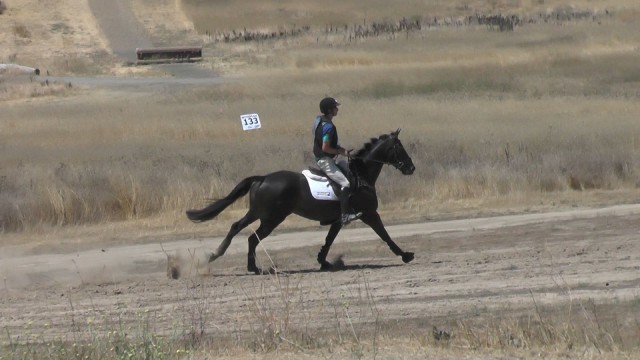 The Flying Pinney of Woodside! Photo via Bob Ravenscroft of Ride On Video.

We’ve all been or at least known someone who’s had a “flying pinney” incident.  I have to give credit to the Ride On Video crew for catching the exact moment when James Alliston’s piney escaped at Woodside. I remember seeing him gallop past with his back number missing and wondering to myself where it had gotten off to. Many people have complained about the transition to paper numbers and having our own pinney holders, but for me losing a slip of paper is preferable to having cloth whack you in the face off of a drop fence!

Lucinda Green is returning to California for two clinics in October. The Northern California clinic is at Camelot Equestrian Park in Chico on October 10th and 11th, the Southern California clinic is at Shepherd Ranch in Santa Ynez on October 12th and 13th. Both clinics are open to riders from Beginner Novice thru Preliminary. The two day clinic costs $420 and stabling fees are paid to the facility. Auditors are welcome at $10/day. For more information contact Sue Funkey at [email protected]

The outbreak of vesicular stomatitis continues to spread. 340 horses in Colorado and Texas have been affected since the spring. Eleven Texas counties have had cases and thirty facilities are under state quarantine. Insect control is one of the most important factors in preventing the spread of the disease. [More from ratemyhorsepro.com]

Back to school means the end of summer, the arrival of fall, Halloween, the holidays and eventually The Rose Parade. The equestrian units selected for the 2015 Rose Parade have been announced. The 2015 theme is “Inspiring Stories” and will feature 18 different equestrian groups. In addition to riding in the parade route the groups will participate in Equifest on December 29th at the Los Angeles Equestrian Center. [More from dailynews.com]

An Ohio family that uses a miniature horse as a therapy animal is fighting the courts decision to dismiss their case. Ingrid Andersen filed a federal lawsuit against the city of Blue Ash, Ohio after the city violated the Americans with Disabilities Act by classifying her daughter’s miniature horse as livestock. Under ADA rules miniature horses are a viable alternative to service dogs in situations where the use of equines would be appropriate. [More from thehorse.com]

One of the riders I’m most looking forward to seeing at the WEGs this year is China’s Hua Tian. Born in London to a British mother and Chinese father, Hua Tian competes as China’s only Olympic level equestrian. He’s come quite a long way from a kid who hacked out on golf course pathways to representing the most populous nation in the world. [More from BBC.com] (Side note: He is is one of my top picks for my Fantasy Eventing Team! [Fantasy Eventing] )

In addition to the World Equestrian Games another major event is taking place: The Youth Olympic Games in Nanjing. New Zealand’s Emily Fraser has captured the individual gold medal for show jumping. [More from 3news.co.nz]