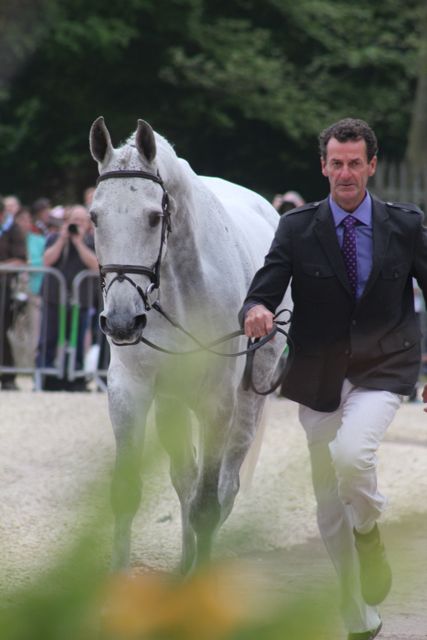 Monty White wrote an excellent blog on his site, Talkinghorse.net, chronicling the return to competition of Mark Todd’s NZB Land Vision. I follow Monty on Twitter (@Monty_White) and noticed a blast of tweets last weekend about Gatcombe in general and NZB Land Vision in particular.  He followed up those tweets with a wonderful article on the horse’s weekend.

Sir Mark Todd and NZB Land Vision won Badminton in 2011, but the horse suffered an unfortunate tendon injury to sideline him for the rest of the year.  It was hoped that this horse could take Mark Todd to the London Olympics, but the nagging injury kept him out of the running.  After another year off, the gray gelding returned to work in March and made his return at Gatcombe.  Watch out, world… Mark Todd and Land Vision are back!

I’d made the trip especially to watch this horse, and spent 40 minutes watching Mark warm up for the dressage. I’m not exaggerating when I say this horse made everything else in the warm up field seem double ordinary, and I was amazed that more people weren’t watching. Dan Jocelyn quipped and lamented that he would have to follow the Badminton Champion into the ring, after Mark was already ‘impressing the judges’ with single step changes in the warm up.

This truly is a horse in a class of his own, and I’m genuinely pleased I got the opportunity to watch him and the legendary Sir Mark Todd go round one of my favourite events. I spoke to Mark briefly after cross country and he mentioned he plans to run NZB Land Vision once or twice more this year and hopefully look at a 3 or 4 star next spring, as Mark put it “he’s definitely got another big win in him” (a spring 4 star may mean having to go to Rolex, as Badminton may not be possible due to lack of points). I’ll gloss over the fact that I did briefly attempt to compare NZB Land Vision to Mr Cruise Control, who I also think has a lot of presence, which didn’t go down too well, and to be honest Land Vision is a few notches above all others.