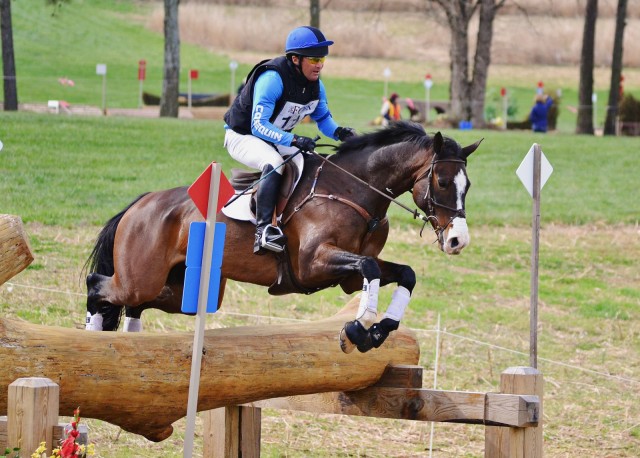 The USEF released the High Performance Summer/Fall Training Lists Wednesday night, and there are a number of changes from November’s Winter/Spring List. Who moved up or down? Who are the newcomers? Which names are noticeably absent? Let’s break down the movers and shakers.

Nineteen combinations make a back-to-back appearance from the last list. Jan Byyny and Inmidair moved up from the National to the World Class list thanks to their seventh-place finish at Rolex this spring, a performance that also earned them a spot on the U.S. World Equestrian Games alternate list. Buck Davidson also makes a repeat appearance, with WEG squad ride Balleynoe Castle RM and WEG reserve mount Park Trader both on the World Class list and Petite Flower on the National list.

Sinead Halpin and Manoir de Carneville also return to the World Class list after their strong showing at Rolex, which earned them a ticket to Normandy. Marilyn Little and RF Demeter, whose absence from the main WEG squad has been lamented by fans and supporters, also once again find themselves in the World Class category. After a string of unfortunate finishes at Badminton and Bramham, Clark Montgomery still squeaked into the World Class category with Loughan Glen and Universe.

Meghan O’Donoghue and Pirate continue to enjoy a spot on the World Class list; she’s the youngest rider to appear in this category. Doug Payne and Crown Talisman moved up from the National list to World Class after a top-10 finish in Saumur. Kim Severson and Fernhill Fearless jumped from the National list up to World Class, in addition to landing a spot on the WEG squad. Lynn Symansky and Donner round out the repeat pairs on the World Class list, beating the odds this spring to earn a spot in Normandy.

On the National list, Will Coleman and OBOS O’Reilly make a back-to-back appearance, as do Ellen Doughty and Sir Oberon following the disappointing end to their first four-star at Rolex. Will Faudree and Pawlow also return to the National list, along with Liz Halliday-Sharp and Fernhill By Night, our sole UK-based combination in that category. Lillian Heard and Share Option and Sharon White and Wundermaske are also once again on the National List after completing Rolex.

What about newcomers? Twelve combinations did not appear on the Winter/Spring List, most notably led by Boyd Martin and Shamwari 4, the sole pair in the Global Talent category. Phillip Dutton and Mr. Medicott held the honors as the sole combination in this category on the previous list. Boyd and Shamwari’s placement in this category — and on the WEG squad — reveals just how much they impressed the selectors in Germany.

In looking at other impressive movers on the list, Hannah Sue Burnett and Harbour Pilot are enjoying a spot on the World Class list after not appearing on the Winter/Spring list at all. They had a very impressive cross-country trip at Rolex, and that performance landed them on the WEG reserve squad in addition to securing a coveted World Class spot on this most recent training list.

Phillip Dutton and Trading Aces also take a spot on the World Class list despite the horse not appearing on the previous list. Oscar’s appointment to the WEG squad and this category on the list shows just how drastic his transformation has been since Boekelo last fall. Mighty Nice also did not appear on the Winter/Spring list but now has a spot on the World Class list, as well as the WEG reserve squad.

Lauren Kieffer and Veronica appear on in the World Class category after not making the cut for the Winter/Spring list. A fall at Boekelo was an unfortunate way to end their season, but they came back with a vengeance to finish second at Rolex, which also earned them a spot on the WEG reserve squad, though many fans hoped to see them on the team.

EN talent spotted Maya Black and Doesn’t Play Fair last fall, and since then, we’ve watched them go around their first Advanced, CIC3* and CCI3* with total ease. They were invited to the Winter/Spring training sessions, and now they’ve graduated to the National category in this most recent list.

Phillip ties Buck with three horses appearing on the Summer/Fall list. Nine-year-old Fernhill Fugitive seems to have finally hit his groove at the Advanced level with a second-place finish at Jersey Fresh CCI3*, and he’s on the National list as a result. Carolina Martin and Quantum Solace, her NAJYRC individual gold medal partner, are also newcomers to the National list.

Lizzie Snow and Coal Creek are another duo added to the National list in this most recent release, as are Sharon White and Under Suspection, her exciting up-and-coming mare who finished fourth in her first CCI3* at Jersey Fresh. In total, 29 pairs appeared on the Winter/Spring list, which increased to 34 pairs for the Summer/Fall list.

So who didn’t make the cut? Tiana Coudray and Ringwood Magister, who appeared on the Winter/Spring World Class list, are most notably missing. Though they fell victim to the Badminton cross-country course by missing a flag at Vicarage Vee and picking up another 20 at Huntsmans Close, they still completed the track, which is more than you can say for combinations like Andrew Nicholson and Quimbo, Mark Todd and NZB Campino, William Fox-Pitt and Parklane Hawk, and Mary King and Imperial Cavalier.

After being left off the WEG reserve squad and now dropping from the World Class list to no appearance at all, it could be that there’s a soundness issue we don’t know about. We sincerely hope that’s not the case and have reached out to Tiana for comment. If the horse is indeed sound, this is an odd omission.

Will Faudree and Andromaque are another pair who appeared on the previous World Class list but now are not on the list at all. Will withdrew Missie from Rolex after the same injury that kept her out of Pau flared up following The Fork. Their absence on this list is likely an indication that the injury is ongoing, and we wish her all the best for a full and total recovery.

Elizabeth Halliday-Sharp and HHS Cooley are another combination that appeared on the Winter/Spring list but are absent from the current list. Cooley earned a spot on the last National list after finishing third in his first CCI3* at Galway Downs last fall. He was seventh in the CIC3* at Ballindenisk in April and received a grant to compete at Saumur only to be withdrawn at the last minute due to a stone bruise.

And though they did not appear on the Winter/Spring list, Allison Springer and Arthur are also absent from the Summer/Fall training list. Unfortunately, their fairytale comeback at Rolex was stymied with a runout on cross country, and they also had a runout late on course at a similar angled brush fence at The Fork in their final prep run before Kentucky.