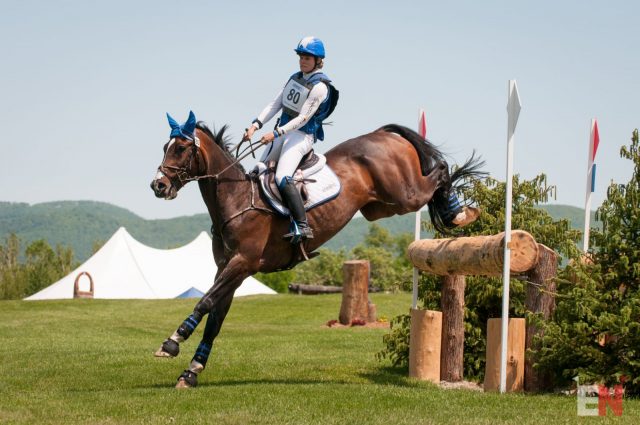 Jordan Linstedt and her and her mother Barbara’s 14-year-old Hanoverian gelding Revitavet Capato maintained their lead in the CCI3* at the Pedigree Bromont CCI Three-Day Event in Quebec with a clear cross country round and just 1.6 time penalties to add. They head into tomorrow’s show jumping with a rail in hand on a 44.8. Click here for the full report.

Jordan has produced Capato from his first event. Originally meant to be sold as a dressage horse because he was spooky and difficult in the beginning of his career, he’s certainly bold and eager to jump on cross country now.

“Capato was super from the beginning to the end. I don’t think he’s ever been this fit and he went out of the box pulling and pulled all the way to the end,” Jordan said. “I used to want to control him a little too much and today I found myself coming around the turns and doing a little bit less. It flowed from beginning to end; even with the hold it was very smooth.”

They were held early on course and were allowed to jump a warm-up fence before beginning again. “I’ve never been held on course with him so I was a little bit frazzled with how that was going to go from that point on … It took a few fences to get the groove back but the rest flowed really well.” 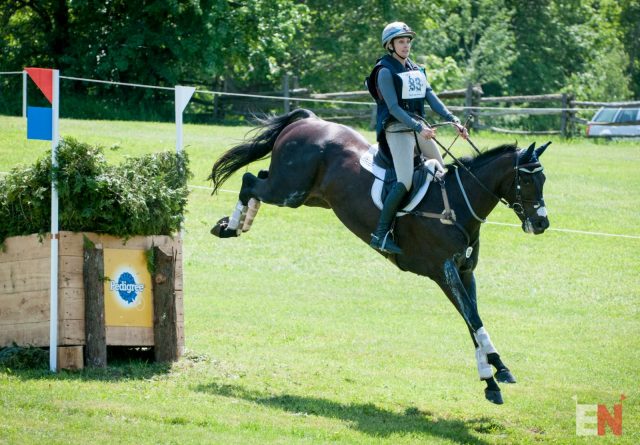 Frankie Thieriot Stutes and the Chatwin Group’s 9-year-old Oldenburg gelding Chatwin finished two seconds over the time to move up from sixth to second in the CCI3*.

“He felt really amazing. Actually the longer courses seem to suit him a bit better because I can get into a good rhythm with him. He had so much run left at the end I was actually surprised when I gave him a kick coming out of the last complex and he had so much left in his tank,” Frankie said.

“I had so much fun today. He’s such a special horse and I feel so lucky to be the one to ride him and compete him. This was his first CCI3* and I was really impressed with him the whole way around.”

Frankie had originally planned to take Chatwin to Jersey Fresh for his first CCI3* attempt but when he overreached in the wash rack after the first horse inspection she rerouted him to Bromont. Kelly Prather and Tamie Smith helped keep Chatwin going on the East Coast so Frankie could be with her son Drake at home in California. They had a final tune-up together at Virginia Horse Trials before shipping to Bromont.

“It’s incredible the village that’s behind you when you really need them to be,” Frankie said. “This will be my last three-day event for the year so I just want to have a good time with him. That’s been my whole goal all weekend is just to have fun with my buddy.” 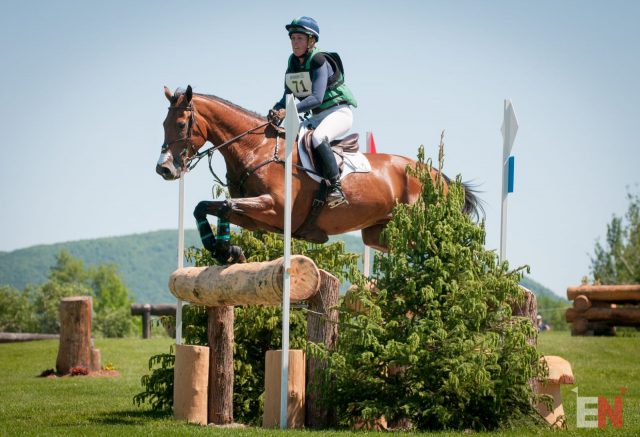 Kylie Lyman produced a clear round inside the time in the Bromont CCI3* with Joan Nichols’ 9-year-old Irish Sport Horse Lup the Loop for a second consecutive year. They moved up from eighth to third and are well in the hunt with a 52.2.

“Coming in here last year was easier because there was no pressure or expectations because it was our first three-star,” Kylie said. “Having him go so well last year, I tried not to let that play too much into my head coming here. I thought he really listened to me and came back where I wanted to. We got into a good rhythm right from the start.”

Bromont wasn’t originally on Loopy’s calendar. “I was going to give him a break this spring but he was so fresh at home I thought we better do a spring three-day!” she said.

“I think this course just suits the two of us really well. It suits my mentality riding cross country and he’s a big, bold, scopey horse. There were a few things similar to last year but there were definitely a lot of different questions. I think he’s a more grown-up horse this year but he was phenomenal last year, too.”

Kylie was also clear with 1.2 time penalties on Joan Nichols’ 10-year-old Irish Sport Horse Da Vinci Code and moves forward to the final phase in fifth place on 54.6. “He’s greener but really good. They’re totally different rides but he’s a scrappy horse and fights hard for it. He tried hard the whole way.” 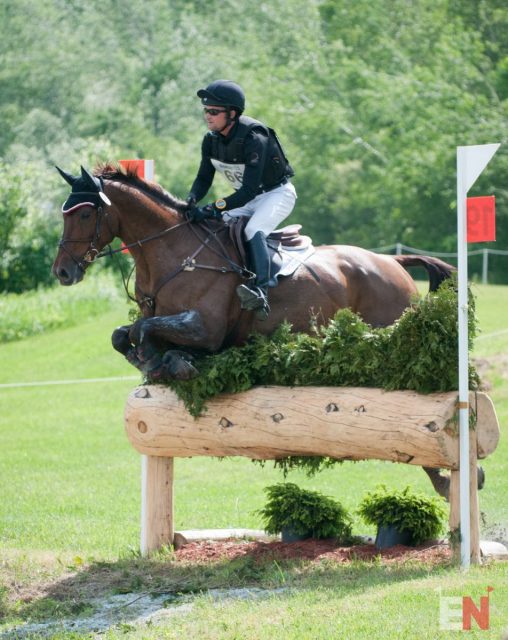 Waylon Roberts and John and Michelle Koppin’s 10-year-old Canadian Sport Horse Lancaster were one of five double clear rounds and had the fastest time in the CCI2* to move up from second to first.

“I’d had a horse on course already so I knew exactly where the minute markers were and had a pretty good feel for the course. Derek di Grazia’s done a really wonderful job. When you walk that course you go ‘whoa this is serious,’ but then when you go and ride it brings the best out of you and the horses,” Waylon said.

“I set out on Lancaster pretty quick. I think here at Bromont you want to be up on your minutes early and then cruise as the terrain gets a little tougher. That’s what I did and he answered everything just right. We’re looking forward to tomorrow and putting in the best performance that we can. The poles come down for everybody so we’ll see what happens!” 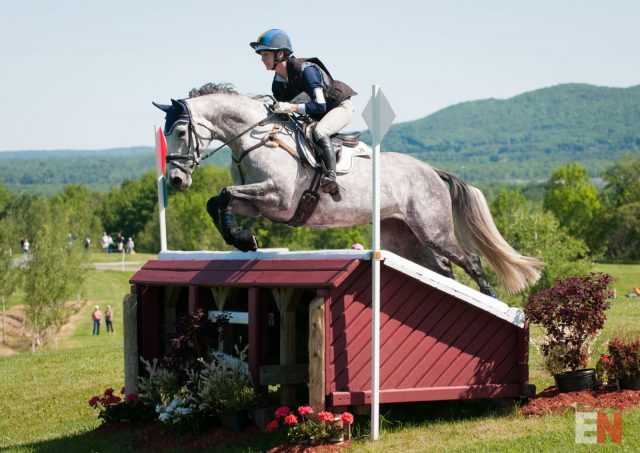 Kelli Temple piloted Kara Angulo’s 7-year-old Holsteiner mare Metallica to a clear round in her first FEI appearance. They crossed the finish line just one second over the optimum time and go forward to show jumping with two rails in hand on 31.9. Kelli imported the horse as a 4-year-old and credits Kara for producing her well and slowly. Kara competed her to Training level and Kelli has the ride for now to give her more experience.

“This was going to be a big test for her in so many ways. A bigger venue and a lot going on here. She hasn’t done that many big shows. The cross country is the biggest thing she’s seen and certainly the most complex,” Kelli said.

“With her I knew I needed to be a bit careful at some of those combinations because there were things she’s never seen before. I took time to square her up to things and give her time and get her back properly and land going. She answered every question brilliantly and she finished so strong … She’s such a wonderful horse for the future and she’s been stunning the first two days. What more could you ask for?” 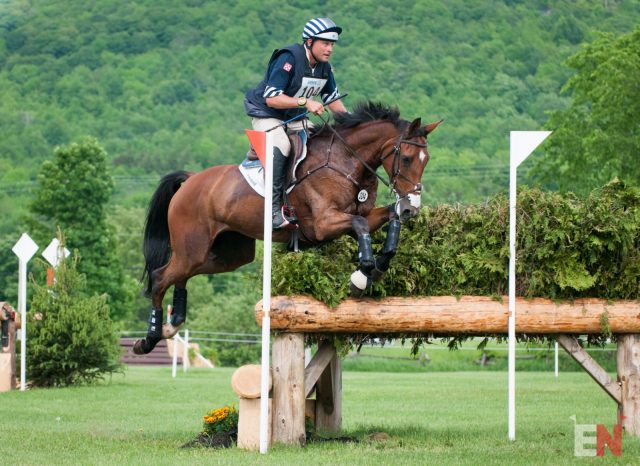 Our hearts are broken for Booli Selmayr, whose mount Jaeda tragically collapsed and died on the CCI3* course. We are also sending positive thoughts to Tamie Smith, whose mount Dempsey is at the University of Montreal Veterinary Hospital and preparing to undergo surgery for a fractured ulna.

While our hearts our heavy, Kelli helped us find the positive: The weather was on our side, and with minimal rain the footing was excellent. The courses were beautifully presented and there was great attendance from the local community.

“Everybody here at Bromont does such a beautiful job. We cannot say enough good things about it,” Kelli said. “The venue is just fantastic for the competitors, and the footing was fabulous. The course is tough but fair. It’s inviting. It really inspires you to ride forward and aggressively, and I think that you get such good rides out of your horses here and they learn so much.”

The final horse inspection starts at 8 a.m. EST tomorrow morning, so keep it locked on EN.