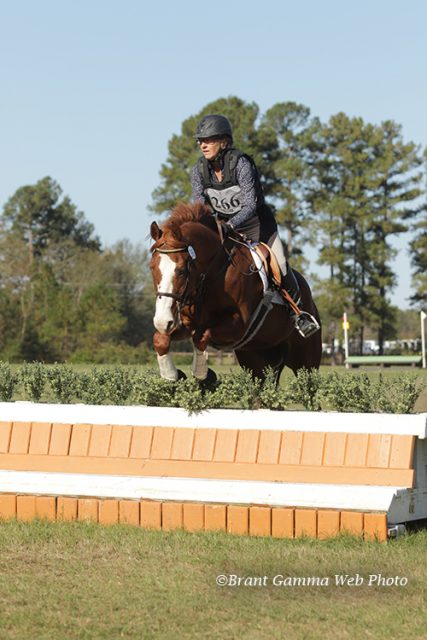 I discovered eventing rather late in life.

As a Pony Clubber in the 1960s, I grew up riding hunter / jumpers. Life happened and I didn’t ride for many years. When my children were finally grown, educated and gainfully employed, I found a trainer, Caroline Atherholt McClung, for dressage lessons. Something tame. Ha!

I didn’t know eventing existed outside the realm of Pony Club rallies or the Olympics or that ordinary mortals like me could do it, too. I didn’t fully appreciate what it meant that my new trainer had competed at Kentucky and Badminton.

Eventually Caroline led me to the dark side, and at the ripe age of 60 I competed in my first horse trial.

Almost all of my eventing career has been on Jay, Caroline’s chestnut paint gelding. We started at green, then advanced green, maiden and beginner novice — we competed twice in the American Eventing Championships at Tryon International Equestrian Center — and I thought I’d be happy staying at beginner novice.

But novice was beckoning me. Maybe, just maybe, with Caroline’s guidance, I could move up to that level. It was on my bucket list and I had no time to waste.

Unfortunately, Jay, now 16, began having some soundness issues. His barrel racing days, in addition to the fairly consistent work I had him in, were catching up with him. It wasn’t clear whether Jay and I would make it to novice.

About a year ago I started horse hunting. (Keep in mind I haven’t owned a horse since I was 18.) My plan was to find a novice packer; no Thoroughbreds need apply. Inexplicably I bought Leo, a lovely dark bay OTTB who had been beautifully trained in dressage and had been jumping for only a month. I guess you can’t help who you fall in love with … but that’s a story for another time.

While I was enjoying my new guy, all of the time off was doing Jay a world of good. He was as sound as he’d ever been and was jumping out of his skin. Caroline suggested we shoot for taking Jay to War Horse, a very nicely run schooling series hosted by the Carolina Horse Park
near Southern Pines, NC. (Caroline and her spunky little mare, RFH Hot Stuff, “Stella,” had qualified for the championships earlier in the season.)

It would be my first attempt at a novice horse trial.

Did I mention I’m 66? And that I’m a wife of 44 years and the grandmother of eight wonderfully brilliant grandchildren?

I wasn’t too worried about dressage or show jumping; Jay and I had already done a couple of novice combined tests. I was more concerned about jumping 15 to 16 obstacles on a cross country course without getting winded. Or scared silly. Not Jay — me. Jay would be fine.

As I filled out my entry form for the November War Horse, I realized with dismay that it landed on the same weekend as a concert I had long ago bought tickets for. Not just any concert, mind you, but a Frankie Valli and the Four Seasons tribute band playing at our local theater. The sixties! Jersey Boys! The music of my generation!

The concert was on Friday night, and usually War Horse schooling is on Saturday with the show on Sunday. However, this was their big year-end championship show, and they run it over two days rather than one. Schooling would be on Friday, and my division would have dressage and
show jumping on Saturday, followed by cross country on Sunday. If I couldn’t get there until Saturday that would mean Caroline would have to trailer Jay down the day before, and see to him and her own pony until I could get there. Not only that, I would miss all of the cross country schooling on Friday.

In true Scarlett O’Hara fashion, I decided I would worry about it later and sent in my entry.

A couple of weeks out I emailed the show secretary. I explained that I had a conflict on Friday night — shamefully I didn’t tell her what it was — and asked her if she would be so kind as to schedule my dressage test as late as possible on Saturday? Problem solved … or so I thought.

About mid-week we all got our ride times. My dressage test was at 9:24 a.m. on Saturday. Holy moly.

Did I mention it’s a five hour-plus drive from our location in Virginia to the Carolina Horse Park?

Now … the sensible thing would have been for me to give my concert ticket to someone else and travel to CHP with my trainer.

Instead, a couple of friends and I rocked to “Oh What a Night” and “Big Girls Don’t Cry,” among other hits (the group was fabulous, I hated missing the rest of the show), left reluctantly at intermission, drove to Greensboro in the rain, spent the night at a Best Western near the airport,
and got up at 5 a.m. to make it to CHP by 7:30 a.m. Got through my dressage test and show jumping (clean but with three time faults), operating on about five hours of sleep. Surprisingly, it was cool and cloudy and I felt pretty good.

That afternoon I walked the cross country course, and like other competitors had warned me, the footing was soggy because of the rain. The jumps looked big and not a little scary, compared to the beginner novice course I had done with Leo the previous weekend.

There was one combination at the top of a hill — a skinny roll top to a bank (5A and 5B) and then a left turn to number 6, a pheasant feeder. There was another offset combination followed by a long gallop through the infield to an imposing angled table. I had until the next morning to either buck myself up … or chicken out.

I was contemplating all this when another novice rider asked me if I was going to run cross country. She had just walked the course again, thought it was too wet and probably wouldn’t dry out overnight, and decided that she was going to scratch.

“I have a green five-year-old, and I don’t want to take any chances with him,” she said. All I could think to myself was, “She’s done prelim before, she’s not going to run novice and I am? Seriously?” By now I was getting a little panicky.

Did I mention Jay didn’t have studs? And that we missed cross country schooling? And not only had we never done a novice horse trial, we had never actually ridden an entire novice cross country course from start to finish?

Thank goodness for trainers. Caroline talked me through it. “You know Jay … if it’s between his ears he’ll jump it,” she said. “He runs up and down the mountain at home, he’s very sure footed. He knows his job. He’ll take care of you.”

The next morning when we checked our schedules I was shocked to see that Caroline and Stella’s show jumping time was five minutes before my time to leave the start box. It was very unlikely that Caroline could school us in the cross country warm up. Holy moly, again.

A delightfully energetic woman, Jane, who was my age and whose horse was in the stall next to ours, had ridden the novice course the day before. She sensed that I was apprehensive. “Let me put your fears at ease,” she assured me. “Once you get over the first fence you’ll be fine.”

So … with a fellow rider, Ashley, accompanying Jay and me to cross country warm up — she could peel me off the ground if necessary — I pulled up my big-girl britches and Jay and I schooled over a few fences. Normally I do not like to jump without my trainer, but I have to say, Jay felt like a million dollars.

At the same time my name was called to let me know I was on deck, I heard Caroline’s name announced in the show jumping ring. That sealed my fate, she definitely wouldn’t make it to cross country warm up in time.

“Ready as I’ll ever be,” I responded.

“The rider in front of you fell off, we’re giving her extra time to warm up,” he said. “If you’re ready, you can head on over to the start box.” Yikes. And holy moly, yet again.

Did you ever feel like the universe is trying to tell you something? I didn’t listen.

Jane was right, so was Caroline. As soon as Jay and I were on course and we got over that first fence, the rest was pure unadulterated fun. The combination I was so worried about? Easy peasy. That huge table? Jay said, let me at it.

We trotted and even walked in a couple of places — it was still a little slick — so we garnered 26.8 time faults, but I didn’t even care. Jay and I got over everything and we finished! I found out later that the rider who had thought about scratching, didn’t. She had a very successful run.

If I’ve learned anything from eventing, it’s this: A myriad of things have to fall into place to make it possible to ride and compete. A sound horse and rider; encouraging husband, family and colleagues; excellent trainer, vet and farrier; and of course, the funds to support the horse habit.
Being mostly retired doesn’t hurt, either.

I don’t know when or if I’ll do novice again, but I’d sure like to try. Jay and I need to step up our pace; that shouldn’t be too terribly hard. Or maybe I’ll get a chance to try it on Leo when he’s ready, he’s coming along very nicely. I’ll be 67 next year. I have no time to waste.

About the author: I’m an adult amateur, I live in Clifton Forge, VA, I’m semi-retired. I’ve been married to my college sweetheart since 1974, and we have three grown children (one of them is an equine vet), and eight grandchildren. RFH Jay is owned by my trainer and her husband, Caroline and Ashley McClung of Red Fox Hill Farm Eventing.