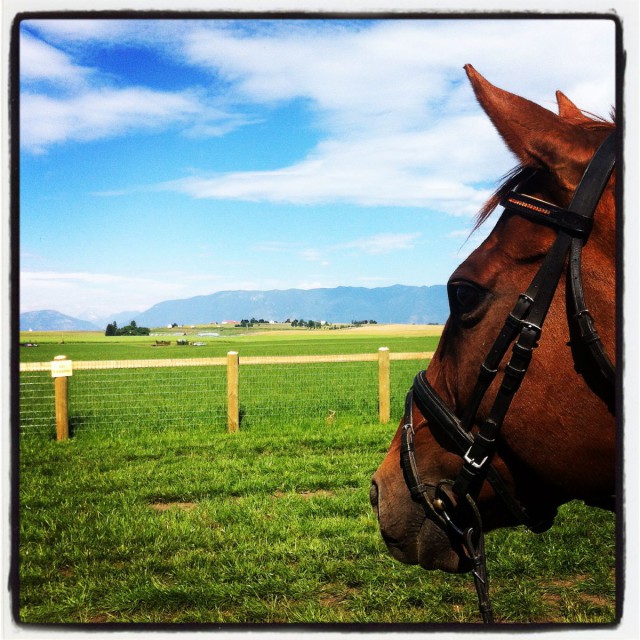 Sunny taking it all in. Photo by Jessica Kerschbaumer
Competing at Rebecca Farm has been on my bucket list ever since I started eventing.  Every year I would watch my fellow Alberta eventers excitedly plan, pack up and head out, and I would be cheering them on from home, glued to the computer obsessively refreshing Startbox and watching social media like a hawk.
The frequent question “Are you going to Rebecca this year?” was always met with a quiet “No.”  There was lots of different reasons why I didn’t go.  The distance, the cost.  The fact that up until not that long ago, Sunny and I were still majorly sucking at dressage.  Rebecca Farm was a big deal.  It is the premier event on the west coast.  I didn’t want to just GO to Rebecca Farm.  I wanted to compete and do WELL.
Somewhere along the line, I decided 2014 was going to be my year.
I couldn’t believe the sheer size of the place when we pulled in.  Everything was absolutely gorgeous and decorated, flowers everywhere, grass perfectly manicured.  You can tell that there were no shortcuts taken, no detail missed in the preparation of this event.
As we drove in and saw the first bits of the absolutely amazing cross country course, the excitement hit me full force and I was literally up on the dash of the motorhome freaking out and yelling like a crazy person about how awesome all the jumps looked!

What an amazing place!

As I let Sunny graze on the lush grass later that day, still looking around in awe, I got a big lump in my throat.  I had waited for so long.  I still couldn’t quite believe it, but I had arrived.  I was at Rebecca Farm.
Having a few days to settle in before the event, Sunny and I took full advantage of all the space to roam!  Riding on the roads and tracks in the canola field was amazing, a long format 3-day is definitely on my bucket list as well!
On dressage day, I was hoping we could pull off a decent test.  That is our Achilles heel, we school great at home, can have a nice warm up, but things fall apart in the ring.  Sunny surprised me by mostly keeping it together during our test! 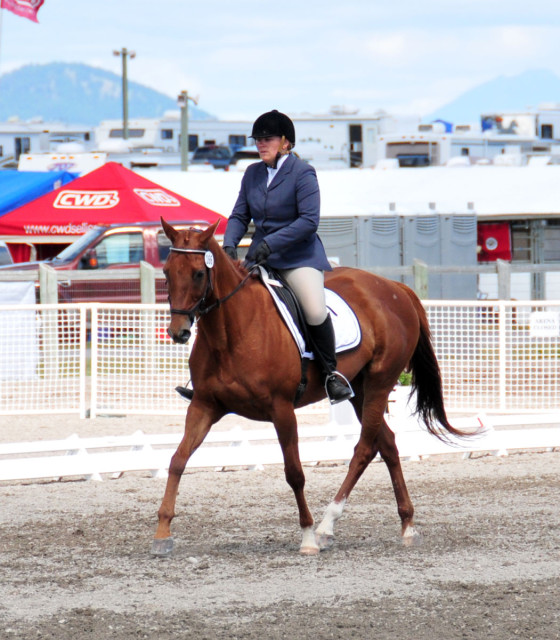 Sure we had some tense parts, and some classic Sunny flailing but nothing too major.  We had a lot of nice moments in there as well, and it was by far our best test so far this year!!  I was absolutely thrilled with a 40, which had us in 23rd place, just 14 points off the lead in a very close pack. 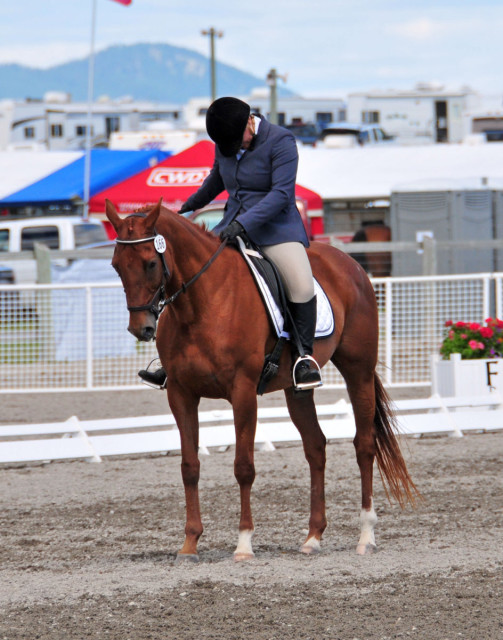 The cross country course looked SO FUN, I was ridiculously excited!  I was very happy to see it wasn’t just a straightforward course, Ian Stark had included lots of excellent questions for the level, really testing the accuracy and boldness of horse and rider.  This definitely wasn’t going to be a dressage show!!
Sunny came out on cross country day breathing fire! Our warm up was a bit exciting, she was broncing and bolting after each fence in protest as she just really wanted to get going already!
After we left the start box, Sunny was strong and raring to go, and once we had a small discussion after fence three and established some politeness and a better rhythm, we were rolling.
The course was amazing!!  Sunny was so brave and bold, and was with me every step of the way.  She made everything feel so easy, and even when I messed up a little and didn’t set her up quite right, she was like “I got this!” and on we went. 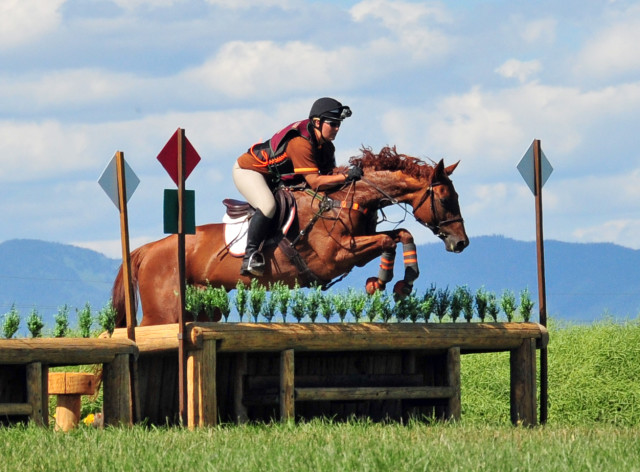 Over the bar jump! Photo by Kris Waldo

We came in just four seconds over optimum time, it was so hot I didn’t want to push too much, and I was having so much fun I forgot to check my watch until the end of the course anyways.  So we added just 1.6 penalties to our dressage score, and I was positively shocked and over the moon to see that after cross country we had rocketed all the way up into fifth place!

I was excited for show jumping.  The scores in my division were very close, really putting the pressure on, and I was confident we could do well if I kept my head and rode well.  We had an amazing round, with just one silly mistake on my part, I didn’t balance back enough to the final combination and we got in tight and had the last fence down.  I was still SO happy though, and it was good enough for us to hold our placing and finish in fifth! 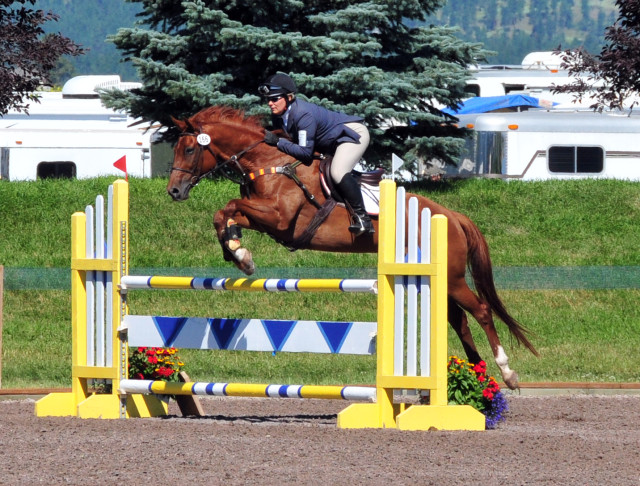 I definitely had a lump in my throat during the presentations, and during the victory gallop, hearing my friends that had driven down from Alberta to watch, cheering for me.  I was so proud of Sunny, she was an absolute rock star and always tries her heart out for me.  And proud of myself, for riding like I know I can and finally having all 3 phases come together.  I was even more thrilled to learn later that we had placed first in prelim for the team competition, and Sunny also received the TIP award for the highest placing OTTB in the preliminary divisions! 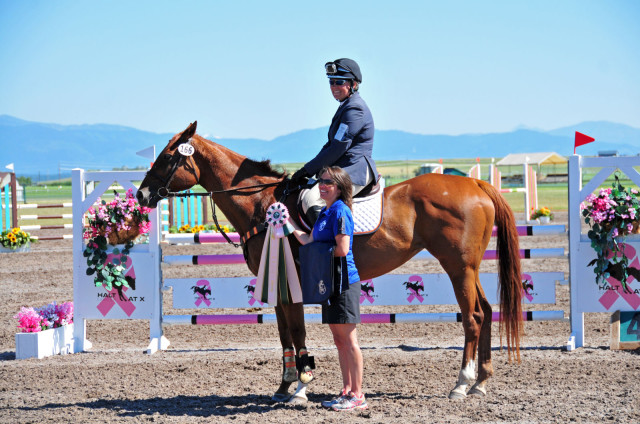 So happy! Photo by Kris Waldo

My goal for the event was to come away with a qualifying score.  To have such a great showing in my division was incredible all by itself, but to come away from my very first competition at Rebecca Farm with THREE ribbons??  It’s like a dream, I still can’t even believe it. 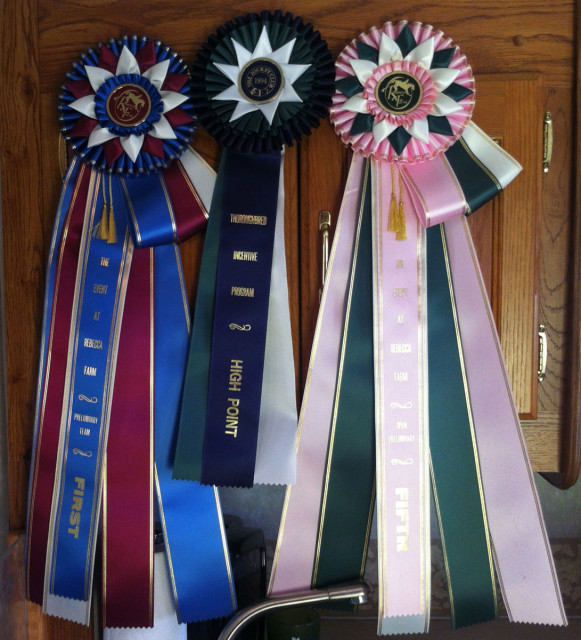 Other highlights during the week included tagging along on a course walk with Ian Stark, which was absolutely amazing.  Max Corcoran gave a stable management presentation at the Red & White Party, which was an abbreviated version of the talk she gave at the USEA convention, which was so educational and included a ton of information that it left everyone wanting more.
Watching the FEI levels was another highlight.  I haven’t had the chance to see much of the FEI stuff because we do not have any in Alberta, so it was absolutely fascinating to see all the jogs, the different horses and riders, and see the amount of work and attention to detail that goes into everything when you ride at those levels.  It makes me want to go home and dig in and work even harder to get there someday.
Sunny is currently at home in her big pasture enjoying a well deserved week off before we get back at it to prepare for the Leslie Law clinic and our last 2 events of the season.  This year has absolutely flown by! 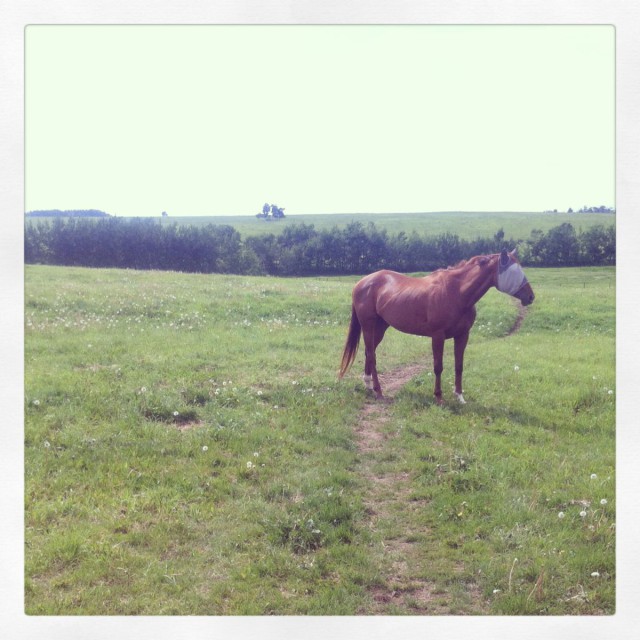 It was such an amazing week.  I’m already excited for next year!!  See you next year Rebecca Farm!