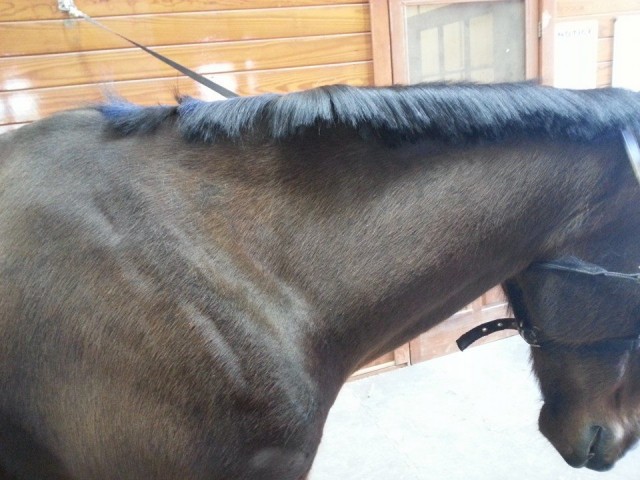 Mr. M after the battle.

You know how sometimes you just fall in love with a horse, instantly, even when it isn’t yours to ride or own? Well, this is how I felt with “Mr. M” (name changed to protect the guilty) when I met him a few years ago. I just love that big brown Irish boy.

Mr. M, however, probably doesn’t feel the same way about me as I do about him because I’m his groom. He hates being groomed. He especially hates having his mane pulled. The first time I tried it, I simply tied him near his hay in a stall, jumped on a braiding stool and started to pull it. He very gently, yet accurately, cow kicked me off my stool. “Well, OK,” I thought. I put him in the cross ties in the aisle and tried again — this time being VERY aware of his hind legs. He threatened to rear, flung his head in the air, twitched all his neck muscles like there were 4,690 flies on him, and tried to bite me while putting his shoulder into me and knocking me off the stool again. “This boy has skillz,” I thought.  I gave him a swift pop on the shoulder and told him “NO!” He glared. After trying about two more pulls, where he changed his repertoire of subtle attack just enough so that each time, I was knocked off the stool, I tried a Solo Comb. He submitted to the Solo Comb.

For a while, we had reached a truce. He would let me shorten his mane with the solo comb and thin it with scissors. But, of course, since he hates having his mane pulled, he’s also the kind of horse that grows a voluptuously thick mane in a matter of … days. Throughout the competition season, the size of his braids would grow, so I would put more braids in to keep them from becoming golf ball size. It worked for about two years.

Then, Mr. M decided he didn’t so much want to event anymore and became a foxhunter. We let his mane grow in the off season, and since it didn’t have to be braided, I didn’t so much worry about the thickness. Well, I’ve been gone to Aiken for a month, so in Mr. M’s mane growing time, that’s about three years. I returned to find a wild hairy Irish buffalo with a mane that most women could only dream of and a tail that touches the ground. If only he were a western pleasure horse. Yesterday, I ShowSheened his tail and brushed all of Sherwood Forest out of it. It took 40 minutes.

Today, I decided his mane HAD to be pulled. The old-fashioned way. I got permission to drug him a little so he didn’t get upset/I stayed on stool. I gave him the drugs. He looked calm. I put him in the cross ties and brushed through his mane with a hairbrush spritzed with ShowSheen. He glared at me, calmly. I reached down and picked up the silver pulling comb. Before I even touched him with it, he started to quiver and twitch all his neck muscles and shake his head. I glared at him this time. I pulled about three strands of mane. He cow-kicked at me, and I dodged it while staying on my stool. I was winning. I reached up to pull more. He shouldered me off the stool. “Fine then, more drugs.” I scurried in the tack room to draw up the same dose we often give for clipping. He acted insulted while I injected him, but I know Mr. M, and he likes to be dramatic.

I gave him a few minutes to marinate, and when I came back, he was standing with a hind leg propped and his two front feet were set wide apart, his “manhood” was relaxed and his head was being held up by the cross ties. “Ha, winning!” I said to myself. I gleefully hopped back up on my stool and thought about how pretty his mane was going to be. I reached for the silver comb, and he twitched his neck muscles. I could deal with that. I pulled some more. He shook his head/neck EVERY.SINGLE.TIME. I reached up to grab a section of hair and shook it out of my hands. I stopped for a minute, talked to him softly and reasoned with him. He was totally relaxed and swaying in his drunkeness. I reached up again to divide some mane into a section to pull. He threw up his big drunk head, shouldered me off the stool and gave the most uncoordinated cow kick ever. Uncoordinated, but swift. The dude has BIG feet.

I got out the Solo Comb; he wouldn’t have that either. He has had enough drugs to calm a rabid buffalo, but he can somehow rouse himself enough to run through his entire routine of tricks with enough will to make it impossible for me to shorten/thin his Irish Wild Mustang/Friesian/Gypsy Vanner mane. I am persistent, mind you. He cannot look like this.

I got out the scissors, held a crop in between my legs after showing it to him, and, finally, he let me at least cut/thin his mane with scissors and thinning scissors. As long as he doesn’t need to be braided, ever, we are going to be OK, Mr. M. and me. After his buffalo dose of drugs wears off, we are going on a hack to talk about his behavior and enjoy some 19-degree sunshine.