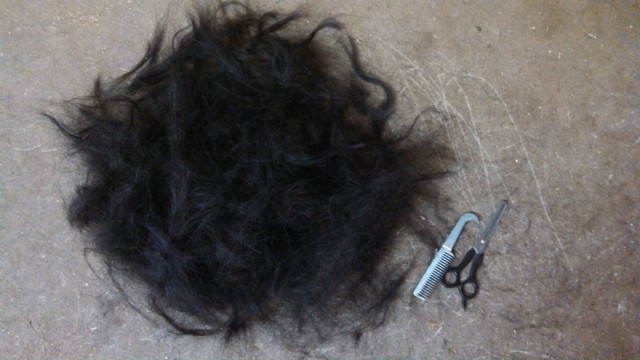 The Great Mane Massacre of 2014. Photo by Lindsey Kahn

I’ve always had a love/hate relationship with pulled manes. Sure, there are few things classier than a well-groomed horse with a smooth, even mane and tail trotting by at a jog, but I grew up adoring (and coveting) the long, wildly-flowing manes and tails of fantasy horses. My first horse was follicly-challenged, and I vowed that any subsequent horses in my possession would have manes that put Fabio to shame.

Well, I got my wish. I currently own a Rocky Mountain Horse and a Morgan, two breeds that are largely known for their tumbling tresses. My Rocky gelding has silky, flaxen hair that does a fine job of repelling flies and attracting mud, and my Morgan’s hair is just out of control. It’s like someone keeps slipping Miracle-Gro into his morning grain. And the funny part is that when I bought Onyx five years ago, he was embarrassingly lacking in the mane department. 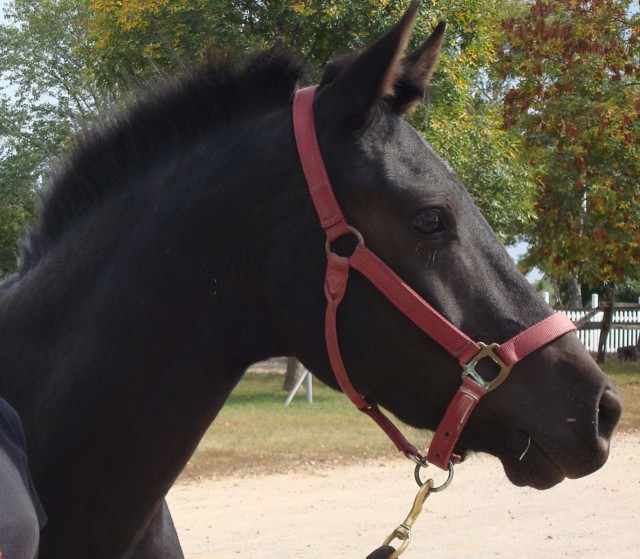 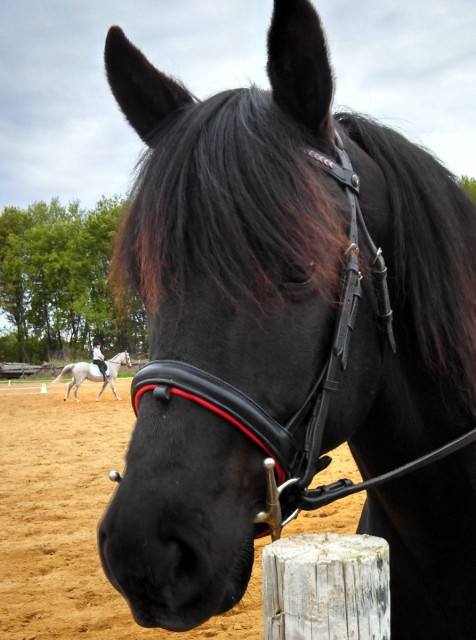 Onyx, age 7, after a haircut, rocking the “Shaggy Dog” look

Even with our first recognized combined test coming up, I’d been procrastinating the dreaded Pulling of the Mane. Last summer, I fumbled with reins tangled up in a frizzy mane, used gallons of ShowSheen and Cowboy Magic to manage the mass, and wondered how the heck a 14.2-hand-tall horse could have a bridle path nearly as wide across as my fist. Still, I refused to cut or pull his precious hair, turning instead to the web for tips on mane-taming.

One of the more common “quick” fixes is the French braid, which I tried with varying degrees of success. 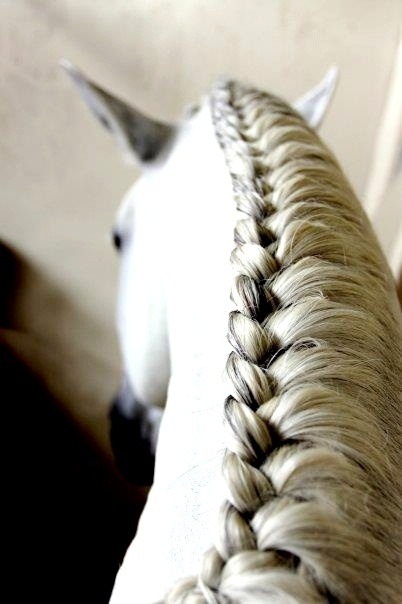 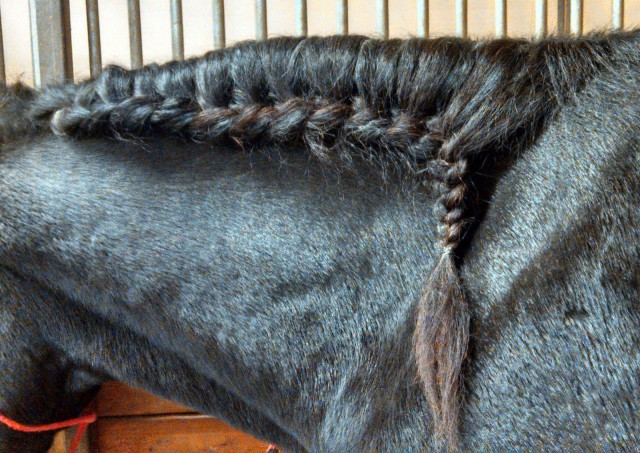 Hey, not too shabby! Photo by Lindsey Kahn 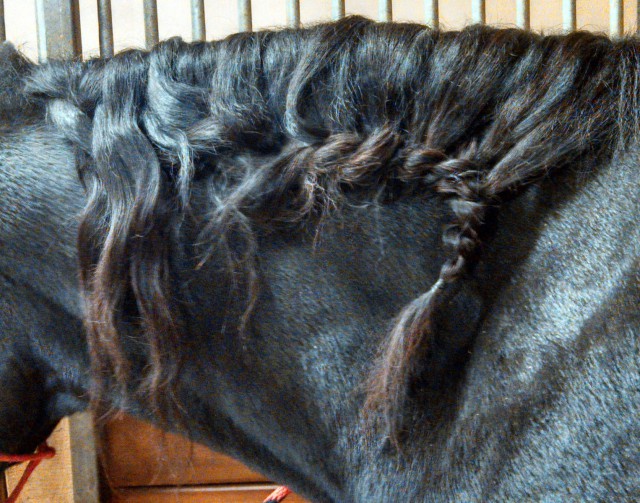 My next attempt was the button braid (or, as I prefer to call them, mane nuggets). This is where Onyx’s huge honkin’ mass of a mane really caused trouble, because his buttons were more like boulders. 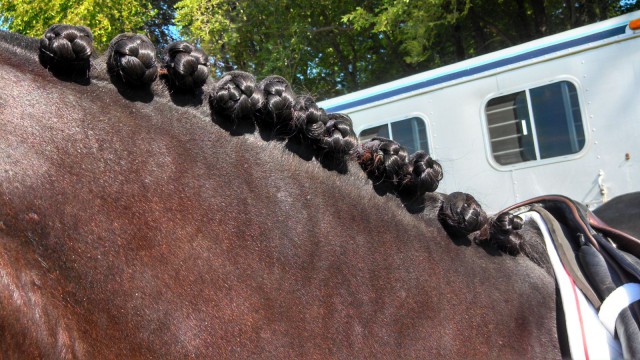 I found a handy Easi Plait kit at my local tack store, which consists of reusable fabric-covered wire loops that you can use to create a braided look without having to mess around with bands or thread.

Lo and behold, they worked like a charm! The only issue was that Onyx’s mane was so heavy that the Easi Plaits started to sag throughout my ride.

I didn’t want any awkward-looking tendrils during my dressage test, so I finally put on my big girl pants, borrowed a friend’s pulling comb and thinning shears, and took one last longing glance at Onyx’s long, flowing mane, the stuff that fantasies are made of. 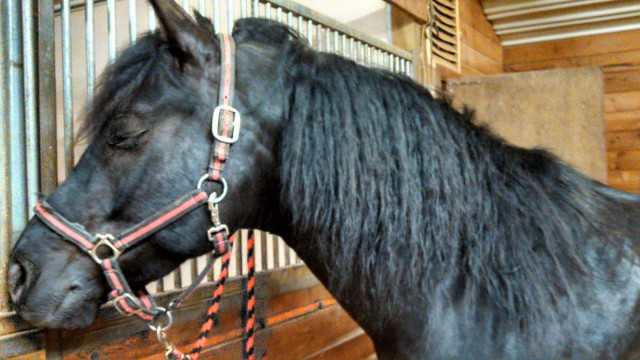 Once I got over the vaguely creepy feeling of yanking Onyx’s hair out by the roots, I soon found myself in the zone; I pulled like a woman on a mission. Really, his mane was just too much, I thought to myself. Keeping his mane long was no longer practical, especially considering how unkempt and downright nasty it was getting (let’s put it this way: it’s easy to pretend that dark horses are cleaner than they actually are).

After Onyx’s first Sweeney Todd treatment, I found myself standing ankle-deep in a pile of ebony hair. I looked like I had killed a small animal. Onyx, on the other hand, was starting to look a little more like a sport horse and less like a woolly mammoth. His mane was still too thick to lie flat on his neck, but at least it was more under control. I could always pull more later.

Wait… what? Did I just think to myself that I could always pull more later? What had I become?

A proud mama, that’s what. A proud mama who could now choose whether or not to grab mane over a jump. 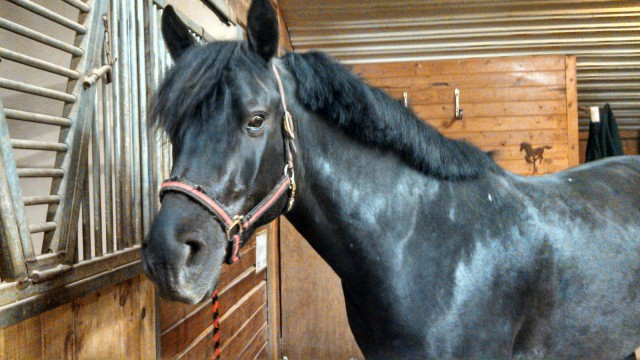 Oh, look. He has a neck! Photo by Lindsey Kahn