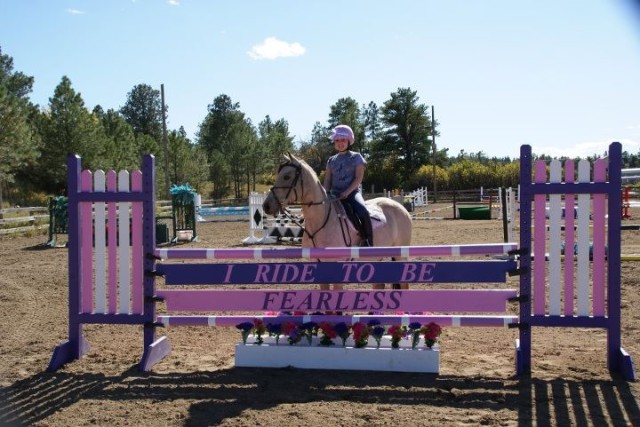 Avery Dudasch and Gracefully Dun. Photo courtesy of the USEA.

The USEA will introduce a new Adult Pony Rider Award at this year’s American Eventing Championships in honor of Avery Dudasch, who lost her battle to cancer at age 11. Her mom, Vicki, now campaigns Avery’s pony Gracefully Dun, keeping a promise she made to her daughter before her death, she told the USEA.

“When it came time to stop the fight, Avery’s biggest concern was Grace,” Vicki said. “She was so disappointed that she would not be able to ‘take her to her fullest potential,’ so I promised that I would do my best to make her dreams for the special dun pony come true. So, I ride her pony for Avery.”

The new Adult Pony Rider Award will be given to the highest-placed rider 17 or older who rides a pony 14.2 hands and under in the Beginner Novice, Novice and Training divisions at the AECs.

Jo Whitehouse, USEA CEO, said she has been asked countless times why the organization does not present an award to adult pony riders at the AECS, she said in the USEA’s announcement.

“Suddenly in my mind the USEA had found one of the best reasons in the world to create such an award: to honor the memory of a brave 11-year-old girl who fought a valiant battle to stay with her family and her pony,” Jo said. “Though Avery lost that battle, I hope we will all remember her every time an adult goes out of that start box at the AEC and cheer them on in Avery’s name.”

The USEA has much more on Avery’s touching story over at this link. Thank you to USEA for honoring Avery’s memory with this award. Go Eventing.

[The Memory of Avery Dudasch Lives On at the AEC]