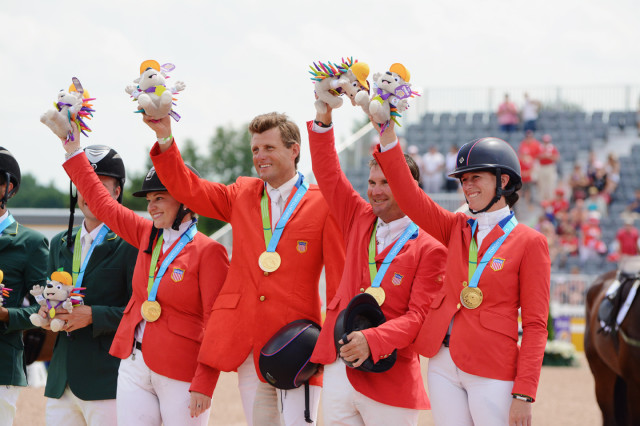 The money donated will support the USEF’s pilot program for Human Sports Science and Medicine (HSSM), which will work in tandem with the Equine Sports Science Medicine program, an approach that, according to a USET press release, “will allow riders to improve their preparation for and performance at Rio 2016 as well as other Championships by working on their imbalances and injury prevention.”

Riders’ trainers and sports science and medicine personnel will also be included in the coordinated efforts. “It is essential if performance is to be maximized that equine and human SSM personnel work together,” USEF Director of Sport Programs Will Connell told EN.

The fundraising is being run by the USET Foundation, but the program itself will be managed by the USEF Sport Department. Connell said that the resources will go towards developing and delivering the program, which includes bringing in experts in the field.

“We are finalizing the detail of how the program will be delivered on the ground and will work with athletes, the USOC and other key stakeholders once the program is ready to be launched,” Connell said. “We are very confident that as the program develops and the protocols communicated to human SSM practitioners, there will be tangible benefits for all riders.”

Bonnie Jenkins, Executive Director of the USET Foundation, told EN that the pilot program will initially focus on the athletes who could potentially be competing in Rio but will bring in other athletes across all disciplines.

“The ultimate goal of the program is to make sure we are helping athletes involved in High Performance,” Jenkins said. “Betsy is a trustee and owner. She sees the value in adding this program to the High Performance program. She stepped up with a wonderful commitment.”

Elizabeth Juliano, a USET Foundation Trustee and Chair of the Development Committee, dressage rider and high performance dressage horse owner, has committed to match contributions to the challenge, dollar for dollar, up to $100,000.

“We are extremely grateful to Elizabeth B. Juliano & Havensafe Farm for making this program possible,” Connell said. “We are certain that this program will benefit riders from across the disciplines and help them prepare for and perform at the forthcoming Games and Championships.”