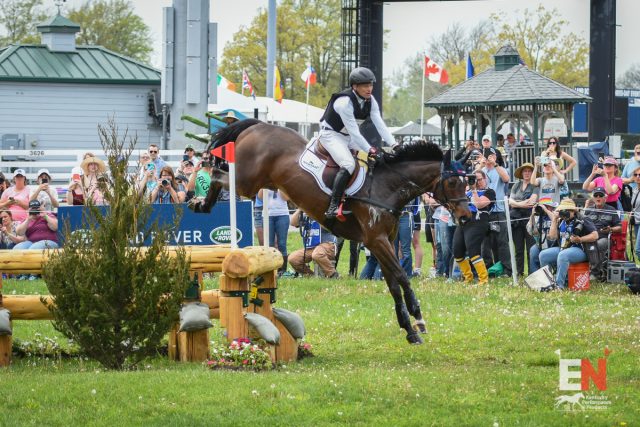 The Land Rover Kentucky Three-Day Event finds a sort-of-new home in 2023 with the announcement of US Equestrian’s partnership with ClipMyHorse.TV. Photo by Shelby Allen.

US Equestrian is pleased to announce a strategic partnership with ClipMyHorse.TV (CMH.TV) to host the USEF Network on the CMH.TV platform.

As the Official USEF Network Partner, CMH.TV will expand the reach of the USEF Network and provide an improved viewer experience for USEF Network events, including the extensive USEF Learning Center library, with easily searchable content and accessibility to view clipped rides. The new USEF Network powered by CMH.TV experience is scheduled to launch January 17, 2023 with featured events from Desert Circuit, Wellington Equestrian Festival, and the Adequan Global Dressage Festival.

“By joining forces with CMH.TV, US Equestrian will reach more viewers worldwide, introducing a broader audience to USEF-licensed competitions featured on the USEF Network and to our incredible range of breeds and disciplines,” said Bill Moroney, US Equestrian’s CEO.

CMH.TV will offer an exclusive 10% discount to all USEF competing members, subscribers, and USEF fans on annual CMH.TV premium subscriptions. Existing CMH.TV premium subscribers worldwide will now have full access to USEF Network content, which will also be available on the CMH.TV mobile app and smart TVs. The USEF Network will continue to offer a robust schedule of competitions such as the Land Rover Kentucky Three Day Event, the Devon Horse Show, and numerous USEF Championships.

Established in 2007, CMH.TV joined forces with FEI.TV in 2020 and is the world’s premier equestrian streaming and on-demand content platform with more than 2,500 events and millions of users around the globe. ClipMyHorse.TV hosts many of the top equestrian events in the world, including the FEI World Championships, FEI World Cup Finals, the Longines FEI Nations Cup Finals, and CHIO Aachen, to name just a few. The company combines its streaming service with a unique equestrian database, consisting of information on horses, pedigrees, results, and more.

This strategic partnership is part of US Equestrian’s multi-faceted strategy to increase the visibility and reach of U.S. equestrian sport, to diversify and grow revenue, and to keep costs down for members.

While US Equestrian has successfully grown the USEF Network to 50+ events with an audience of over 440,000 competing members, subscribers, and USEF fans, our goal is to showcase our events to a global equestrian audience through ClipMyHorse.TV and to engage mainstream sport fans through channels such as ESPN and NBC. Social media and original video content will continue to fuel US Equestrian audience growth as well. With more than 1.2 million followers across US Equestrian’s Instagram, Facebook, and Twitter accounts and more than 250,000 followers on TikTok, U.S. equestrian sport is fast proving its broad audience appeal across multiple digital platforms.