Pat Schmidt always does a fantastic job of keeping us up to date on what’s happening at Roebke’s Run in Hector, Minn., and he’s back today to give us an update on the major upgrades taking placing on the cross-country course. Pat reports that the new Intermediate fences will be ready in time for the summer horse trials, and a CIC* is slated for the fall thanks to the new course. Take it away, Pat! 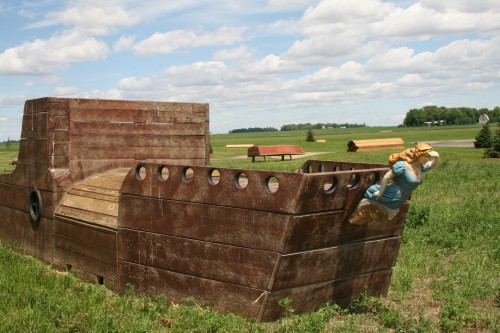 The Pirate Ship is just one of 32 jumps on the new course.

Nationally recognized cross-country course designer John Williams has spent considerable time and energy this past year upgrading the Roebke’s Run 86-acre cross-country course at Magister Equitum Stables in Hector, Minn., to FEI One Star rating status. He is a guy who knows his horses and who knows his courses. The FEI One Star rating promotes young riders to compete on the course and ultimately compete in the FEI North America Junior and Young Rider Championships. The Intermediate ranking will bring in the more advanced riders. “Putting together a course is actually like putting together a puzzle,” John said. “I have to come up with a track here that feels the way the riders want — forward, open and galloping, not tight and twisty.”

John explained that an event can include as many as five other courses being run on the same day that intermingle with each other. At the most, maybe two jumps out of up to 32 would be shared per level. Bumping up to Intermediate and one-star level is a big deal, but relatively easy to accomplish here with the team that Roebke’s Run has put together. There will be a total of three water complexes, a Weldon’s Wall, two coffin ditches and pirate ship jumps at the new water complex, along with four treasure chest jumps that have been added to the course as well. “The entire atmosphere of Roebke’s Run is very appealing,” John said. “As a team effort, we have managed  to pull it together.”

Cleon J. Wingard, a FEI/USEF licensed official, concurs. “The entire course has made very good use of terrain. This course is one of the best courses I have seen. In my opinion, the course will be an excellent choice for a FEI One Star event. I do not think USEA/Area IV could have a better event to host an FEI One Star.” At this point in time, Roebke’s Run coordinators Julie Schweiss and Brook Mead are planning to conduct the Intermediate trials during the Roebke’s Run events in July and October and have scheduled the FEI One Star event for Oct. 4-6. Roebke’s Run Summer Horse Trials are slated for July 12-13. For more information on Magister Equitum Stables or Roebke’s Run Horse Trials, visit their websites at www.magisterequitum.com and www.SchweissStables.com 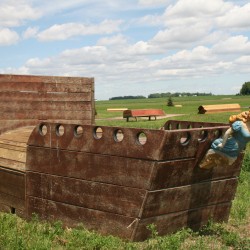 The Pirate Ship is just one of 32 jumps. 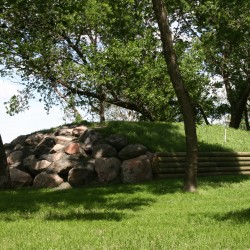 The Normandy Bank jump is nestled within the trees at Roebke’s Run. 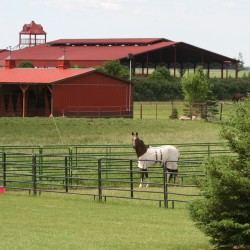 Magister Equitum is now able to stall a total of 228 horses.