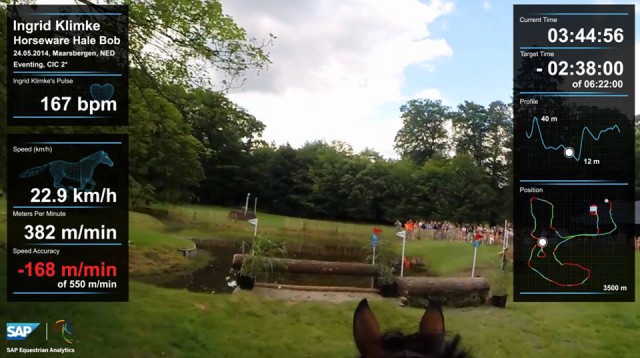 A look at Ingrid Klimke and Horseware Hale Bob testing the software at Maarsbergen CIC2* in the Netherlands. Photo via SAP Sports Facebook page.

German software company SAP has developed a revolutionary new program that will totally change the way spectators watch and interact with cross country at major competitions. Called SAP Equestrian Analytics, the software tracks individual routes, speed data, time gaps and competitor heart rates, which integrates into an interactive competitor chart and leaderboard in real time. The interface can also be merged with a rider’s helmet cam footage to stream the data alongside the video.

SAP developed the software in partnership with Ingrid Klimke, and the program will debut next weekend at CHIO Aachen. “I am excited to use this innovative technology to present and explain specific new aspects of my rides to my fans,” Ingrid said in a statement. “For the first time, I will be able to give them a better understanding of the ‘why’ and ‘how’ of the action on the course.”

It’s unclear at this point whether spectators will be able to access the software via an app on their smart phones or tablets, as the program is still in its test phase. You can see two brief clips of Ingrid and Horseware Hale Bob testing the software at Maarsbergen CIC2* in the Netherlands starting at about the 55-second marker in the video below.

This is very similar to the technology we saw last fall in Doug Payne’s helmet cam video from the Dutta Corp Fair Hill International CCI3*, when he merged GPS and heart rate data with the footage. The difference is SAP’s software allows the data to stream in real time as the horses are out on course — pretty cool, right?

SAP also partnered with Aachen to develop the app for this year’s competition, which introduces some cool new features. Most notably, the app unveils “Audience Judge,” which allows spectators to score each movement of every test in the pure dressage classes. The audience can then see how their score compares to the actual score awarded by the judges.

The app also includes “Guess the Winner,” which allows spectators to pick who they think will win in each class. Throughout the competition, the announcer will reveal who the audience picked to win through the app. It looks like Aachen is still loading in the entry lists, but be sure to download the “CHIO Aachen” app and pick Clark Montgomery and Loughan Glen to win the CICO3*.