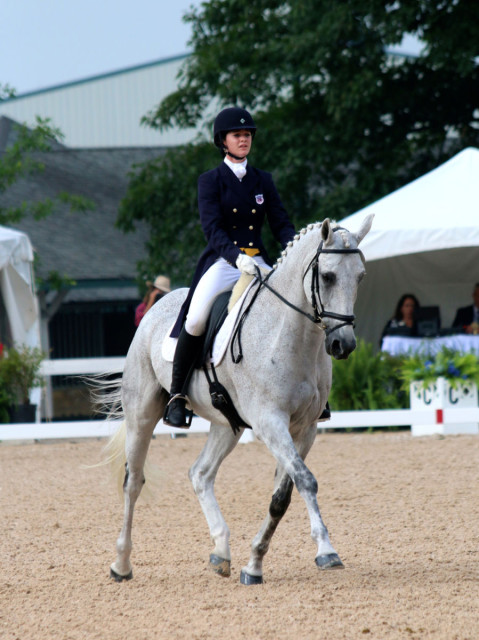 Area III’s Nicole Doolittle didn’t let the fact that she was the first competitor in the CCI2* ring this morning at the Kentucky Horse Park for the Adequan FEI NAJYRC bother her too much, and rode one of her best tests at the level on the experienced grey gelding Tops, to hold a commanding lead throughout the small, four horse division on a score of 47.7.

“I’m so, so happy with him, he was amazing today. I’ve been lucky to do this 2* test twice this year and it’s quite different than in years past but today it flowed really nicely and I was super happy with it. Yesterday when I found out I was going in first I was a little nervous originally and then he came out in warm-up today and was just fantastic and all the nerves just melted away.”

Nicole actually followed her older sister Jamie into the ring; Jamie did the test ride on her dressage horse Talisman, a 12 year old Andalusian. Jamie did the CCI2* in 2012 with her mare but then switched to dressage after an accident led to her having to put her down. T

alisman was imported here from Spain (yes, the Spanish Riding School!) about a year ago and was doing just his 8th show ever; Jamie offered to do the test ride as she’s grooming for Nicole this weekend and thought it would be a good opportunity to see how Talisman reacted in a big arena and atmosphere, “He was definitely a little lit up but he was a good boy, I’m proud of him”. 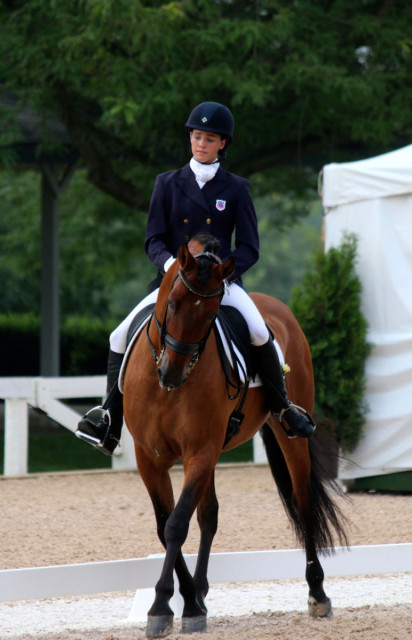 Jamie did her first NAJYRC in 2010 and Nicole groomed for her then, and “we’ve been bouncing back and forth until now, and so I think we both kind of know how we react, and how we handle nerves and stress, and we’re a pretty good team. She knows exactly what to say to calm me down. We’ll give each other advice if it’s really obvious but otherwise we’ll try to stay out of coaching each other – we’re sisters and we’re only a couple of years apart so it can get a little…you know! But we do help each other out!”

Nicole was never in any doubt about coming to the Kentucky Horse Park to contest the 2* division regardless of the recent rule changes and tiny division, “The footing was incredible especially after all the rain we’ve had lately; the Kentucky Horse Park has done a beautiful job of draining what needs to be drained and the dressage footing was just incredible. It’s a bit disappointing that more people didn’t come but for me at least this has always been the best 2* there is, the best type of courses, the best atmosphere for Young Riders, so this has always been a goal for me all year and I like to stick to it.” 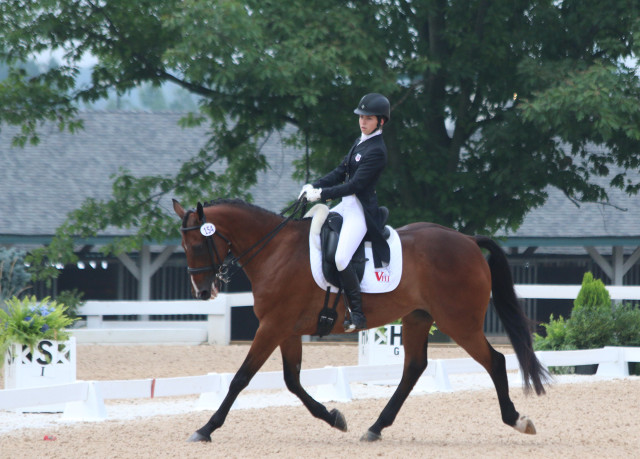 Local rider Paige Pence rides with Area VIII coach Cathy Weischoff fairly regularly, and was overwhelmed at the end of her test on Class Action, “He was really good, he was such a good boy, it was one of the best tests I’ve ever had so I’m very, very happy so I’m in tears he was so good! A few sticky moments but overall really, really good. We had a couple of sticky moments in the warm-up with the turn on the haunches, but we pulled through and I’m just really happy with the way he performed.”

Being from Louisville, the surroundings were pretty familiar to Paige, “We come here all the time, it’s like our back yard, the horses are really familiar with the turf and everything so it puts a little less pressure on them.”

Paige’s score of 59.6 leaves them in 2nd place going into the cross country phase, and she agreed with Nicole that it never occurred to her not to come to NAJYRC this year, “I was always going to come. I worked really hard to qualify for the 2* and when I found out that it wasn’t going to be a championship I said, ‘you know what, I worked hard to be here and I’m going to represent Area VIII and still do the 2*.’”

Diane Portwood and Cinerescent slipped into 3rd place for Area III. Diane is a working student with Kyle Carter and has had the grey mare for three years since she was a nine year old – before that the OTTB had been languishing in a field for seven years, and they’re veterans of the CCI* here at NAJYRC in 2013.

Diane admits that dressage is not her favourite phase and that she gets nervous, “It felt a little bit tense but I always struggle with that, I tend to freak out in there! I was really happy with her though, I think we put together our most consistent test yet.”

Interestingly Diane said that both Leslie and Kyle coached her two completely different things to achieve the same thing! (Much more in the press conference video to come soon!) The mare has yet to have a cross country penalty so Diane is looking forward to Saturday, “She’s a fantastic horse, she’s so kind, I’ve been really lucky to be able to have a horse like her.” 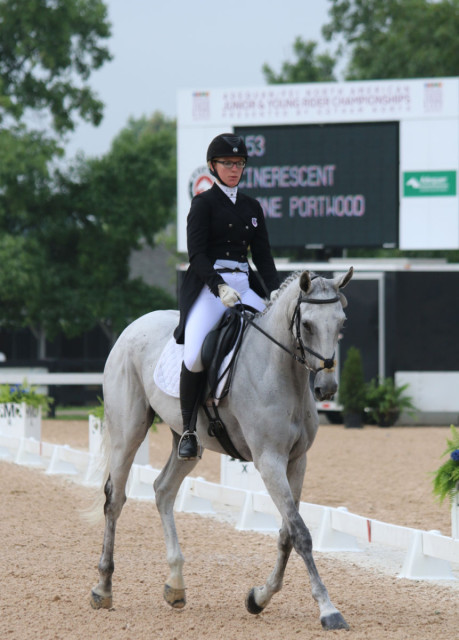 Cinerescent had most of last year off with a coffin bone bruise and just started back again in November.

Diane works out for a couple of hours every day at the gym doing Crossfit or Mixed Martial Arts after a full day’s work at Kyle Carter’s barn, and plans on running round the cross country course herself at least a couple of times before she rides it; in the fall she’ll start a double engineering degree at the University of Georgia, “I graduated a semester early from high school and then took a gap year, and I’ll actually be starting as a sophomore because I took so many AP classes in high school that I have the credit hours to start. I’m excited but at the same time I love Kyle’s program and I’ve been super involved in it and it will be really hard to leave. We’re hoping to move Cinerescent up to Advanced in April and 3* next year, and I’ll have to figure out how to balance that and a double engineering major but I’ll do it!” Impressive much?! 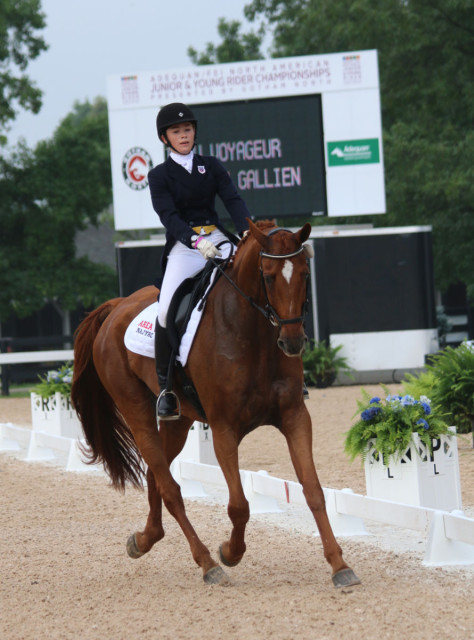 Massive props to Area 1’s Madison Gallien who rode with such grace when Beau Voyageur threw all his toys out of the pram and refused to play nicely; she handled him beautifully and got through it as calmly and efficiently as possible when for a moment it looked like she might not even get into the arena, and then at times perhaps not complete the test. Even more impressive were her rueful smiles for her team and crew as she came out, and her fabulous attitude at the press conference later.

We’re uploading the video of the press conference with all four ladies as we type this, and you’ll see for yourself what a classy bunch this division is, and we’ll put tons more of the dressage pictures on our Facebook page.

Wishing them all super rides on Saturday, and looking forward to chatting to them, and getting to know them all a bit better this weekend. Well done ladies, and all your hardworking teams today. Go NAJYRC and Go Eventing!