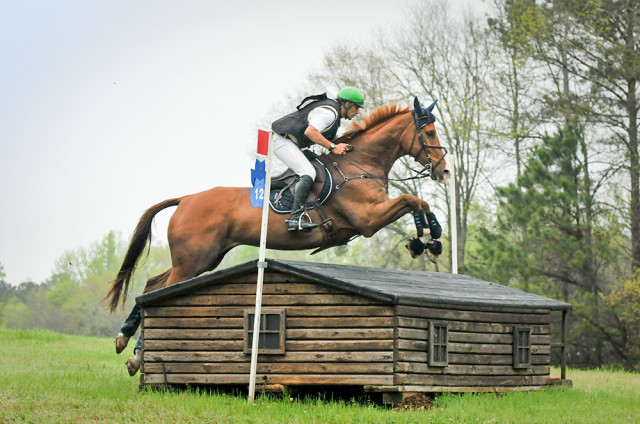 Time became the deciding factor in the Poplar Place Farm CIC3*, and Nilson Moreira da Silva (BRA) and Muggle came out on top with the fastest clear round of the division. The event was a good lead-up for the pair’s first CCI4* attempt coming soon at Rolex Kentucky, and Nilson was clearly very pleased with his results.

“Muggle is getting better and better. We have finally started to figure out the dressage and I’m really happy with his score. He jumped beautiful this morning in show jumping and he showed in the cross country how good he is coming,” Nilson said.

The pair scored a 48.2 in dressage to secure second place. One rail over a tough show jumping course dropped them to third, but a clear round and only 5.2 time penalties to add on cross country resulted in a win with ten points to spare.

Nilson and Muggle, a 12-year-old Thoroughbred cross gelding owned by the Phoenix Syndicate made up of Nilson, Melissa Stubenburg, Laura VanderVliet and Kathleen Overbaugh, have now completed ten three-stars together over the last three years. They qualified for Rolex last year, but Nilson ultimately decided they needed more experience. Now they aim to tackle their first four-star in April and are on track to represent Brazil at the Rio Olympics this summer.

Nilson receives help from his partner, Laura VanderVliet, at home and receives coaching from Bruce Davidson as well as the Brazilian team coach Mark Todd. All three will be there with him in Kentucky. “I can’t ask for more,” Nilson said.

A three-star win isn’t the only thing to make today special. Nilson met Laura at this event five years ago not long after he moved from Brazil to the U.S; Nilson began his eventing career here and he and Laura now have a business together, L & N Equestrian. Today is also Nilson’s mother’s birthday.

“Looking back five years ago and how far I’ve come, that’s because I have really nice people behind me. I have my owners Melissa and Kathleen and my sponsors Antares and Triple Crown. I’m going to try to do the best I can. I have a really good team supporting me. I can’t ask for more.” 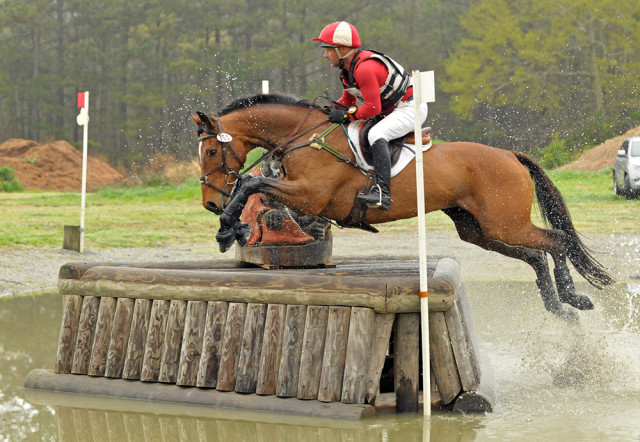 The general consensus among the riders I’ve spoken with is that even though some places on course are a bit heavy from Thursday’s deluge of rain, they were glad for the softer ground. Joe Meyer (NZL) and Clip Clop skipped across the course as the three-star division’s trailblazers, adding 11.2 time penalties to finish in second place on a score 67.6, moving up from ninth place after dressage.

“Clippy,” a 13-year-old Irish Sport Horse owned by Joe, Madison Foote and Theresa Foote, will also be making his first four-star appearance at Rolex in April. Joe brought him to Poplar for a good fitness run. “He was good on the hills and that’s what we really needed. We still have a bit more fitness to do the next couple of weeks,” Joe said. “He’s getting much more settled and much more relaxed. A year ago he was still massively wound up at the start and really quite a handful. He’s much quieter now.”

“We were going at a good clip but not flat out. When I got back I was a little disappointed because I had a couple of waiting distances and should have [moved on]. Saying that, you do have a couple of butterflies when it’s your last planned run before a real big one. It’s nice to get that out of the way.”

While many Rolex-bound riders plan to run once more at The Fork, Joe is opting to do the Advanced-CT at Ocala and some show jumping at Longwood in addition to their fitness work. 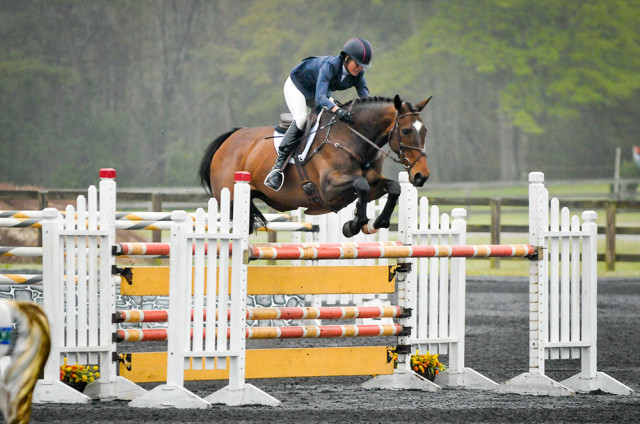 Julie Richards and Sandhills Brillaire were fifth after Friday’s dressage on a 50.2. This morning she and the 14-year-old Thoroughbred/Warmblood mare produced the only double-clear show jumping round in the division, moving into second place. Time penalties on cross country dropped them to third, but Julie is thrilled with the mare’s weekend and is looking forward to continuing to develop their partnership.

“The horse is the most genuine-minded horse I’ve ever ridden,” Julie said. “I’ve had so many Advanced horses, and she’s the calmest horse. I don’t know if it’s intelligence or what, she just knows the job. She’s such a good animal and she’s always giving you everything she has.”

Julie got the ride on “Sparkle” in October 2015, when the Richards family bought her site unseen from her breeder Chris Barrett in Australia, who piloted the mare to a win at the 2012 Adelaide CCI4*. Now owned by Equine Olympic Investments, she is aiming for the Summer Olympics and nearly have their qualifications in order. They will aim for the Ocala CCI2* in April and if all goes well compete in the U.S. Olympic Selection Trials at the Jersey Fresh CCI3* in May. This event was their first Advanced together.

“There were little things I know we can improve, but her dressage is getting so much more connected with me,” Julie said. “In show jumping she is so careful. Cross country was good. It was not overly huge but there was enough out there. I just stayed confident and rode as fast at the jumps as I would at a proper three-day, I just didn’t pick up the gear in between.

“At Ocala I will do the best dressage I can, I don’t want to leave one mark out. At Jersey, I better be competitive. I’ll be trying to make the time there. I set the goal to get her qualified [for the Olympics]. When I started I thought how far fetched it was, now it’s starting to feel like it could be a reality.” 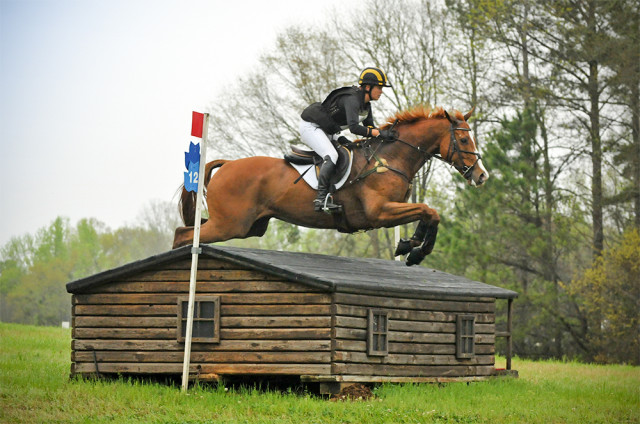 Katie Ruppel and her own 12-year-old Thoroughbred gelding Houdini held their lead after this morning’s show jumping, lowering one rail but entering cross country with a fair amount of breathing room. They were clear, but a few too many time penalties dropped them to a fourth place finish on 72.3.

Katie and Houdini will be making a return to Rolex this year to contest North America’s toughest track for the third time. “He’s going better than ever right now. I took him to France [for Pau CCI4*] last fall and we didn’t get the results we wanted, but I feel like the trip helped him and made him grow up. It was a really good experience for him. Hopefully he will not be so wide-eyed going into Kentucky this year and he will perform much the same as he did this weekend.”

Katie and Houdini were the only pair in the division to crack the 30s on Friday’s dressage. They scored a 37.1 to take an early lead. “He’s always been a pretty good dressage horse, but he’s a little quirky, hot, sensitive and nervous. Getting him to the ring takes quite a while but finally at 12 years old I think I have finally figured out what works for him and it seems to be working better and better. I’m really pleased with the test he put in.”

Katie has had Houdini since he was a 2-year-old and produced him up the levels. “He’s a pet. He’s my buddy. He’s really a very sweet horse,” she said. “I want to have fun. He’s my own horse. I own him and I’ve had him for ten years. I just want to enjoy him at the top level. He owes me nothing.” 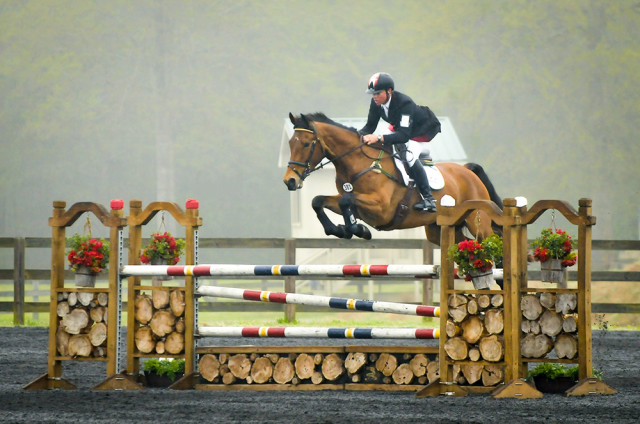 Karl Slezak (CAN) and Fernhill Wishes, a 7-year-old Irish Sport Horse owned by Karl and Kirk Hoppner, held fast to their lead in the CIC2* to win handily on a score of 47.4. The pair scored a 37.8 on the flat to take an early lead. A double-clear show jumping round followed by a clear cross country with 9.6 time penalties secured a win for the young horse in only his second two-star appearance.

Nilson Moreira da Silva and Cash, an 8-year-old Thoroughbred owned by the Phoenix Syndicate, rocketed up the leaderboard today. They were 12th after dressage on a 53.6 and posted two clear jumping rounds and adding 6.8 cross country time penalties on cross country to finish second.

Likewise, Lizzy Jahnke and Princeton moved up from ninth place after dressage to finish in third on a 61.6. In their first two-star as a pair, Lizzy and the 10-year-old Thoroughbred owned by Light Speed Equestrian, LLC jumped double-clear in show jumping and added only time penalties to their score on cross country.

Maren Foster and Caribbean Soul led from start to finish in the CIC*, adding 10.0 time penalties on cross country to finish on a 53.4. Haley Currey and Resolute Protector were second with a 58.2 followed by Susie Beale and her own and Leslie Collins’ Amasing F who finished on the same score. 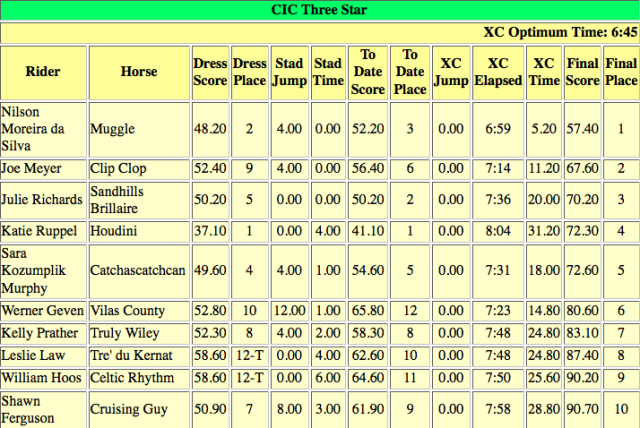 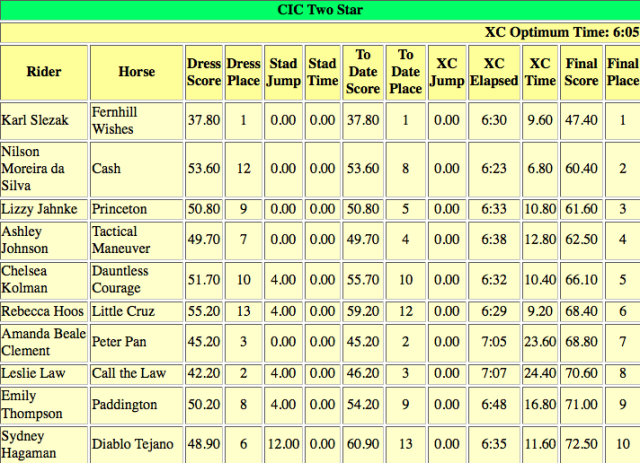 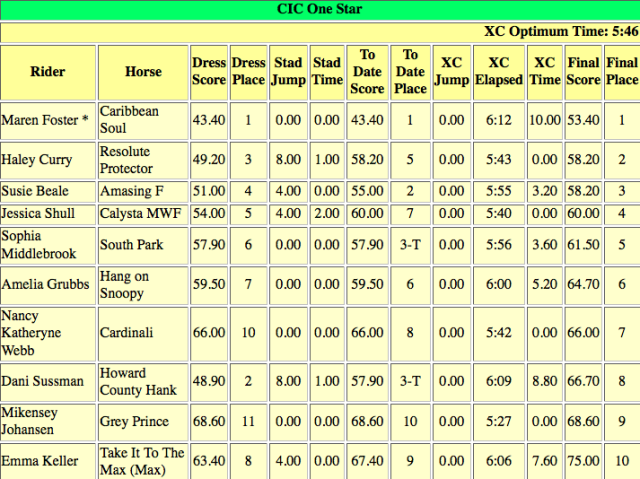