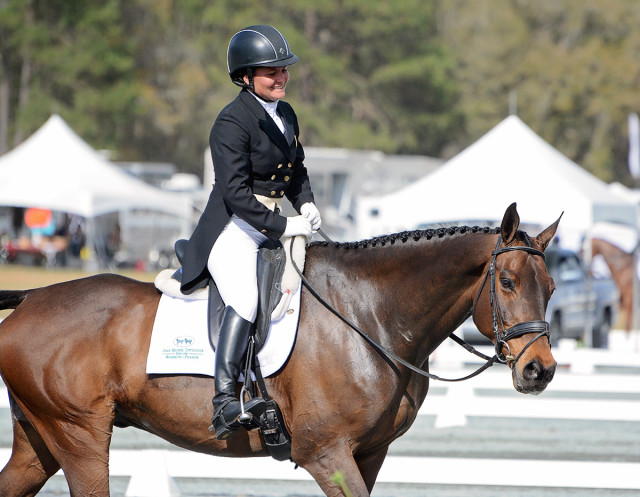 Hannah Sue Burnett and Harbour Pilot haven’t competed at the FEI level since the Land Rover Burghley Horse Trials in 2014, but you wouldn’t have known it watching them today at Red Hills. “William,” a 13-year-old Irish Sport Horse gelding owned by Jacqueline Mars, delivered a beautiful test with Hannah in the irons to firmly take the lead on a score of 40.4 after dressage.

Though Hannah and William were sitting inside the top 10 at Burghley after a clear cross country trip, a tendon injury forced his withdrawal before show jumping. After giving the horse a full year off, William started jumping again last fall and eased back into competing last month.

“It was so exciting and then so disappointing (at Burghley) when we didn’t get to jog up, so having him back in action and having him compete so well is just really cool,” Hannah said. “He’s definitely happy to be here and excited. He’s grown up a lot in a year having some time off.” 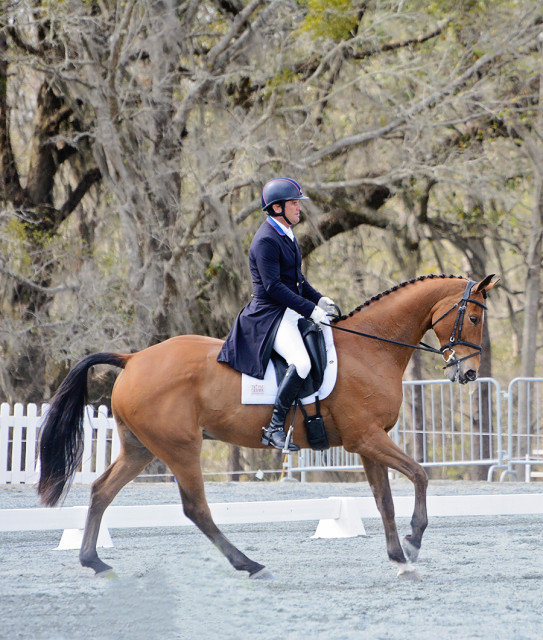 With a goal of making their second trip to the Rolex Kentucky Three-Day Event in April, Hannah said she won’t hold back when tackling Mike Etherington-Smith’s new CIC3* cross country course tomorrow.

“I’m really happy to be riding such a campaigner at this level. He’s really good, but at the same time, he hasn’t been at this level in awhile, so I definitely need to be on my game,” Hannah said. “There’s definitely enough to do. I really like how (the course) builds. I think it’s really nice in the beginning. The time in insanely tight. I’m going to ride as well as I can and give it a good go.”

Phillip Dutton and Fernhill Fugitive sit in second place in the CIC3* on 42.4 at the conclusion of dressage. With horses like Mighty Nice and Fernhill Cubalawn as his stablemates, “Jack” has been waiting patiently for his moment in the spotlight. After winning the Galway Downs CCI3* last fall and now sitting in a close second at Red Hills, it’s clear the horse is coming into his own. 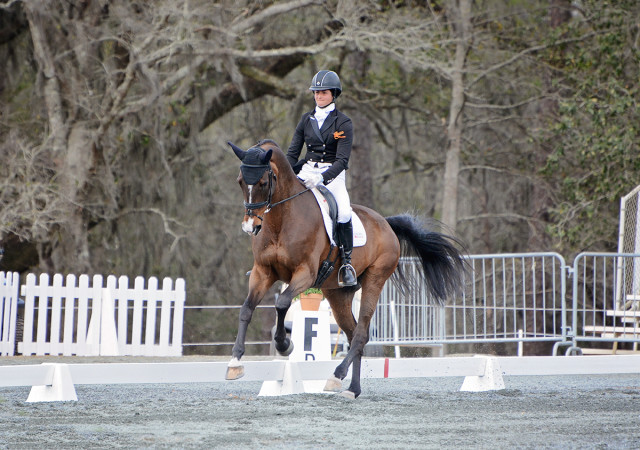 “It was about the best he’s gone; he’s getting better and better,” Phillip said. “Timing his warm up is pretty crucial because if you do too much then he drops behind your leg, and if you don’t do enough then he’s not quite through enough.”

Jack, an 11-year-old Irish Sport Horse gelding owned by Tom Tierney and Annie Jones, has been in training with Silva Martin for the last few weeks. “She’s done a great job with him,” Phillip said, joking: “I think that’s the reason Boyd does so well!” As for how Jack has upped his dressage game with Silva’s help: “He’s doing the movements a fair bit easier. He’s generally thinking a bit more forward and supple.”

It’s a special weekend for Jennie Brannigan. Not only is she sitting in third place in the CIC3* with Catalina, but her owner and former rider, Candace Kircher, drove all the way out from Texas with her family to watch them compete this weekend. Candace and Catalina won the CIC* at Red Hills in 2011, and Jennie said that they’ve always said it’s the mare’s favorite event. 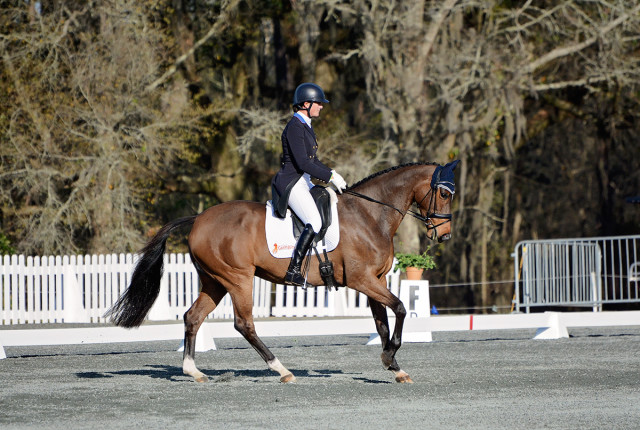 “I wasn’t exactly expecting to be sitting here, but I think in this company to have such a green horse step up to the plate is really exciting. My whole outlook in going into the ring is to relax. I’ve changed a bit with her recently. I just put her into a rubber snaffle, and she’s a lot steadier in the contact,” Jennie said.

“She’s a beautiful horse, but she is genuinely very green with the movements still, so I felt like she was a lot steadier. She has a great mind, so that’s lovely. The changes (have come) in the last six months, so it’s still new and fresh, and I couldn’t have been happier.”

Candace, a mom to 1-year-old Kylie and a new baby on the way in just 10 weeks, passed the ride on the 13-year-old Oldenburg mare to Jennie last fall. Since then Tim and Nina Gardner have come on to join Candace as an owner, and Team Catalina is hoping she will contest her first CCI4* at Rolex next month. 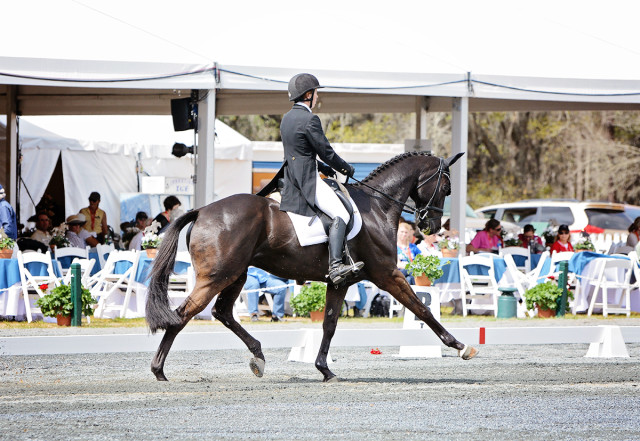 Selena O’Hanlon and Foxwood High, owned by John and Judy Rumble, delivered another impressive performance in the sandbox today to sit in fourth place on 44.7, and Ellie MacPhail and Sally Crane’s RF Eloquence scored 46.2 before the lunch break to finish the day in fifth place on 46.2. Click here to view the scores after dressage, and you can read more in the lunchtime report here.

Stay tuned for quotes from Clayton Fredericks, who is leading the CIC2* with FE Bowman on 41.4, plus more on the CIC*, led by Boyd Martin and Santos, and the Advanced division, led by Liz Halliday-Sharp and Fernhill By Night. We also have the full course preview to bring you, so keep it locked on EN.