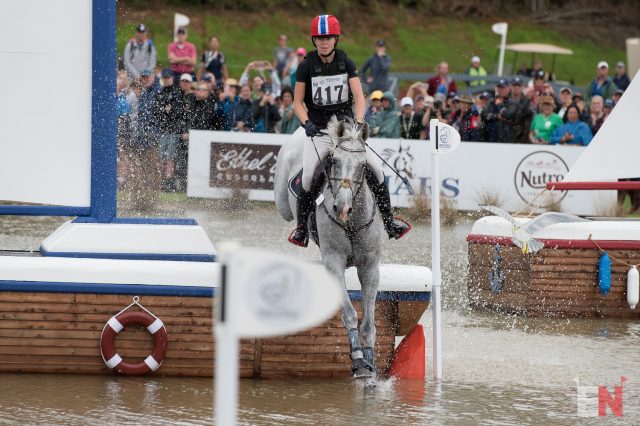 The ground jury stopped Heidi on course after fence 21 when Euforian, her 13-year-old Swedish Warmblood gelding she calls “Grålle,” was visibly lame.

“At the last water jump I had a suspicion that something was not right and considered stopping, but did not manage to do it before I was stopped shortly after,” Heidi said on her Facebook page.

“That I was stopped was absolutely right, and I would have done it myself. That the World Championships did not end as planned now means little. Grålle is the most important thing to me.”

Euforian was transported off course in the equine ambulance to the on-site veterinary treatment center at Tryon International Equestrian Center. He was diagnosed with a soft tissue injury and treated on-site.

Euforian boarded his flight home on Sept. 18 and is now back in Norway and continuing his recovery. The EN team sends continued speedy healing wishes to Euforian.

No other yellow cards or verbal warnings were issued during the eventing competition at WEG.

The FEI’s list of yellow cards and sanctions is updated weekly during the eventing season and can be viewed on the FEI’s website.