In his latest column for EN, William Micklem asks how the FEI should deal with exceptional weather conditions on cross country following the European Eventing Championships at Blair Castle, which saw the footing deteriorate as the day went on and more rain fell. Click here to read all of William's EN columns and here to visit his website. 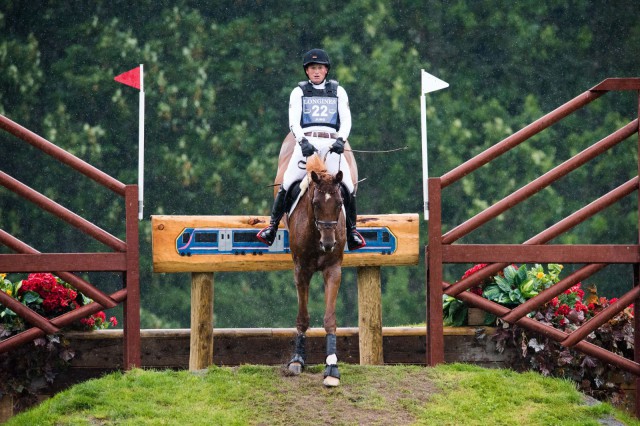 Michael Jung and fischerTakinou on cross country at Blair. Photo by Jon Stroud/FEI.

There is room for a debate in our sport regarding the level of severity of the cross country course in relation to changing ground conditions. Not to reduce the maximum allowed level of demands, but how to ensure the level envisaged by the course designer is largely level on the day of competition. The brilliant Ian Stark produced a magnificent championship course at last weekend’s European Championships, at Blair in Scotland, but the rain obviously meant that the level of severity was increased, particularly in the second half of the competition.

Is this just the nature of the sport, as British Chef d’Equipe Yogi Breisner suggests — “It is an outdoor sport after all” — or are there things we should do in response to exceptional rain to ensure the level of severity remains more consistent? A plan B, and even plan C, according to the changing conditions. Plan B for the ground jury at Blair meant hardcore being put down on some take offs and landings halfway through the competition and then subsequently the removal of one fence. Should changes have been made earlier, or for example should it be possible to increase the time allowed either before or during a competition?

Personally I believe it is vital that the cross country at each level of competition is not diluted, but this is not my point.  What I am talking about is making the competition level of severity more consistent with whatever star level it is supposed to be throughout the competition. The footing can never remain exactly the same, and this and changing light conditions, including the position of the sun, are all a normal part of the sport, but in exceptional circumstances should we do more to make things fair?

I was at the European Championships at Achelschwang in 1993 (long format days) when the rain made the cross country footing even worse than Blair. As Kristina Cook, the 2009 European Champion, confirmed: “Blair was reminiscent of my first Senior Championships, at Achelschwang in Germany in 1993, where it poured with rain on cross country day and the ground turned into a bog.” A section of the course was taken out but the end result was still not pretty, with I believe 12 horses either stopping or falling over the last two fences.

Then last year in France, at the World Equestrian Games in Normandy, the cross country course at Haras du Pin once again had a greatly increased severity because of the weather conditions. As in Achelschwang a section was taken out before the competition started, but when I walked the whole course at the end of the cross country it was obvious to see by the hoof prints, 15 centimeters into the holding ground, that the level of the cross country test was much greater than envisaged by course designer Pierre Michelet. As a result it was not a pretty sight once again, with many tired horses near the end of the track.

Some say this was because the horses were not fit enough or because they lacked Thoroughbred blood, or because the riders did not adjust to the conditions, but this does not alter the fact that without the rain the course would have been a significantly easier test.

Is what happened at Normandy and Blair what we want? Is the impression this gives to the viewing public acceptable? Is it fair to less experienced teams who are only just at the level of track that could be expected in normal conditions? And is it a level playing field for all competitors from the start to the end of the competition? Most agree that an all weather dressage arena is desirable in championship competitions, so that it is fairer to all competitors, so should this logic be applied to the cross country?

To be fair most top events now try to do this with a dedicated cross country track, extra drainage as required and generally improved footing. Certainly our top riders and trainers consistently seek good footing for their horses and most feel this creates better competitions and more attractive viewing. They are also not slow to withdraw their horses if the conditions do not suit, but this option is usually not possible in a championship team competition.

An all weather track would not be practical or desirable, although this already happens naturally at some locations, in California and France for example, but there are the other options of changing the required speed and/or distance that could be used more readily in exceptionally bad weather.

Because of the Atlanta Olympics the FEI rules already allow changes for specific high temperatures, so should it also be normal to allow changes according to the state of the footing? I am not talking about soft going or a little mud, but in the case of exceptional muddy conditions such as that experienced at Achelschwang, Normandy and Blair. Some will say I am just “too soft” but many also said the same thing about the introduction of short format and automatic elimination after a fall. So we need a debate and once again the FEI needs to see if a good idea can give way to a better idea.