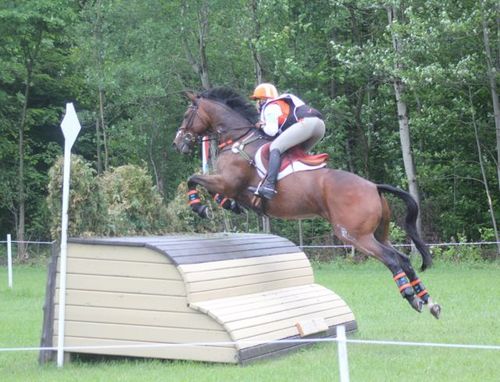 It’s a busy Tuesday morning for US high performance news.  The CliffsNotes version is that Obos O’Reilley, Rafferty’s Rules, and Last Call have all withdrawn from the Pan American Games short list and Titanium has withdrawn from Burghley.

The USEF has sent out a quick clarification of a couple of Pan American Games short list developments this morning including Last Call’s and Obos O’Reilly’s withdraws, although the press release did not mention Rafferty’s Rules withdrawing, which is a very recent decision.  Kevin Keane is the next alternate and will presumably replace Sharon on the short list.

As we noted on EN last Thursday, Alexandra Slusher and Last Call withdrew from the list and were replaced by alternates Shannon Lilley and Ballingowan Pizzaz.  Last Call has been given a Boekelo Grant, along with Boyd and Remington as well as Otis.  Last Call will therefore get to continue on track to a potential Olympic spot, which would not have been possible by going to the Pan American Games 2*.  We will hear more about additional Boekelo grants as the October CCI3* in Holland approaches.

Next, Will Coleman has withdrawn Obos O’Reilly from the short list.  They have been replaced by Alexandra Slusher and Pierre.  One of the big issues with riders scheduling for this autumn is that it is impossible to go to both the Fair Hill and the Pan Ams, which are just a week apart.  Riders with multiple horses who need to get an autumn 3* to have a shot at the Olympics are left with the choice of either not going to the Pan Ams or flying out to Galway a few weeks later.  Will withdrew Obos O’Reilly because he needed to take multiple horses to Fair Hill.  Losing Rafferty’s Rules, Obos O’Reilly, and Last Call from the Pan Am short list is a real shame because they were three of the most talented horses on the list.

The last note from the USEF is that Boyd Martin and Cold Harbor have been granted special permission to not compete at the Pan American Games mandatory outing and selection trials at Richland Park due to Boyd competing at Burghley.  Burghley is the weekend after Richland.  Michael Pollard is also entered at Burghley but did not ask for special permission not to compete at the selection trials.

Buck Davidson has withdrawn Titanium from Burghley so there will not be a Richland conflict with Buck and Absolute Liberty on the short list.  7 United States pair remain on the Burghley entry list.