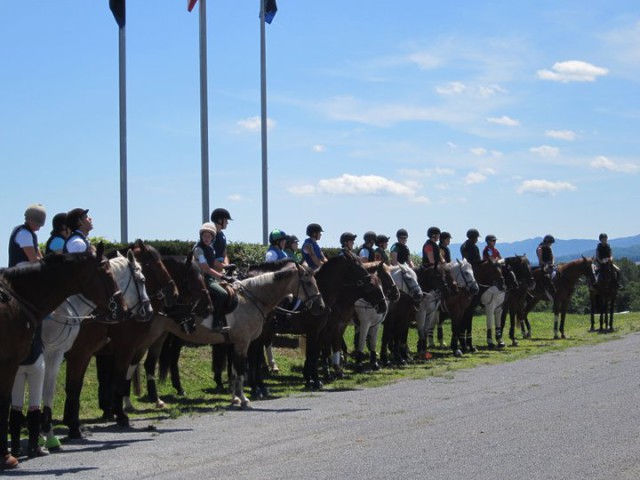 Eight years ago, I wasn’t nearly as concerned with the WEG team. Eight years ago, I was at my very first O’Connor Event Camp. I had so much to learn, and from the very start felt like I was learning as hard and fast as I could, and I was surrounded by eventers (many of whom I consider friends to this day) and it was wonderful, and then, at noon on the second day, my horse almost died.

We had finished the lessons and gathered in one large happy group outside the Virginia Horse Center’s covered arena. I sat on my good horse Gully on a loose rein, listening to David O’Connor recap the lesson, when suddenly Gully swayed, then staggered sideways. He felt like he was struggling not to collapse. “Gully?” I said, my voice high and frightened. “Gully?”

“Hop down.” Karen O’Connor had appeared at my knee. While I flung myself off, she cleared a space around us. Cathy Wieschhoff rushed forward and took off Gully’s saddle. He continued to stagger, muscles trembling, eyes glassy. I fought panic. “Gully!”

Different instructors moved the other campers away, called the vet, called the human EMTs on the ground. Gully staggered and gasped, then stood with his head hanging. None of us had seen anything like it. After several minutes, Cathy and I cautiously led him into the barn. An EMT showed up, and Karen insisted they listen to Gully’s heart — she thought he’d had a heart attack. But his heartbeat sounded normal, and his pulse was only slightly elevated.

And then he seemed fine. The rest of the campers went to lunch while I sat outside Gully’s stall, waiting for the vet. We’d taken his food away but he began to sniff around for hay; he peed, and it looked completely normal and light in color, which seemed to rule out tying up. The campers returned, tacked up and headed out for their afternoon lesson, and I was still waiting.

I don’t wait well. Eventually I stalked up to the only other person in the barn, Karen’s groom Max Cochoran, and growled, “Isn’t there anywhere I can get a Diet Coke around here?” All the vending machines sold Diet Pepsi.

Max said, “Cooler in the back of David’s truck.”

I went to the truck. The back had two coolers, one of Diet Coke, one of beer. I took a Diet Coke, popped it open, and drank a big swig. When I returned to the barn, Karen had come back. She gave my soda a side eye. I said, “If I have to wait much longer, I’m going to steal one of your beers.”

She nodded. We sat down on three chairs close together. I was still new enough that part of my brain was saying, “OMG! It’s Karen O’Connor! KAREN O’CONNOR is sitting right next to you!” (The other part was consumed with worry about my horse.) Karen, meanwhile, was staring at her cell phone as though she could make it ring by mental telepathy. This was still before texting was possible.

I stared at her staring at her phone, and realized she was waiting to see if she’d been named to the 2006 WEG team. Well, I thought, my life cannot possibly get anymore surreal than this. (I was wrong.) Eventually Karen sighed, snapped the phone back into her pocket and went off to teach.

The vet came. We went over every aspect of my horse and could not find a single thing wrong. I know that doesn’t sound like a horse that nearly died, but I also knew he nearly had. Eventually his blood work came back with elevated liver enzymes, which suggested that when I’d hand-grazed him that morning, he’d gotten a mouthful of some type of poisonous plant, but we never really knew for sure. He never showed the same symptoms again.

When the afternoon lesson was finished, Karen was the first person back to the barn. She came straight to Gully’s stall. “How is he?” she asked. “What did the vet say?” She listened while I told her everything we’d done and learned. “Let me know if he does anything else funny,” she said, before walking down to her own horses at the end of the barn.

Then Max came in. “Hey, Kim,” she whispered, “She got the call a few minutes ago. She made it.”

I looked down the long barn. Karen was standing outside Woody’s stall, stroking his nose and talking to him.

I’ve never forgotten that she asked about Gully first.