EN guest writer Laine Ashker finished 29th with Anthony Patch in her ninth career start at this year's Rolex Kentucky Three-Day Event. She ponders what it means to officially be a "Rolex veteran" in her latest blog ... and gives a sneak peek at where she and Al might be headed next. 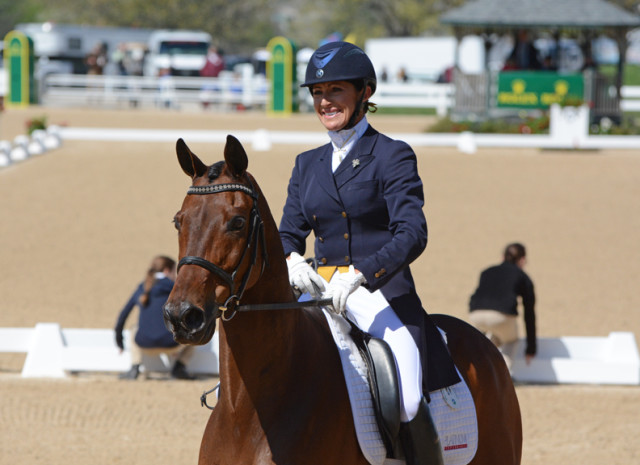 “So how does it feel to be a Rolex veteran?” I pondered this question long after my interview with a morning radio show as I made my way up highway 75 leading a caravan of other Kentucky hopefuls and fellow Cali girls Allie Knowles and Jennie Brannigan. A Rolex veteran? I guess the radio show is right. At 31 years old, I have had the honor of riding four legendary horses in nine starts of our nation’s most prestigious equestrian event starting 10 ten years ago. Gulp, now I feel old!

I think the reason why this question had me thinking hours later even after it went answered was because up until then, I never viewed myself as being old, ahem EXPERIENCED, enough to be called a “veteran.” But then again, in a sport that is halfway dependent upon the side of the stall your horse woke up on, can you chalk success up to experience alone, or does there also need to be a bit of luck added to that statement? I think we can all argue both sides of the story.

This year was Anthony Patch’s fourth Rolex start since he began his four-star career in 2010, placing 8th nationally and 14th internationally.  Ever since then I have been vehemently striving to improve on that placing, but sadly to no avail. This year, unfortunately, paralleled that of the previous ones with many “almost had it” moments.

I am proud to report however that even after attempting Rolex eight times prior to this year, I was able to experience my very first Rolex press conference following my personal best dressage test which landed my dainty little OTTB and I in second place behind the reigning world champion Michael Jung and the mare with whom he would end up winning the coveted watch come Sunday afternoon.

As I sat in the media room decorated with Rolex logos, yellow flowers and Dasani waters galore, I reminded myself to take in each and every moment as some people, no matter how many times they attempt a four-star, never get to experience a formal press conference. Needless to say, as I exited the elevator from the press conference and made my way back to the barns to check up on Al, I was walking a couple feet above ground. What a moment to behold!

And what a difference does 24 hours make! Once the sun was overtaken by looming clouds and gusty winds, which finally gave way to torrential downpours on Saturday, the casual smiles and echoing laughter that once resonated throughout the barns were replaced with somber glares and quiet chatter by the riders and their support groups. As Al and I made our way to warm up alongside my loyal mother, we were greeted with well-wishes and cheers from the crowds screaming, “Go Al go!” — another unforgettable Rolex moment of mine.

Nevertheless, the rain kept pounding away. Once Colleen Rutledge came back with news to the rest of us that the course was riding rough due to footing but was still very doable, you could see every rider making a mental note of what needed to be done to get his or her horse safely through the finish flags of the taxing course that lay ahead.

Always one to stick to a game plan, this unnerved me as quite honestly I had never ridden a four-star in conditions as wet and as sloppy as what I was about to embark upon. The closest I have been to riding in weather like this was Fair Hill CCI3* in 2009, BUT over half of the course was taken out due to poor footing and weather conditions. This would be a prime example where EXPERIENCE becomes a major advantage!

As Al and I set out on the course, I thought to myself that I had better take it easy in the beginning, as there were a lot more combinations and less gallop room on the latter half of the course, and I was worried about exhausting him in the beginning. What I didn’t take into account, however, was that although it’s one thing to ride less aggressively in between the fences, it is quite another to ride tepidly AT the fences.

The truth about my ride before the coffin was that I was not there for my horse when he needed me. Sure I was trying to slowly increase on the gas pedal as the course went on, but I still needed to step on the gas at the jumps, especially in heavy footing on a careful jumping horse. It took me until fence 8 and ultimately 9b at the brush following the coffin for me to have a stop and finally re-evaluate my prior tactics and revert back to my more aggressive, quicker cross country riding style.

As I galloped up the long hill following the coffin, my heart felt as heavy as the footing. I contemplated just stopping and walking home to save Al for another day.

Then I thought about Badminton in 2014, the World Equestrian Games in 2014, Fair Hill in 2009 and gave myself a kick in the pants. If I want to be a world champion, I have to be able to ride in ANY weather! A line from my favorite book Mind Gym quickly shot through my brain on approach to fence 10: “You have to learn to be comfortable in the uncomfortable.” With that in my mind, off Al and I went. #boom

I can wholeheartedly say that I finished that cross country course with a better horse, and that day I became an even better rider for finishing stronger than what we had started. After the stop, I learned how to ride in deep footing, hunt down to galloping fences with eyes half way open due to pelting rain and how to GET THE JOB DONE despite not feeling as if you and your horse are on your game.

And that’s just the way the cookie crumbles, folks. Not every Olympics or World Games is going to be a perfectly sunny day with temps in the mid to upper 60s with little to no humidity in almost perfect footing. I know that when the time comes and when the odds are stacked against me, I will now be able to take the skills I gained from my Rolex 2015 cross country ride to get the damn job done!

Was I demoralized that I lost my chance of Rolex grandeur with my one costly mistake? Yes. Do I believe that I was (and still am) sitting on the Rolex winner? Oh heck yes. Did I walk away from that cross country course with my tail in between my legs? You better think again. NOW I can officially call myself a Rolex veteran.

It just wouldn’t be Rolex without achieving your personal bests and your personal worsts. We all know I’ve had my fair share of both. Show jumping on Sunday was nothing short of a personal best as Al entered the ring poised and eager to jump a beautiful clear round, which happened to be the first jump fault free round of the day (I tend to conveniently omit that one time fault).

Yet another notch is in my Rolex belt, or maybe two. Maybe even a third notch being that I finished with a very sound and very happy 16-year-old partner I’ve been riding for 13 years. And who’s to say this is Al’s last year at the top level? Al certainly isn’t. I still think I am sitting on one of the world’s best horses, and I intend to prove that until he deems otherwise.

So what’s next for the little bay gelding and myself, you ask? These Rolex vets have a hankering to hop a flight across the pond … and who knows? I may get to see Ben Hobday’s selfie skills in action come late summer/early fall … perhaps a challenge is in order?  Until then folks, chins up, purse your lips and grab your closest selfie stick. I hear they take them well at Burghley …