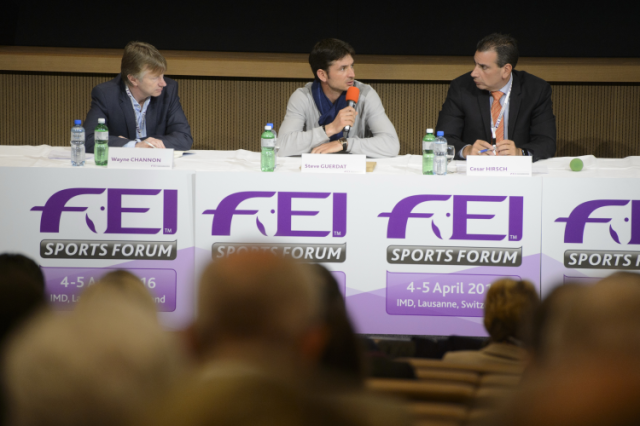 Olympic champion Steve Guerdat, center, spoke on the panel during session three of the FEI Officials’ appointment and remuneration at the FEI Sports Forum in Lausanne, with Wayne Channon and fellow panelist Cesar Hirsch. Photo by FEI/Richard Juilliart.

The FEI Sports Forum is well underway in Lausanne, Switzerland, where a record number of 320 delegates have gathered to discuss major changes that are on the table in order to align international equestrian sport with the Olympic 2020 Agenda.

“Being open and transparent is vital to us as we are discussing matters which have the intention to, and most probably will, affect the future of our sport,” FEI President Ingmar De Vos said. “By coming together to share experiences and to discuss the future, we are showing our strength and unity as a sport and our willingness to lead and not be led.”

Yesterday’s opening day focused primarily on FEI officials, specifically their career paths, financial compensation and continuing education, with age limits and performance standards also emerging as a major theme. Following a lengthy debate on these topics, a proposal will go forward to the FEI to create a special task force for officials.

“The officials are a group of people that play an important role in our sport and without whom our sport would not be possible,” Ingmar said. “Our officials are in the frontline when it comes to preserving integrity and ensuring that a level playing field is maintained.”

Age limits: FEI rules currently require that all officials retire at the age of 70, and Vicki Glynn, CEO of Equestrian Sports New Zealand, supported the removal of the age limit.

“Legally this may be seen as age discrimination. The age limit must be removed,” she said. “We are one of only two international sporting federations that retain age limits for officials. We should put a more effective evaluation process in place and like many countries do when renewing drivers’ licenses, you need to have an eye sight test, medical test.”

Continuing education: Delegates agreed that educational support from the FEI is critical to increase the level of understanding amongst officials, as well as ensure the correct application of FEI rules. There was also a general consensus that further training and standardized education materials are key to the development of equestrian sports.

“People need to learn to follow procedures, judges need to learn that, but one thing we cannot miss is the horsemanship these people should have,” Steve Guerdat, 2012 London Olympic show jumping gold medalist, said. “Yes, we need rules; the rules are black and white, but we must not forget we have a horse in our sport — a living animal — and the officials must understand the importance of horsemanship.”

Financial compensation: Delegates spoke out addressing the disparity in payment for officials in different countries around the world. For example FEI judges are typically paid about $136 per day in Europe. In the U.S., a delegate from the National Reining Horse Association said judges receive $500 per day.

“I really don’t believe that someone who (is an official) on a voluntary basis is more or less professional,” panelist Rocio Echeverri. “As an official, I’m 100 percent committed whether I get paid or not. Getting more money doesn’t make us better officials. It’s about ethics. Payment does not make a better official in my opinion.”

There was also concern about how to secure top officials for developing nations and the non-Olympic disciplines. “Don’t forget the smaller disciplines that are less professionalized and with less prize money,” Maarten van der Heijden said. “These athletes deserve well educated officials, too.”

The second day of the FEI Sports Forum is being streamed live now on FEI TV at this link, and the proposed rule changes to eventing are currently being discussed. Stay tuned to EN for a full summary.