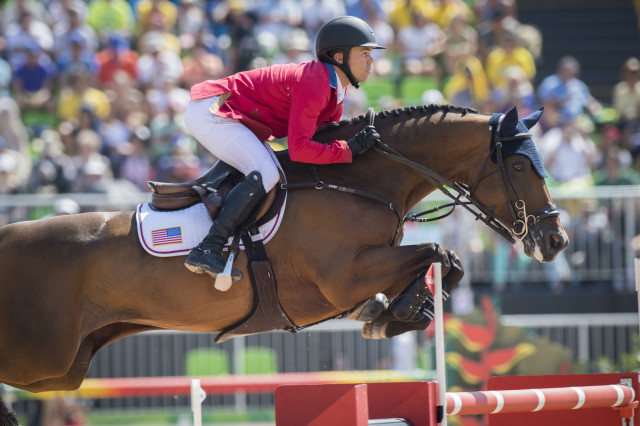 A beautiful day in Rio saw a dramatic and grueling second qualifying round for the showjumpers — catch up on the day’s headlines and news here at our daily Olympic happy hour!

Today’s show jumping saw the true cream rise to the top; 11 riders have now gone clear in both individual qualifying rounds to be in prime standing for individual medal contention. Also noteworthy, more riders have been eliminated for breaking the “blood rule” regarding spur and whip overuse.

How do the team standings shape up now going into tomorrow’s medal round? 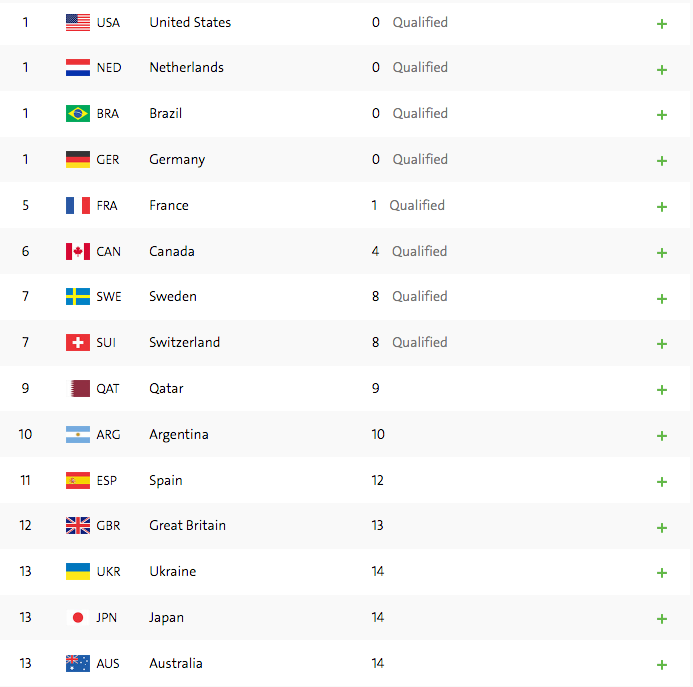 Here are the so-called “elite eleven” who have managed clear rounds in both qualifiers, including the USA’s Kent Farrington: 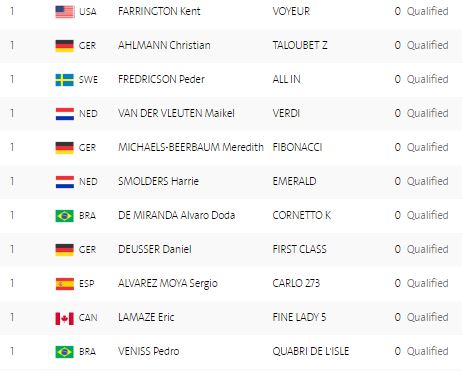 Did you miss all the action this morning and want to catch every detail? Our sister site Jumper Nation provided a live feed during today’s competition, so for those of you unable to access the streaming replay, you can catch details on each and every round. Results are presented in the order of go: start at the top and read your way down! [Jumper Nation – Rio Olympics Live Feed]

21 riders went clear today, but the course was anything but an easy stroll. Three American riders achieved clear rounds (Farrington, Lucy Davis and McLain Ward) but Beezie Madden had uncharacteristic trouble and was the drop score. The Brazilian team, coached by George Morris, kept the crowd electrified with each performance and also achieved three clears to advance in good position for tomorrow’s second team round. World-class threats Germany and Netherlands are also poised to make moves on the podium. [Rio Olympics Round Two: Team USA Triumphant, Brazil Goes Wild As Top Qualifiers For Final]

One of the biggest upsets in the team medal chase are the defending gold medalists Great Britain now totally out of the competition. Individuals Ben Maher, Michael Whitaker and Nick Skelton are all individually qualified but the number of faults today took Britain right out of team medal contention. Even with Great Britain’s appeal to the call that Skelton’s horse had a foot in the water (the appeal was rejected) the team is still out of the competition. [No team showjumping medal for Britain: defending champions out of the Rio Olympics]

Two riders were disqualified today for overuse of spurs when their mounts presented with traces of blood. Brazil’s Stephan de Freitas Barcha and Ukraine’s Cassio Rivetti were the riders in question when blood was found on Landpeter Do Feroleto and Fine Fleur du Marais respectively. Neither rider is eligible to jump for their team again during this competition. Brazil has lodged a protest over Stephan de Freitas Barcha’s disqualification. [Further disqualifications under blood rules and an official protest in Rio showjumping]

Get to know Australian Scott Keach, who last competed at the Olympics 28 years ago — as an eventer. Not only has Keach set a record for the longest gap between Olympic appearances for any Australian athlete, he actually didn’t even ride at all for ten of those years. Opportunity came knocking for Keach to travel to the United States and get into showjumping, and luckily for all of us, he took it. [Tales from Rio: ‘My last Olympics was 28 years ago — in a different discipline’]

Keep it here on Horse Nation for continued coverage of the Olympic games, and don’t miss our sister site Jumper Nation for live coverage, in-depth analysis and more!