It was announced in June that America’s own Marilyn Payne was selected as President of the Ground Jury for the 2016 Olympic Games in Rio de Janeiro. We are grateful to have had the opportunity catch up with Marilyn and learn more about her career as an official and life as a horsewoman. 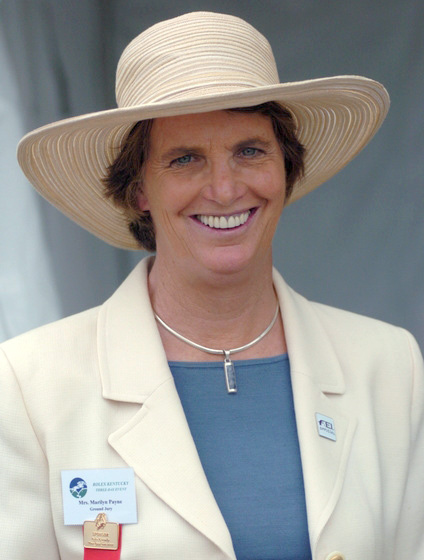 Marilyn Payne is a well-known and respected eventing and dressage judge. Photo courtesy of Michelle Dunn.

Marilyn Payne has officiated at some of the world’s biggest events, including judging at the 2008 Beijing Olympics and serving as President of the Ground Jury at the 2010 World Equestrian Games in Kentucky. Yet, she was surprised when she was selected as President of the Ground Jury for the 2016 Rio Olympics. “I was honored they would ask me,” she said.

Marilyn’s career as an official has flourished through her love of horses and education. She is now a highly sought after clinician, sits on multiple equestrian committees and is a familiar face at major events around the country as both a Technical Delegate and Judge.

“I just really enjoy watching good horses and riders and I love helping people,” Marilyn said. “I enjoy giving comments that hopefully they can use to keep progressing in their training.”

Marilyn got her start as an official in the ‘70s. She was already an eventing Technical Delegate when the organization now known as the ESDCTA held a dressage judges training program near her home. She was qualified, having ridden at Second Level, so she participated and became a “r” Dressage Judge.

She started judging at both dressage shows and events while she continued to also compete in both. She evented a Thoroughbred named Bold Chance who did not cherish his job, so she focused on dressage and brought him up to the Grand Prix level, achieving the scores needed to pursue her “S” Dressage Judge license.

Marilyn is now a 4* FEI Eventing Judge, “R” Eventing Technical Delegate and USEF “S” Dressage judge. For decades, she has traveled the world to officiate both dressage and eventing competitions, creating lasting friendships and compiling unforgettable experiences along the way.

“One of the best perks of the job is that you always meet fabulous people. Wherever I judge there are always some familiar faces, and at each competition you meet new ones who become part of your family. As you travel around you may see someone only once a year, but it’s like old home week!” Marilyn said.

“No matter where I travel, eventers are all the same. They’re all the kind of people that I would like to be friends with. We all have similar personalities; we love horses, the outdoors and a good time.

“People ask ‘how can you judge and sit there for eight hours?’ But judging isn’t boring. You’re constantly on, watching and commenting, and no test is the same. How can it not be enjoyable watching talented horses and riders and witness the amazing partnership between them? It’s like a vacation; yes, you work and have responsibility, but it’s fun and you get to watch horses and riders having fun.”

“As the years passed, I have had more opportunities to travel. As a dressage judge I travel all over the United States, and as an event judge I have been able to travel worldwide. Judging eventing is fabulous because you get to see the most beautiful places in the world – not only beautiful landscape but also lovely mansions and castles.”

To date, the eventing competition in Hong Kong for the 2008 Olympics is the biggest event Marilyn has ever judged and one of the most fascinating travel destinations. Over the course of three weeks, she and the other officials got to tour the area and experience a completely new culture.

“People ask if I ever get tired of traveling. Not yet! All the venues are gorgeous! They are all totally unique in settings, cultures and surrounding areas. Every one has something unique about it.”

Marilyn’s goal is to officiate at every CCI4* event in the world, and Luhmühlen is the only one left on the list. So far, however, she can’t seem to pick a favorite.

“The organizers are always so gracious. They make you feel at home and help you explore the area. After officiating at the Adelaide CCI4* we were put up in a gorgeous hotel right on the beach. We got a private plane ride over to Kangaroo Island and a private Jeep tour. We saw koalas and kangaroos in their natural habitat. What a special treat!” 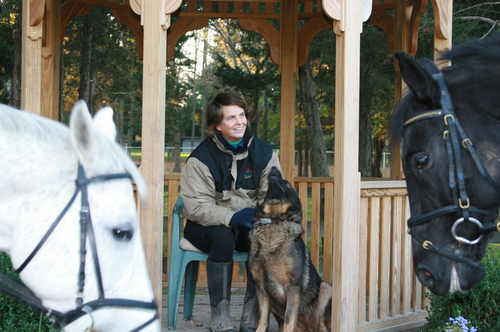 Marilyn passes on her love for learning to her students. Photo courtesy of Marilyn Payne.

The Most Memorable Test

For a person with so much experience officiating, surely there is one extraordinary test that Marilyn will never forget? Indeed, she had no trouble recalling the most memorable test she’s seen.

“The first time I was asked to judge Burghley, in the trot up we’re watching this small, short-strided chestnut mare trot up and I’m thinking ‘how can that be a four-star horse?'”

In disbelief, she looked forward to watching the horse compete. The next day during dressage, Marilyn was nervous because it was her first time judging a big competition abroad. A chestnut came in the ring and Marilyn was giving it high scores from the start.

“Seven, 7, 8, 9. Holy mackerel! This horse had so much presence and cadence. It was just phenomenal. I was throwing out scores thinking ‘I hope the other judges are with me!’” Marilyn recalled.

“The crowd there is very knowledgeable and they could see the scoreboard, which we couldn’t see. I could hear excitement in the air as the test went on, and when when we gave the collectives the crowd went wild.”

Marilyn, who was the side judge, awarded her first 10 for the pair’s final halt and salute. To Marilyn’s relief, the other judges agreed on the quality of the performance from the little chestnut mare.

“I had no idea that was the same chestnut from the day before,” Marilyn admitted. It was Lucinda Fredericks with her mare Headley Britannia. They ended up winning the whole event at Burghley that weekend and went on to win Badminton the following year and Rolex two years after that. “You just never know!”

All in the Family

Despite her illustrious career as an official, Marilyn might be most famous for being the mom of upper level event riders Doug Payne and recently married Holly Payne Caravella, and there are certain weekends every year that she keeps open so she can support them at major competitions, like Rolex and Fair Hill. “If they’re doing a top competition, I want to be there.”

The conflict of interest does present a small challenge if Doug or Holly are planning to compete at the same event where Marilyn is officiating. At a national competition, if Marilyn is the President of the Ground Jury, they can ride but she cannot judge their division or make any decision in regards to them. However, she can never officiate in an FEI division where they wish to ride.

So, she always checks with them and what their season plans are before setting her own schedule. For this reason, she has not judged at Fair Hill for several years and turned down an invitation to judge Rolex in 2016, since they both are planning to compete there.

“Judging at Rolex is amazing, but there is nothing like watching Doug and Holly compete there!”

Back at Applewood Farm in Califon, New Jersey, Marilyn’s husband, Dick, holds down the fort when she is away. He’s not a horse person, Marilyn said, but he does ride once a year at the Christmas gymkhana and usually beats them all, including Doug and Holly.

Dick understands the time and commitment required in a sport like equestrian. He has a vintage Corvette racecar that he takes out a few times a year. His colors are red and yellow, and the car, toolbox, chairs, uniforms, everything is color coordinated, just like in eventing. The friendship and camaraderie between drivers is similar to that of eventers, too, Marilyn said.

Dick went to competitions with Marilyn when they were dating and first married. Today, he goes to the three-star and four-star events to support Doug and Holly. Throughout the year, his presence at home on the farm remains invaluable. “I wouldn’t be where I am without him.” 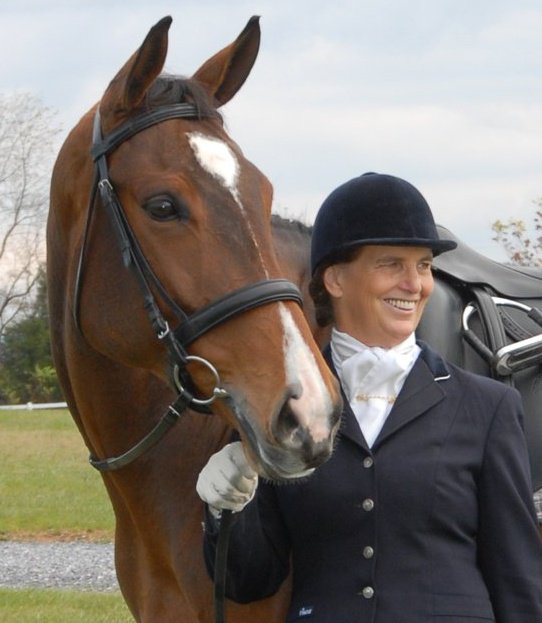 When Doug and Holly were born, Marilyn quit her “real job” to stay home with them. She started breeding sport horses, just one foal a year at the beginning. She loved watching them grow and develop.

When the USEA’s Young Event Horse program was started, she was asked to be on the committee. Amidst complaints about the judging at YEH events, Marilyn decided to put her experience training judges to good use and helped develop a judges training program for YEH. “We’re not going to have a successful program if no one has confidence in the judging.”

It’s come a long way, Marilyn said. “We are trying to encourage more breeding of event horses here in the U.S. We now have the Turner-Holekamp Grant which offers an incentive for American breeders, and we are working on other plans to encourage event horse breeding. The breeders must love eventing themselves since at this point it is not a big money maker. Owners must love the sport and want to be a part of developing U.S. horses to be a part of our teams.”

Marilyn would love to see less importing and more breeding here in America. “I love teaching and watching horses develop, so it’s fun whether they’re mine or not. I love watching horses progress from yearlings through the Future Event Horse competitions and on to YEH, culminating in the Championships.”

A goal of the YEH program is to identify future team horses, and that milestone was reached at this year’s Pan American Games in Toronto, where two of USA’s team gold medal horses were YEH graduates. Meadowbrook’s Scarlett, ridden by Lauren Kieffer, graduated the program just three years ago while Pancho Villa, ridden by Boyd Martin, was a participant in the early years of the program. 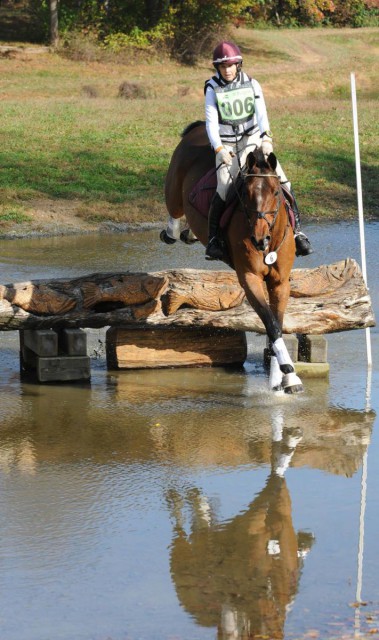 When a Judge Competes

Now and then Marilyn keeps a weekend free so that she can compete her own horses. She has some young horses coming along that will start showing dressage soon. In eventing, she has been successful at Training level with her mare Safe Harbor, for whom the USEA’s Safe Harbor Award is named, given annually to a horse at the YEH championships that the judges feel are the most amateur friendly.

“One benefit of judging is it makes you a better rider. You also know exactly what the judges are looking for so you become a better showman and competitor.

“Obtaining a judge’s license takes years of training, listening, watching and learning the basics. It instills in you correct riding and correct training. It keeps making you a better rider as you become a better judge. I’m a person who loves the process, always wanting to learn and confirm my own training program.”

Marilyn upholds her dedication to education through activities offered at Applewood Farm, like frequent clinics and schooling shows for eventing and dressage riders and the popular FEH, YEH and Modified Eventing competition in August. On the occasions she is home, Marilyn’s schedule is typically filled with lessons.

Through officiating, teaching, training and participating in educational opportunities on and off the farm, Marilyn is able to share her passion for learning while enjoying the wonderful horse world with her friends, old and new.

Marilyn will be heading to the Olympic test event in Rio next week, and she promises to send us pictures and tell us what the venue is like. We plan to hold her to it!

Visit Marilyn’s website to learn more about her and upcoming activities at Applewood farm.