EN isn’t just your leading source for eventing news, results and commentary; it’s a community where fans of this crazy sport come together to share their war stories. We love hearing from readers and, in turn, sharing your thoughts with the world. All reader submissions are eligible for the Omega Alpha Reader Submission of the Month in which they are published. All winners will receive an Omega Alpha supplement of their choosing. Have something to share with EN? Send it to us at [email protected]! 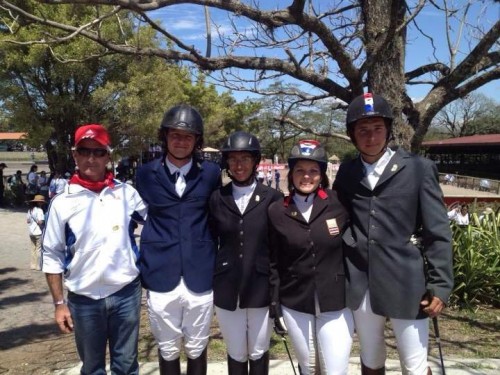 We’re pleased to announce that Leonor Munoz’s reader submission, “Riding My First CCI* Championship,” is the Omega Alpha Reader Submission of the Month for March. Leonor rode on the Costa Rican team at the Central American Championship Games last month. From Leonor: “What seemed impossible became reality, and next to to my team members, Andrea Sanchez, Gregorio Beeche and Victor Wolf, we came out victorious with a team bronze medal around our necks. And, as Ian (Roberts) said just before heading out to the airport, me winning the silver individual medal just made it that much sweeter.”

Leonor will receive a free supply of an Omega Alpha supplement of her choice for sharing her story about competing in the Central American Championship Games in Costa Rica. Want to win an Omega Alpha supplement? Send in your story, clinic report, video or other article to [email protected] If it’s published this month, it will be eligible for April’s giveaway. *Month to be determined by date of publishing, not date of submission. Many thanks to Leonor for writing and to Omega Alpha for supporting Eventing Nation. Go eventing!
–
Here’s a look at other reader submissions we loved from last month:
–
Biggest Achievement: “Competing at the Maccabiah Games” by Rebecca Brown

Texas eventer Rebecca Brown was selected to compete on the U.S. dressage team at the 2013 Maccabiah Games in Tel Aviv, Israel, this summer. The Maccabiah Games — think Jewish Olympics — are the third largest international sporting competition in the world. From Rebecca: “Because this is the first year that this competition is being held and many details are up in the air, most of the U.S. team members have decided to borrow horses. … I have no idea if I’m going to be given a camel or a well-trained warmblood, but I do know that I’m glad my Texas residency will have me prepared for the Israeli July heat.”

Karen O’Connor taught her first clinic since her rotational fall at Morven Park at Holly Hill Farm in Benton, La., last month. According to Brooke Schafer, Karen was just as thrilled to be there as Holly Hill was to have her. From Brooke:  “Karen set up exercises that would help horse and rider focus on distances and riding straight. She emphasized the concept of ‘a pair of hands for one mouth,’ saying that the horse only has one mouth and the rider needs to ride with their hands together, not each hand separately. She also said it was important that as riders we learn to ‘do more and have it look like less,’ so that we were more in tune with our horse’s every move.”

Anneke Davidson shows you’re never too young to get bit by the eventing bug. She events Lucy, her Connemara Pony, at the tadpole level. From Anneke: “Hi! I am Anneke Davidson and I am 9 years old and I love eventing! My mom has let me do one tadpole on my Connemara pony, Lucy. Unfortunately, I was eliminated for letting Lucy jump out of the arena, but the show allowed me to ride stadium and cross country, and I went clean in both. My mom is currently part leasing a Quarter Horse for me to ride named Nuk, since my pony can be a little too much of a go-go pony.”

The UC Davis Event Team is collaborating with the Clemson Event team to establish the Intercollegiate Eventing League, a national organization for collegiate eventers. From Amelia: “The goal of the IEL is to unite college eventers in organized competition. It is about community, competition, and fun. Eventual ambitions include scholarship opportunities, a national competition, etc. For now, look forward to more news on this fledging organization, and expect us at the Twin Rivers Spring 3-Day & H.T., as well as the Spring Event at Woodside.”