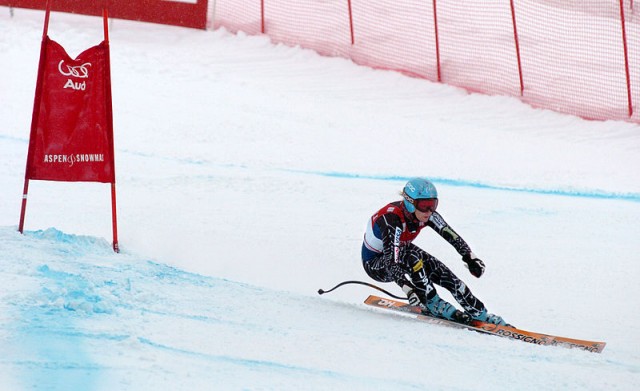 Like many Americans, I am obsessed with the Winter Olympics. I actually prefer them to the summer version. This year, something has become increasingly clear to me, both as an observer as well as a former mental health professional. Letting it mentally all hang out is even more essential for winning at the elite level of sport than pure athletic talent, preparation and training.

In downhill, the talking heads frequently repeat the phrase: “He/she has to let his/her skis run.” At first, this really didn’t make a hell of a lot of sense to my literal way of thinking. Skis are inanimate hunks of wood never destined to run a 5K on their own, right? I started paying closer attention as the athletes went hurtling down the icy slopes at terrifying speeds and had an AHA moment. The oft-repeated phrase listed above was actually a cutesy way of saying that winning skiers have the ability to stop trying to control every inch of their descent. Instead, they train themselves to pay maximum attention to where the skis are going and how they intend to get there rather than fighting them into a preconceived mold.

“Feeling over thinking” takes an almost super human ability to literally throw caution to the wind and just let it happen. This is pretty much against “normal” human nature that reacts to what is perceived as danger by striving to control the situation. Julia Mancuso, downhill skier, says she “skis with her heart.” Charlie White, half of the 2014 gold medal ice dancing team with Meryl Davis, talks about the movement they are doing “taking on a life of its own.” Jason Brown, a first time Olympic skater, says it all with his smile and his totally infectious enjoyment of living the moment.

Expanding upon this, it is interesting to follow some of the repeat performers at the Games who are there this year seeking a return to the tallest step on the podium. Shaun White, Bode Miller and Shani Davis come to mind. Each was a superstar in his earlier Olympic outings. Shaun and Bode were both pretty loose and unconventional in their approaches. They manifested a sense of joy in their performances.

Fast forward to this year’s Games. Shaun cut his hair and stopped being The Flying Tomato. In fact, he requested not to be called that anymore. It seemed he began taking himself very seriously. Now I’ve never done any extreme sport (except eventing if you want to call it that!), but I’m absolutely positive that you can’t be rigid and controlling while flying through the air upside down. Success at the half pipe, and all the new derivations of it, really is a matter of letting your board run and going along for the ride. A fearsome example of that is Sage Kotsenburg, a first-timer who became this year’s flying sensation. He admitted that he hadn’t been in a gym since January, and he secured his gold medal on opening day with a trick he had never performed before. Unconventional? Yes. Experiencing joy in doing his sport? Definitely. I’ll be curious to see if fame spoils him like it seems to have Shaun. I hope not!

Bode has been in the Olympic spotlight for 16 years. When he started out, he was definitely in the “bad boy” camp with his erratic and unconventional lifestyle and training habits along with his death-defying racing style. He lived his life and his skiing on the edge complete with a fair number of contentious incidents. This year, he seemed to be a changed man. He married a “soulmate” and grew up. His brother died, a tragedy that weighed heavily on him. For his first few races, he was a non-entity and looked absolutely miserable. In the Super G, the old Bode shone through, and it paid off with a bronze earned after a breathtaking run. Though marred by an especially tasteless NBC post-run interview, I was thrilled to see the effort he made to stop intellectualizing and instead concentrate on the feedback he was receiving from his skis. In short, he just did it (apologies to Nike).

Speed skater Shani Davis was another tremendous disappointment early in the Games. (Disclaimer: This is being written in the middle of Olympic week, so I don’t know if he managed to get it together.) I couldn’t help but be reminded of  the rise and fall of Michael Phelps. They both burst on the scene of their respective sports and set records by skating and swimming with blazing speed. This year in Sochi, Shani seemed to have lost the ol’ fire in his belly. He (and the rest of the U. S. skaters) spent quite some time and energy blaming their new high tech suits for their failure, yet when they were allowed to switch back to their old suits, they were still well out of the medals. Instead of that fabulous long-swooping skate that Shani was famous for, he looked choppy and tense. Too much thinking and not enough feeling?

For those of you who have managed to bear with me this far, I’m sure you are asking “WTF does the Olympic winter sports have to do with the sport of eventing, and why is this crap being written for an equestrian blog?” Valid questions, but honestly, there is a point there somewhere!

I was recently watching film clips of the Montreal Olympics, the ‘78 World Championships in Lexington, and a hunter round put down by Bernie Traurig some 20 years ago. True, by current standards, the eventing courses looked somewhat crude and relatively simplistic even though they were considered state of the art in their time. What tremendously impressed me, though, was the riding styles in all three tapes. The good ones were forward, balanced and harmonious. Riders were not chugging down to the fences battling to find the perfect spot. Instead, they seemed to be just listening to their horses and “doing it.”

When did our riding philosophy change? When did the intellectual approach start to supersede the feeling one and why? True, courses have become a lot more technical — but did this happen because of a change in philosophy, or did the change happen because of a change in the courses? Granted, instead of inanimate hunks of wood, we are partnering with living beings — beings as capable as we are of having bad days, nerves, fear, boredom, fatigue, etc. But have we stopped paying attention to that very fact, and are we instead thinking too much about the end by trying to dominate the journey instead of enjoying it?

I love watching the Brits ride. I’m sure William Fox-Pitt thinks a bit about spots and distances, things we seem to obsess about, but I think he mostly eases into the proper gear and pretty much lets the horse he is riding figure it out. Lucinda Green in her clinics never sets schooling questions at any preconceived or traditional distances. She wants the rider to keep coming and let the horse learn how to solve the problems. This is a much more feeling approach.

I started showing in the hunter ring in the days in which a really brilliant galloping horse with a great bascule was highly sought after. Today, it’s gone so far the other way that it would appear that the number of steps a horse takes in between fences is much more important than the actual quality of the fences. It’s become so mechanical that the horse might as well be an inanimate hunk of wood!

I fear for our wonderful sport when I see Novice riders grimly counting strides on course walks and struggling to find distances on cross country. What happened to letting it flow after finding the proper gear? It’s a style I hope we can get back to at all levels. It worked for a lot of years, and hopefully it will have a chance to work again!.