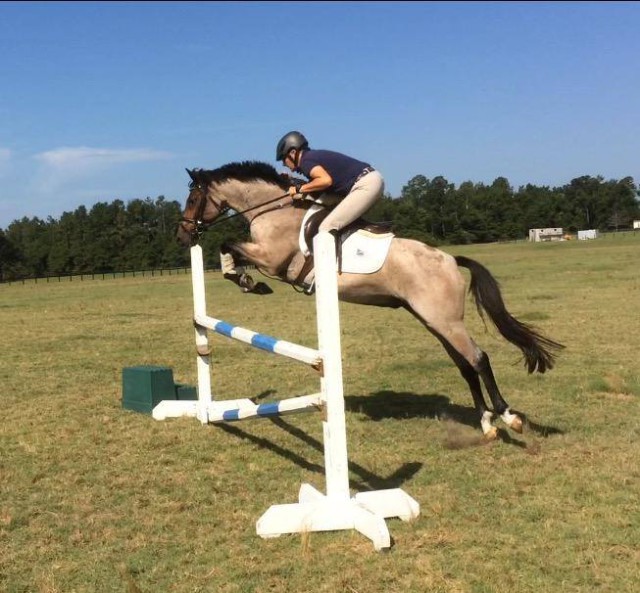 Elly Schobel and Gee
“AECs, here we come.” Those are words I never thought I would utter – seriously !  As a German born-and-trained dressage rider, I have spent my life training, coaching and competing through Grand Prix, not a jump — never mind a solid fence — in sight. However, living in Aiken, SC I have coached many Eventers during the Winter months and their enthusiasm for this sport was infectious.
So, when my then four-year-old homebred Welsh/TB pony gelding did not sell as a show hunter, this middle-aged DQ swung her leg over his back and life was never the same. At 14.1, Gee is not a giant in stature, but you’d never know it when riding him. Feisty, athletic and irrepressible, he gives his rider a sense of confidence. I have to thank Sammie Di Maria for this. She started him, under the tutelage of my friend Mollie Moss and when Sammie went back to college, Gee and I started taking our first jumping lessons with Mollie. I can’t stress enough how far outside my comfort zone this was – yikes.
But Gee just kept trucking; bad distances, rider hanging off the side or in his mouth, and he would just keep jumping. Eventually I started to trust the concept and it became less embarrassing/painful to watch.
Our first show was a beginner novice at Stableview, the premier show facility here in Aiken. After dressage and cross country we were second — stadium was another story (rider was just awful), so we ended up in fourth place.
Shortly after that I met four-star eventer Kate Brown, who has a beautiful facility right here in Aiken and we struck a deal: I coach her in dressage, she became my Eventing coach.  I really appreciate her style of teaching, as does Gee. Her standard saying is, “He is just cantering over these fences – can’t wait for them to be big enough for him to start jumping.” 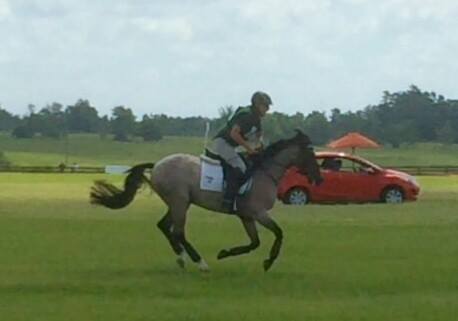 Over the last 12 months we have slowly made our way through beginner novice and moved to novice at  the Pinetop Thanksgiving HT in 2015, where we won for the first time. I was so thrilled – what a feeling of accomplishment ! This was followed by another win at Sporting Days and a second place at Full Gallop Farm. So here we are – going to AECs. What a blast I have had so far, thanks to my coaches and one wonderful ATP (All Terrain Pony).
Go Eventing.