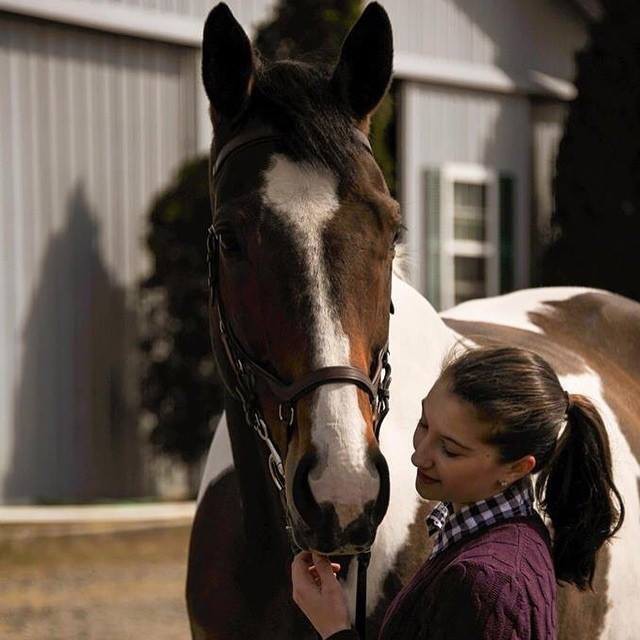 “Marty is colicking.” I blinked again and again, willing those words away. That word … COLIC … the one word that spreads panic and fear like wildfire. The word that makes your mind go blank and your body numb. The word that jump starts your heart yet halts your life. Every horse owner knows what tragedy this word could bring. And there it was.

Those are the words that will be stuck in my head for the rest of my life. Words that set the course for this story; one of remembrance, commitment, struggle, love and sacrifice.

It all started with a text. It was last October and Marty was living at a beautiful training facility in Califon, New Jersey. He was on the road to recovery and almost back in full work from a sidelining injury when those words took us on a detour I could have never imagined. I’ll start from the beginning.

Marty, AKA Masquerade Party, became a part of our family in 2010. Marty did not have much of a record or even experience. He was a big 17-hand Warmblood Paint and with me at barely 5’2”, we seemed an unlikely pair.

He had dabbled in cubbing and low level jumpers and honestly, when I went to see him I was not too impressed. In fact, out of all the horses I saw that day, he was my least favorite. And yet there was something about this unlikely partnership that made my mom curious. And sure enough, two weeks later, my mom picked him up to take him on trial for me.

I immediately fell in love with his personality the day he stepped off the trailer at his new home at Bit-O- Woods Farm located in Hainesport, New Jersey. In the beginning everything was going well. We were learning together and forming a great partnership. My trainer took him to a few Beginner Novice events and while his dressage was far from stellar, he tried his best in the jumping and put his heart and soul into cross country.

The progress was slow and at times headed in the wrong direction! There was a period that first winter I could not even get him to go forward at the walk around the indoor ring. He was halfway out the door. Yet, we continued to challenge and learn from one another – lessons that were immeasurable for both of us.

In June 2013, Marty and I completed both of our first preliminary events. From balking at the walk a few years earlier to having a preliminary partner felt amazing. Thanks to the endless support of my trainers, Megan Pappler and Lauren Lutcavage, I was finally able to realize how lucky I was.

My family (especially my mom) was terrified every time I went out of the start box. I wasn’t afraid though. Marty loved running cross country and I knew he would take care of me each and every time. We may have gone at Novice speed around the whole course, but we jumped every one of those green flagged jumps! I cried the moment I crossed those finish flags (and I’m pretty sure my mom did too!) I have never felt such a bond with an animal as I had with him. I had never felt so lucky! 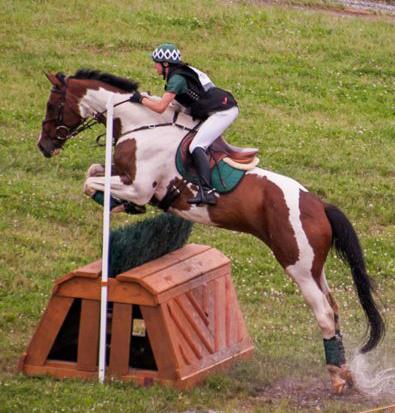 Marty and I completed a few more Prelim events before it was my time to head off to college. At first he came with me to school, but he just wasn’t adapting well to his new situation. Lack of turnout and my busy class schedule was less than ideal for his liking. He ended up going home after only three months to stay in training with Megan.

I was determined to try to have him with me again the following year at a farm adjacent to the school’s riding facility. Unfortunately, a few weeks into my second year at school Marty came up lame. Dr. Fugaro, former veterinarian at Centenary University, diagnosed a tear in his left hind suspensory and doctors at Mid-Atlantic Equine later confirmed my worst fear. Sure enough, his left hind had a good ole’ tear and an avulsion fracture.

His prognosis for a full recovery was poor but I didn’t lose hope. I truly had faith he would come back for me. Maybe I’d be one of the lucky ones.

I was willing to do whatever it took to get him better; this included multiple stem cell treatments and months of rest. To give Marty the best shot at a full recovery we decided it was in his best interest to go to a rehab facility. He started water treadmill therapy at High Brass Farm in Pittstown, New Jersey in February 2015 and continued his progress for five months.

Scan after scan we held our breath to see if any of it was working. Scan after scan we were told with guarded optimism that “things were improving.” Hours of therapy, hand walking, tack walking and finally tedious amounts of short trot sets were working. I was so happy that I’d be one of the lucky ones to have horse return from this type of injury.

In July, Marty was ready for more work and ready to leave the rehab. He was slowly brought back into full work on the flat and was even starting to jump small jumps. On Oct. 6, 2015, a full year after his injury, my mom and I took Marty back to Mid-Atlantic for his last scan. Waiting for what seemed like forever, we finally got the news we wanted to hear. His ligament had healed nicely and was holding up with the increasing load. Marty could return to full work.

With a renewed sense of enthusiasm, we started schooling cross country again and even discussing plans for the winter in Florida when I got the dreaded text … just three short weeks after that last scan.

I remember it clearly. I was in a Business Statistics class and hopped out of my seat as fast as I could to race to the barn. By the time I got there, Marty was already getting loaded on the trailer. He was not responding to any treatment administered by the ambulatory vet. We got to Brendan Furlong’s at 10:30 a.m. and by noon Marty was going in for surgery.

Things seemed dire. He had a hole in his mesentery and a loop of his small intestine had squeezed through and gotten stuck, becoming necrotic. After seven feet of small intestine was removed and five-plus hours of surgery, Marty was awake.

His prognosis for a full recovery was not great, and still I had to be hopeful. I already knew he was a fighter … maybe he had more fight left. Maybe … I’d be one of the lucky ones.

His post op progress was slow and not without complication. He refluxed every two hours for days. It was getting harder and harder to keep up hope. “What’s the longest you’ve had a horse reflux and survive?” my mom and I asked. We were told several days. One vet told us 20 days!

How could we hang on that long? The bills were mounting and our energy and optimism were dwindling. But finally the refluxing did stop and now we would wait again. He did not pass manure for almost five long torturous days and the day he did, we all cried of joy. Again, I believed Marty would fight to stay with me. Our story could not be over and I started to believe again that I was going be one of the lucky ones!

Obviously, my intentions and goals for him completely changed after we left the clinic. I no longer thought about galloping, jumping or competing … I just wanted him to live.

There would be four more episodes of colic between the months of December and April. Four times that the phone would ring bringing us the news we feared the most. Each time we were sure it was over, but Marty rallied again and again. Marty would return to the clinic again for three days of observation after a midnight colic.

My mom, who had become his caretaker when I returned to school, would go on to manage another colic under blizzard conditions where no visibility (and a state of emergency) meant no trailer could safely leave the farm. She put a video camera in his stall to monitor his wellness at anytime. So many people went above and beyond and for that I am forever grateful … one might even say, lucky.

I had five months of borrowed time with Marty. Five months of feeling his breath on my cheek when I blanketed him and feeling his muzzle on my back as I brushed him. I got to share cookies with him and tell him my dreams for the both of us. But Marty could not fight any longer and on April 2 nd his fight was over. We could not keep him out of pain and there was no saving him without another surgery. Even with surgery his chance of survival remained very low.

That day, I was not one of the lucky ones.

I lost my best friend.

While our hearts were broken, we know we made the right decision and we move forward forever changed by that day.

And yet, I am one of the lucky ones. Lucky to have been able to live, love and grow with this horse who was my everything for five beautiful years. I never imagined I could have an animal that made me feel better no matter what. I always felt he was with me … always on my side. He was with me at my best and at my worst. He helped me through anxieties, a breakup, and many other life transitions.

I am lucky for everything he brought into my world, and everything he left with me when he had to say goodbye. I think he knows that I did everything I could for him to stay with me. I know I will never have a bond with another horse the way I did with Marty, and I do not expect to.

Love your animals well with all your heart. They will never let you down.

Rest in peace, my sweet boy. There is not a day that goes by that I do not think about you. It has been a full year since his original surgery and I am just now able to write about this.

I cannot thank my friends, family, trainers and vets enough who have helped both Marty and I over the years. Thank you Megan Pappler, Lauren Lutcavage, Clarissa Wilmerding, Karen Randall, Patty Doyle, Mike Fugaro and Liz Perry for everything! A special thank you to Dr. McKreel, who risked her safety to get to Marty during the blizzard. I am lucky to have all of you!

And thank you to my mom and true partner through all of this. She not only opened her pocketbook, but she allowed her heart to be broken alongside mine. She had many sleepless nights and anxiety filled days. She walked him and watched him. She cried for me, and for him.

She tried to be strong when the rest of us couldn’t. She even said goodbye to him for me when I couldn’t be there. She made sure he was loved like no other.