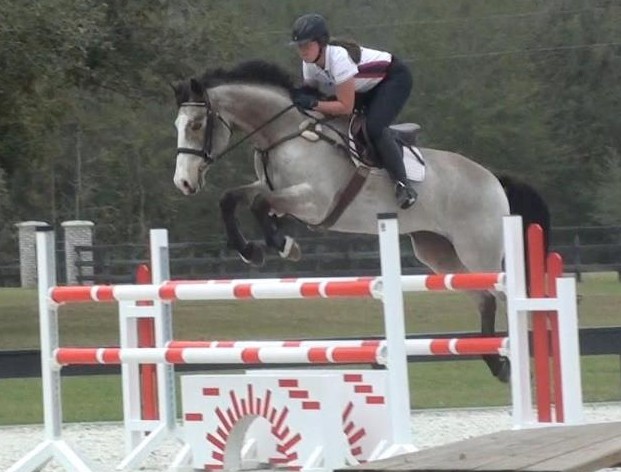 The Ontario teams for the North American Junior & Young Rider Championships were announced June 24. Coach Curtis Barbour made all the calls to the riders that morning, and immediately all of the texts were rolling in!

On the two-star team, he first called Jamie Kellock, then Lauren Clark and then finally April Simmonds and I. Unfortunately, I was in the middle of my little cousin’s sixth-grade graduation when the call came in. It happened to come in during the principal’s closing remarks; I still answered the phone, but with an awkward, whispering 30-second conversation.

Anyways, the coolest thing about this year’s two-star team is that we are all best friends — seriously, best friends. We all started riding with our coach Jessica Phoenix about three years ago . April had been riding with Jess for years before that, but Lauren, Jamie and I joined the Phoenix Equestrian Team all around the same time.

We all became such close friends almost immediately (although Jamie and I are cousins and have been super close since we were in diapers). I am beyond excited to share this experience with them! Not to mention we have a group of some pretty awesome horses that are hungry for some gold! The one-star team is also looking awesome; they have some pretty serious cross-country horses!

Fast forward to June 29, the last event before NAJYRC. All riders on both the one- and two-star teams competed at Wits End Horse Trials, making this the final preparation event. For most of the riders, this was a great last event.

April came first in the Open Intermediate, and Lauren came fourth. Jamie decided not to run the cross country on her horse because she is our most solid-cross country horse, and she had nothing to prove. It was also ridiculously hot, which played a huge role in the decision.

My weekend on the other hand, had a different outcome. Mustard (my horse, D’Jion) was a star in both dressage and show jumping, but cross country didn’t go as planned. Mustard left the start box with his game face on. He ate up the first five fences and the first coffin combination.

Jump 7 was a coop with a drop on the landing side that felt vertical. When you got to the bottom of the crazy steep hill, you immediately went back up an equally steep hill to an upright brush. Well, to the first jump, I saw a bit of a “flyer” distance and went for it. Don’t ever do that if there’s a massive drop on the other side — trust me.

On the way down the hill, it sort of felt like a garage sale — my reins were everywhere, my whip was up by my ears, I lost one of my stirrups — everything was everywhere. Coming back up the hill, I picked to a powerless distance, and Mustard couldn’t make a miracle happen even though he tried.

I ended up falling off over his right shoulder. I’m sort of glad it happened because I had a serious wake-up call, and now boot camp has been in full force! I definitely feel like I’m prepared for the challenging cross-country course at NAJYRC, and I now know what not to do to an upright up a hill!

Moving on from the not so perfect weekend at Wits End, the whole Ontario team went to Jacquie Brooks’ barn to run through our dressage tests and have some amazing lessons. Jacquie was so generous to offer her amazing facility and her time to the team.

Jamie and I went there the day before to have an extra lesson to really develop a clear plan moving forward to Young Riders. All of the horses looked amazing and are definitely ready for the dressage ring!

Here’s a clip of my dressage lesson with Jacquie:

Now we are two days away from leaving Canada (ahhh!) and the packing madness is in full force! All of the riders, grooms and organizers are heading to Kentucky on Saturday to have a two-day spirit camp at Team CEO’s farm. The farm is just minutes away from the horse park. We are all so excited and thankful that we get to have the horses in Kentucky a few days before the competition to get them used to the heat!