We’re thrilled that the team behind the Optimum Youth Equestrian Scholarship have allowed Eventing Nation to share some of the applicant essays from the first round. Applications for the next funding round are open through Friday, January 15, so be sure to submit yours before it’s too late! The Optimum Youth Equestrian Scholarship is designed to bring more opportunities to young equestrians who are in need of financial assistance in an effort to continue to break barriers of access. You can read other essays and learn more about OYES here. In this essay, meet Erin Oquindo. 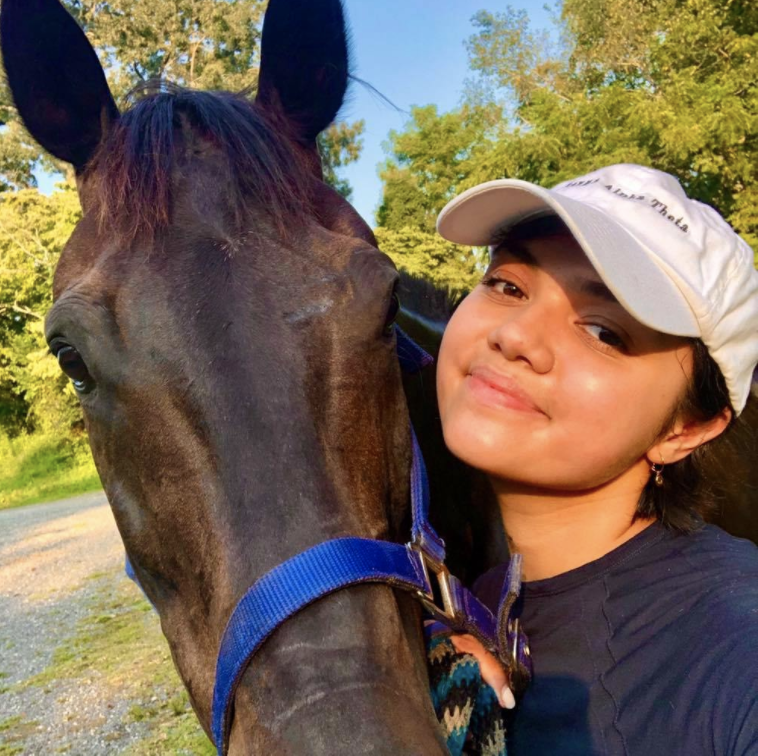 When I was a little kid, my mom and I would drive the 3-hours to Dickson, TN to pick up my half-brothers from their father’s farm, where they worked and lived on the weekends. Even though my mom was a barrel racer for years, she couldn’t stop my eyes from wandering to the various jumping rings we would pass on that long road to Dickson. So that’s how I initially became obsessed with it and started consuming all sorts of equestrian media from the books in my school’s library to taking hand-me-down Breyer horses from a family friend. After I started taking lessons at 7 years old, I was hooked.

I was fortunate enough to get a pony when I was about 10, which my parents and I paid for by all three working in various capacities for my riding instructor—I worked as a camp counselor and groom while my parents managed all the media and photography work in exchange for my pony’s board. Later on, I ended up taking a 5-year hiatus from riding, for most of my high school career and the first half of my undergraduate career—the space got too competitive, too expensive, and too white for me to comfortably continue. My junior year of college, I joined my university’s club IHSA team but dropped out a year later for financial reasons.

Now, I am trying to rebuild my life in the equestrian world with a monthly half lease on a horse named Mozart (also known as Mo, Bobo, Bubba, Boombah, etc.) and a great, understanding trainer who is helping me work through a lot of my emotional and physical pain points when it comes to riding. I ride a bit less than once a week now and it is my current goal to get to a financial, physical, and social place to go to the barn more and for longer, so I can really immerse myself and learn.

I’ll be honest—I am not looking to be the next Grand Prix rider or Boyd Martin or whoever (the vast majority of these folks are white cis people anyway and I could never see myself among them). I am not interested in showing extensively at the upper levels in that way. As my long-term equestrian dream, I simply want to one day get to a place in my life where I own and regularly ride a horse, grow in my skill and strength, and can dedicate myself to horseback riding as my primary activity outside my career. I would entertain it being a part of my career, but I just feel like I haven’t had the proper exposure to the horse world to really tell me whether or not that’s the path for me.

In the short term, I currently have the opportunity to ride the same trained horse consistently, and that’s the first time I’ve ever been able to do something other than ride various lesson ponies. I would love to spend more time getting to know him, building up my muscle and confidence, and advancing to the level I know I have the potential to reach if I were able to ride more and be at the barn more.

If you had asked me about obstacles to riding a year ago, I maybe would have answered simply with the financial struggles I’ve gone through and the few bouts with racist folks I’ve encountered endless times at shows, in my own barn, etc. But I really had a reckoning with why I took that five year break I spoke about from the equestrian sport, just a few months ago after George Floyd’s murder. I follow the popular equestrian podcaster, YouTuber, and +R training advocate Jill Treece (JetEquiTheory). A few months back, she was using her platform around that time to amplify black and brown riders and bring awareness to the fact that while there’s a lack of diversity generally throughout the equestrian world, media does a fantastic job of convincing us that there is no diversity to begin with.

Those of us who are riders of color and queer riders—we’re constantly convinced that we’re completely alone in what we do. It wasn’t until Jill started connecting me with these other riders of color, and—I’m a little embarrassed to say but also, I’m so thankful for it!—TikTok—led me to find an incredible community of queer equestrian folks, where I got to meet another nonbinary rider for the first time ever—it wasn’t until I started meeting all these people and following equestrian diversity alliance on Instagram and joining the Facebook groups and so on and so forth that I truly realized what a weight and a stressor it was to not see myself in those who did the sport. I have never once in my life met another Filipino equestrian. I’ve never come out as nonbinary to any trainer I’ve ever had, and as a result have sort of volunteered myself via my own silence to be misgendered by my trainers throughout my riding career.

Even with as kind a trainer as I have now, I fear coming out in the equestrian space because I don’t know the ripple effects of hatred and bigotry it may cause. I’d rather go under the radar and still be able to ride than feel like I’m getting quietly pushed out by those tides of racism and bigotry again. I felt so alone in the horse world for so long, and it’s incredibly difficult to put that feeling to words. This scholarship is the first time someone has said to me “I see you, and I know this is hard for you, and I’m offering you help.” That’s so huge.

As for a non-equestrian-related goal, it’s my dream to become a professor, with a focus on visual culture and abolitionist study and theory. That’s what most of my time was dedicated toward in undergrad and I would love to teach eager students about race, justice, history, and visual culture. It is a dream of mine to teach college-level courses in prisons so that people in prison have the opportunity to get college degrees while we actively work to dismantle the prison industrial complex in the meantime. Ideal situation for me—there will be no “prison” as we know them for me to teach in when I get to that stage in my life!