I am the co-owner of Autumn View Equestrian Center in Woodbridge, Connecticut. I am 30 years old, and we have been in business going on nine years. AVEC is an eventing and dressage barn that specializes in OTTBs and young or problem horses. I have been riding and working with horses for 24 years. My favorite part about my business is bringing along the young horses and watching and feeling their progression throughout their training, and helping riders work through difficulties with their horses and see how excited they are when they achieve the outcome they are looking for. 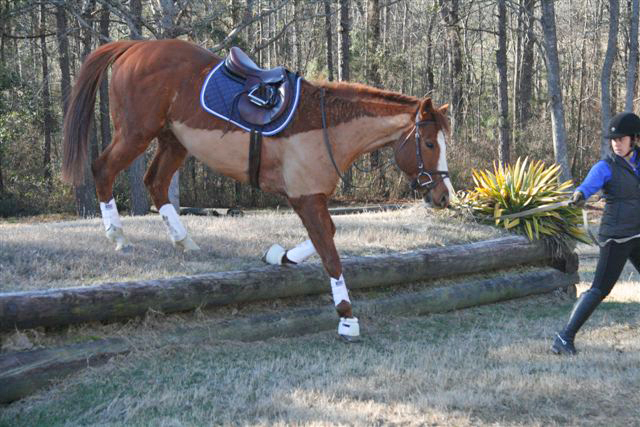 Nick gets the hang of the bank. Photo by May Emerson.

This time last year, I packed up a bunch of my equipment and one of my young horses. Ted, my boyfriend and business partner, dropped me off at Kait Schultz’s farm (whom I had only met through Facebook), to share a ride down south. We were about to embark on a five-day journey to Denny Emerson’s Tamarack Hill Farm in Southern Pines, North Carolina.

To say I wasn’t freaking out a little was an understatement. Most of December in Connecticut had been very cold, icy and snowy; not much riding had been taking place. After planning and finalizing all the details of our trip only one week from when we were leaving, there was definitely a lot to be done. Not to forget the nervous 4-year-old Thoroughbred, Nick. He would have to get clipped and sat on a few times before we headed down south!

So this was it; here I was waiting and hoping that it would also be a renewal in my passion for horses and training. 2013 was a bummer to put it lightly. I had lost an extremely talented up and coming young horse named Maker’s Mark. This tragedy struck just days after his first event in June 2013. I will never forget the crushing feeling of such sudden loss. Later that year in November, I would have to say goodbye to my 32-year-old mare, Hot Fudge. “Fudge” had been with me for 18 years and through a whole lot of life experiences with me.

I had been spending time trying to get my heart completely back into the sport I loved. But then again, as they say, the heart needs time to heal. No matter how many good rides I had, they wouldn’t bring back my lost horses. That motivation would have to come from something else. 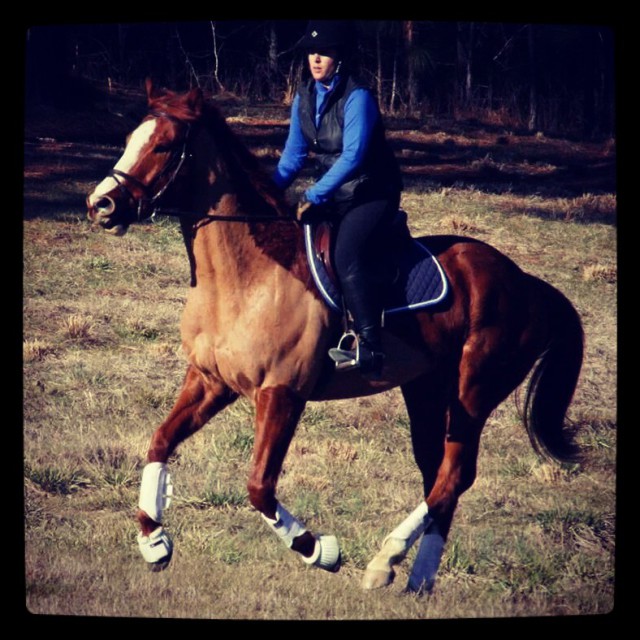 Nick schools cross country for the first time. Photo by May Emerson.

I had arrived at Kait’s farm and settled Nick into his stall for the evening. I dragged all of our stuff out of my truck and trailer and left it in a big heap in front of her barn. Then off drove Ted, leaving me to wait and wonder how my next five days with a complete stranger would turn out.

Lucky for us, in the horse world there is always work to do. So when Kait showed up, we immediately started packing the trailer, then feeding and setting up hay nets for out 2 a.m. departure. By the time we were sitting down stuffing ourselves with pizza, I felt as if I had known her forever. Arriving in Southern Pines later the next day, I knew we were going to have a great time together. Apparently during 12 hours of driving you can learn quite a bit about each other.

Once we arrived, we settled the horses in, exhausted but excited for our rides over the coming weekend with a legend. The nerves of not knowing what to expect were gone and in their place, the familiar drive inside of me seemed to be coming back. I was beginning to be thankful for what Marky had given me, instead of just sad. At most, I got to feel what a truly upper-level horse feels like, and I know I will eventually find that feeling once again.

I had chosen Nick as the horse to bring with me, as he was a fairly unconfident horse. I had hopes that this trip would help him mature a bit. Although he had never raced, he had been over-trained on the track and handled a but roughly. His “chill” go nowhere fast attitude definitely wasn’t suited for the racetrack.

Over the six months that we had him, he mastered walk, trot, stretching into the contact and had begun some lateral work. Although the canter was just not something he was interested in. So, yes, I took a horse that didn’t like to canter, nevermind jump, to ride with Denny Emerson.

Denny’s inspiring methods of training had Nick cantering and jumping small obstacles in our first lesson. Although it wasn’t easy, we were firm in a tactful way and positively helped him get over that canter “hump” that was holding him back from progressing in his training. I don’t think I’ve ever cantered more rails on the ground in my life than I did in that lesson. Each rail we cantered over gave more push from behind and a little more jump in the canter. 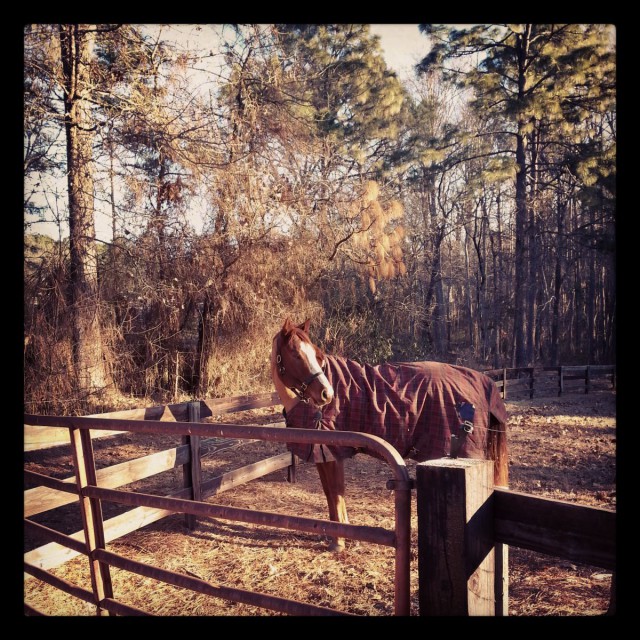 Every rail was also a metaphor for helping me to rediscover my passion. Don’t get me wrong; it would have been fantastic to take a horse who was a little bit more schooled to ride with Denny. But I’m convinced I chose the right horse. I really did need another point of view. My trainers at home and I had started to treat him too delicately because of his past experiences at the track. Denny kicked me back into gear.

The next day, Nick schooled cross country for the first time and answered every question with a little bit of gusto that he used to lack. Thankfully, Denny also had the foresight for me to school the ditch and the bank with him in hand. This was brilliant because once he figured it out on his own, it was no big deal with me in the tack.

I could go on forever about my trip because there is so much more to tell, but I think you get the picture. The timing of my trip down south in 2014 couldn’t have been better. It refreshed my riding and training, but also brought some enthusiasm about the business as a whole.

Spending a week with someone as zealous about horses as Kait seemed to remind me of why I started my farm eight years before. Not that I didn’t love what I do, but as with anything, you get tired, beat down and broken. We all need something that revitalizes us once in a while. This trip to me was more of a reminder that once you find your passion in life, never let it go.

It’s now February of 2015. It’s 13 degrees, and I’m trailering horses to Corinna Scheller Fleming’s Lost Island Farm for our bi-weekly dressage lessons, spending the 1-1/2 hour drive to reflect on things that really influenced me in the last year.

While 2014 wasn’t the best year for me personally, it was a turning point for the business, and I’m thrilled with our great string of green OTTBs that we have been getting to know. I absolutely feel back in the game where the riding and training is concerned. Let’s do this 2015; I am chomping at the bit! So, thanks, Ted; thanks, Kait; and thank you, Denny, for an amazing trip that came at the perfect time.