Many thanks to Greta Hallgren, Area V Adult Rider Coordinator, for submitting this report from the 2018 Area V Adult Riders Summer Clinic, which took place June 2-3 and featured U.S. eventing’s show jumping wondercoach Richard Picken. Have a clinic report to share? Email it to [email protected] 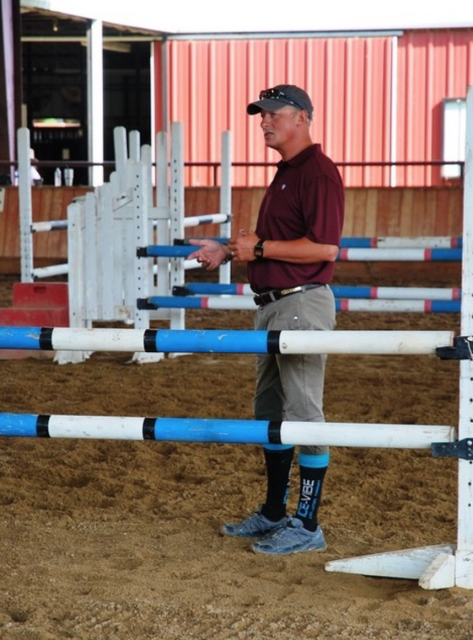 Not only would this horse be good a getting out of sticky situations, he would be named after a delicious raspberry jam filled cookie, like the ones Richard enjoyed as a child growing up in England. I discovered this while feeding him over the course of two days we spent at Buck Branch Farm in Wilmer, Texas, home of Rebecca Brown, Advanced event rider and USEA ICP Level III certified instructor.

Over the course of the clinic, I also learned that Richard and his twin sister were literally born in the business of show jumping. I mean literally. Like on the way to a show that their mom, also a show jumper, was traveling to.

So, it’s only fitting that Richard is currently one of the top show jumping coaches in the United States and is the particular favorite of eventing’s superstars like Phillip Dutton, Boyd Martin and Will Coleman.

Which is why Area V Adult Riders ranging from Beginner Novice to Advanced levels flocked to Texas in the first weekend in June and braved a heat index of 107 degrees to be able to ride under his coaching. 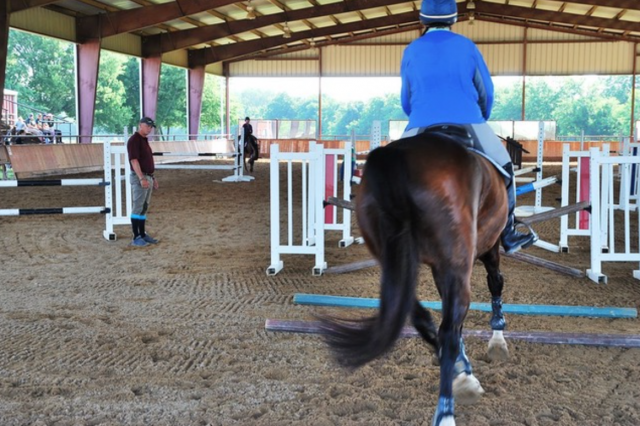 On day one of the clinic, Richard set up exercises that encouraged horses and riders to practice the skills necessary for successful showjumping rounds. Things like adjustability, correct pace and the ability to move off your leg were the themes of the day.

“When warming up, I like to get right to it,” he said. “Don’t waste time just cantering around. Make every moment count.”

Lots of time was spent getting to know each horse and rider combination and focusing on the details. He watched everyone individually, coaching them through lengthening and shortening both their horses’ trot and canter strides and then through lateral movements. It was at this point that he also took away everyone’s spurs if they were using them.

“I don’t use spurs when working at home. I save them for the shows. That way your horse remains reactive to your leg. And in competition, if you need a little boost, you have it.”

“The key is to establish the correct canter. A powerful canter doesn’t mean fast,” he clarified. “It means working from the hind end. As long as you have the correct canter and you support them with your reins, horses can jump well even out of an off stride.” 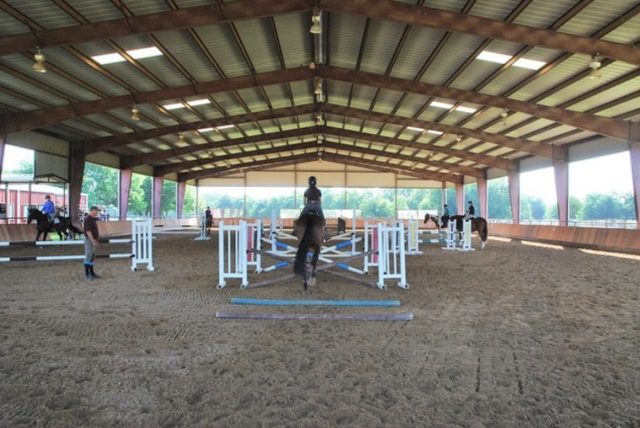 On day two, Richard set another course that again, addressed the keys of a successful round. (He did let anyone who wanted them have their spurs back.) He first went through his approach to the show jumping warm-up, and discussed how coming off a cross country course the previous day can affect a horse’s jump.

“On cross country, a horse tends to jump longer and flatter. That’s why we want to start the show jump warm-up by encouraging them to get more round over the fences straight away.”

His goal is to also have the horse jump as few fences a possible. For most horses, Richard likes to start with a placing pole and a “rampy” oxer. If the horse jumps that well, he then immediately progresses to a square oxer with no ground line. Lastly, he moves on to a vertical with a ground line.

“I don’t mind if a horse knocks a pole in warm up because that helps wake them up for their round,” Richard adds.

He also stressed the need to remain prepared and reactive to every jump in the round. If you get in short, you will have to move up to make the distance. If you get a long spot, it will affect your canter to the next fence even if you are going around a corner to get there.

“It all works together,” he adds. “That’s why you always need to work your horses even on the flat to make them adjustable and listening to you.”

Richard was fond of asking riders their opinion on how their rounds went before offering his thoughts. When one rider completed her round, he tested her by asking what was wrong with it. He was pleased when she confidently turned to him and said, “Nothing!” 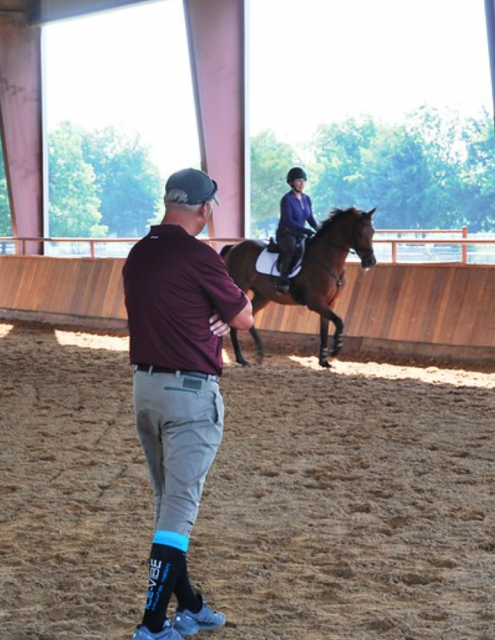 Silver linings come up often when talking with Richard. He’s attuned to looking for the good in a situation that appears initially to be negative. Like when talk turned towards the heat of the day. He pointed out that the covered arena allowed for a constant breeze that made his teaching bearable.

Richard’s exercises were challenging to many. We are amateurs after all. But everyone agreed that the silver lining to riding in the excessive heat, was that they were leaving with plenty of constructive “homework.” And as I stood watching as each group as they left the arena, I couldn’t help but notice the grins Richard Picken had put on everyone’s faces.