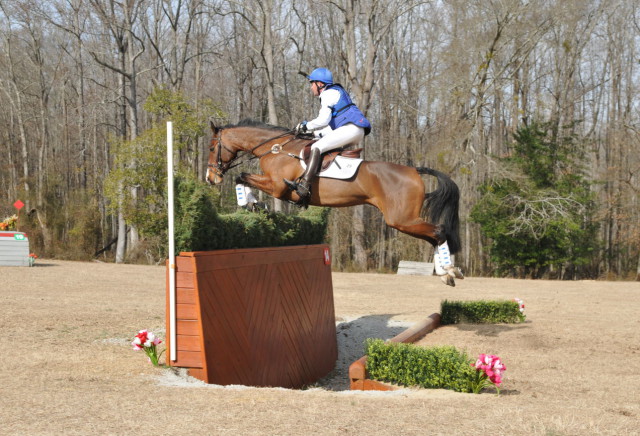 Pine Top’s first horse trials of the year got under way today with four Intermediate divisions running a one-day format. It was a frigid morning to begin the day; the thermometer read 24 degrees during an early morning course walk. While there were some fairly fresh horses in the show jumping that began at 10:30, the sun shone throughout the day and the temperatures warmed to the mid-50s, resulting in a perfectly lovely day.

Phillip Dutton and Tom Tierney’s Holsteiner gelding Fernhill Cubalawn moved up from fifth place after dressage to win the Open Intermediate I division, despite 3.6 time penalties on cross country, to finish on 32.3.

“I didn’t try to gallop too fast and just wanted to give Cuba a nice, steady run,” Phillip said on his Facebook page. “He’s a pretty good cross-country horse, so it was a nice first outing of the season for him.”

Derek di Grazia’s highly anticipated new course was unveiled today, with quite a few new fences. Beautifully built and making good use of the terrain, the new jumps maintained the Pine Top flavor we’ve come to love, with wide, solid, galloping fences. No one made time, though a few came close, which had a significant impact on the results.

“I think Derek di Grazia did a nice job with the course. Certainly for the first outing of the year for a lot of the horses, usually you have a coffin or a corner causing trouble, which we saw. Overall I think it was a great start to Cuba’s season,” Phillip said.

Indeed, the most troubling fence on the Intermediate course was fence 11abc, a coffin with a triple stack of logs at element A and a left-handed corner on a bending line at element C. 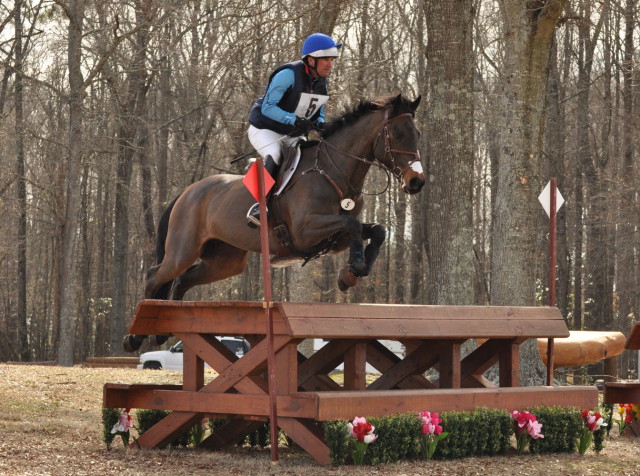 In second place on a score of 39 was Lizzie Snow and Coal Creek, owned by Kathryn Rosson and Diane Snow. They had a tense moment in dressage warm-up and I have to compliment Lizzie on the tactful way she relaxed the gelding and went on to score a 30.2.

Michele Kuchta and Rubens D’ysieux  led the division after the first two phases, heading into cross country on a score of 26.5. A few too many time penalties dropped them to third.

It was fabulous to see Becky Holder and Melissa Town’s Thoroughbred Can’t Fire Me back in action for the first event since their fall at the American Eventing Championships last September. They put in their typical stunning dressage test for a 29.3. A rail and 13.6 time penalties across country put them in fifth place to finish.

Will Faudree and Jennifer Mosing’s German Sport Horse mare Caeleste were the winners in Open Intermediate 2. A 28 in dressage put them in third place. They jumped a clear show jumping round and added only 6 time penalties on cross country to finish with plenty of room to spare over second place Emily Beshear and Shame on the Moon, who remained in second place throughout the day, even with 16.4 time penalties on cross country.

Will also finished in third place in the same division with Pfun, an Irish gelding owned by Jennifer Mosing. They made an incredible leap up the leaderboard from 21st after dressage. They jumped a double-clear show jumping round and posted the second fastest round of the day on cross country after Phillip and Cuba to move up from 17th after show jumping. 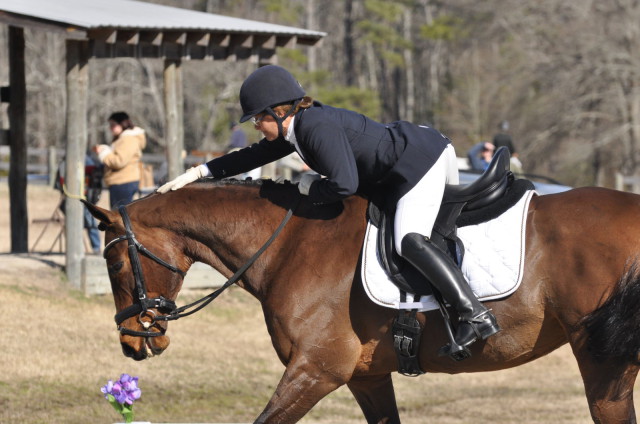 Frodo of the Shire and Lisa Borgia. Hoofclix.com photo

Lisa Borgia and her own Thoroughbred Frodo of the Shire were active on the Intermediate Rider leaderboard, beginning in seventh with a dressage score of 35.4. Two rails in show jumping dropped them to 9th place, but the standings were significantly shaken after cross country; the coffin caused particular trouble in this class, with six pairs having problems there. Six of 13 starters in the division finished, and Lisa and Frodo’s fast, clear round moved them from ninth into first place to finish.

The leaders after dressage, Daniela Moguel and Cecelia, last week’s Open Preliminary winners at Sporting Days, picked up a refusal at the coffin but still finished third, less one point ahead of Sarah Dunkerton and Old Man Moel, who jumped clear with time. 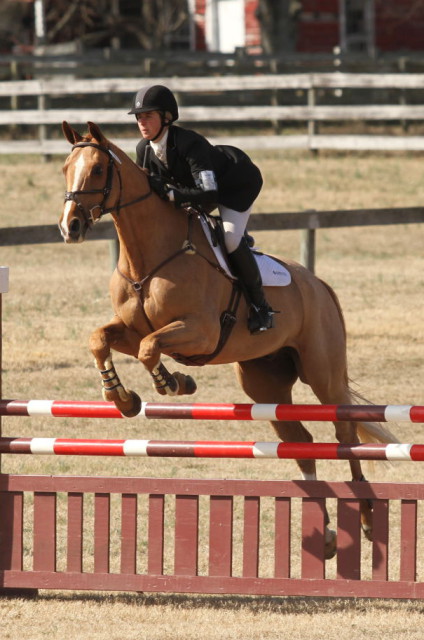 Lindsay Beer and her Trakehner gelding El Paso were the Jr/YR Intermediate winners. They performed a lovely dressage test for a 29.1 and second place. A quick cross country round gave them the edge over Jenny Caras and Fernhill Fortitude, who finished second. Janelle Phaneuf and Irish Ike round out the top three.

Preliminary, Training and Novice get started at 8 a.m. Saturday and will run over a two-day format. We’re thanking the weather gods for a beautiful forecast and are looking forward to a great weekend. 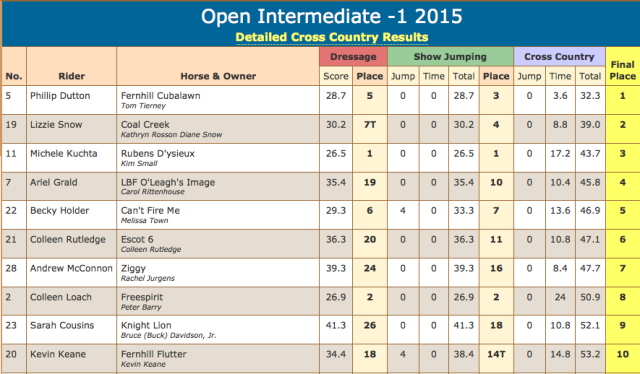 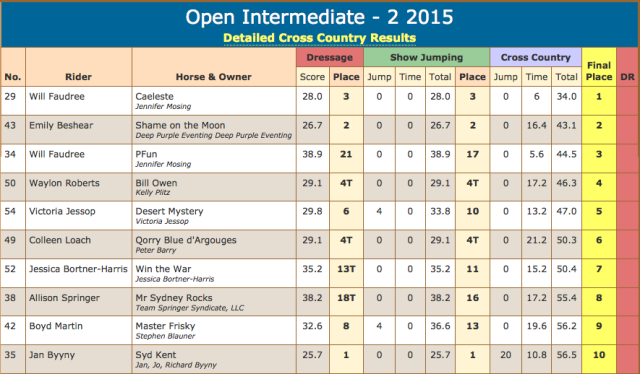 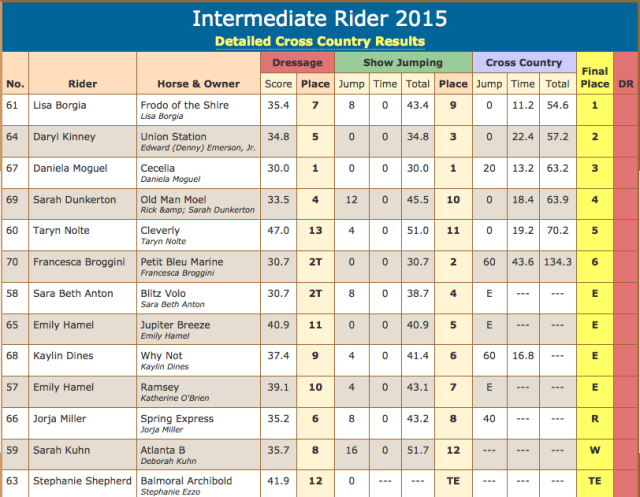 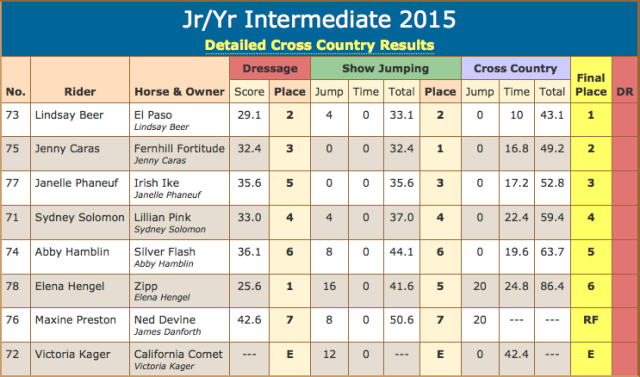