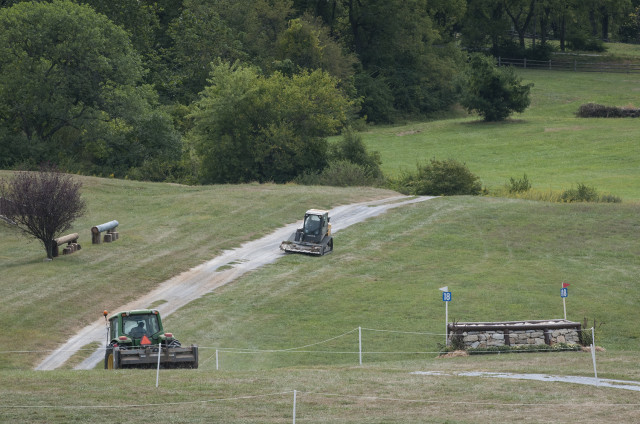 With it now going on three weeks since the Unionville, Pennsylvania area has seen any measurable amount of rain, the grounds crew at Plantation Field International Horse Trials has significantly stepped up their efforts in the last week to prepare the footing for this weekend’s cross country.

While there is some rain in the forecast for Saturday and Sunday, we currently have beautiful weather with no precipitation in sight over the next two days, and Plantation Field International Executive Committee member Boyd Martin said heroic efforts are underway to aerate, aggravate and water the parched ground.

“I’ve been in constant contact with our groundskeeper Jamie Hicks, who has been working relentlessly for the last seven days on aggravating the galloping lanes along with dumping thousands of gallons of water all over the track,” Boyd said. “Obviously it’s a main concern for everyone because there are top class event horses here and we obviously want to see them run on the best ground as possible.”

Mike Etherington-Smith, the course designer for the CIC3* and CIC2*, walked the track with event officials yesterday morning to pinpoint specific areas of the course that need a bit more work, and those areas are receiving the most attention from the aggravator today.

“The footing is on the firm side, but what we have done is more aggravating and aerating and some watering, and we’re sanding on the landing side of fences starting tomorrow morning. Everything that can be done is being done, and it will be as good as it possibly can be. You can tell where the footing has been prepared. If you get outside the ropes, it’s immediately noticeable,” Mike said.

“It’s an outdoor sport. Horses have to run on this sort of ground, and they also have to run on very wet footing. It isn’t going to be perfect because the ground needs rain, but I would be happy to run my horse on it.”

Local farmer and Plantation Field groundskeeper Jamie Hicks is spearheading the efforts to improve the footing both for this weekend and beyond.

“We are aerating, which slices the ground to break up the compaction, as well as aggravating, which shakes the ground loose. We will touch up certain areas with the aggravator, and we’re going to try to water a fair part of the track starting tonight. We haven’t done much watering yet because it just evaporates.”

As for just how much water is going to be dumped on the course: “We have a 3,000 gallon water tank truck and just added a pump that can fill it in one minute. The actual course is about 30 acres. We’d like to at least get a truck load of water per acre, if not more if we have time, so that would be 90,000 gallons.”

The footing is responding well to the aggravating so far, and the ground is noticeably improved even from yesterday in some of the more firm areas. Jamie also has been spreading thousands of pounds of mushroom compost on the galloping lanes for the past two years now, which has helped combat the lack of rain.

“We’re building up the organic matter level. It’s a long-term plan with the mushroom compost to keep adding organic matter to the soil, and eventually we’ll be able to withstand a dry spell like this without any issue,” Jamie said. “In a couple of years it will be totally different. We’re fighting against Mother Nature, but we’re going to put in 100 percent and make the footing the best that we possibly can.”

Until then, EN salutes Jamie and the whole grounds crew — with a special shout out to the Embree brothers — for their hard work. It’s going to be a long few days for these guys, and we can’t thank them enough for their dedication to the ground with the welfare of the horses in mind.