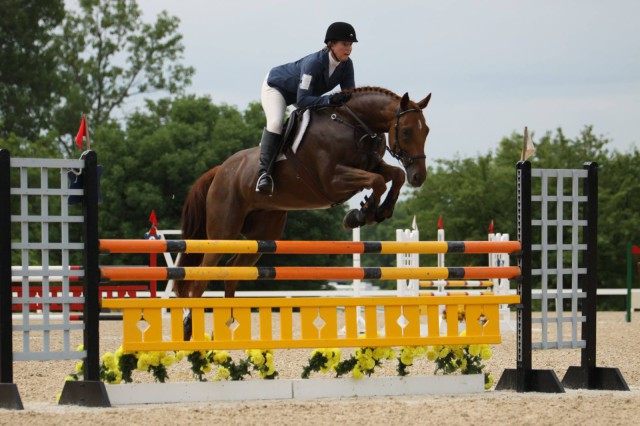 Whew! It’s been quite the whirlwind weekend between Luhmühlen and Great Meadow, but there were several other events taking place around the U.S. as well. Let’s take a look at some of those results.

Four of this weekend’s horse trials served as fundraisers for local Pony Clubs. These are traditionally fun and friendly competitions to attend and serve to benefit the future of the sport through education and horsemanship experience.

The Midsouth Pony Club Horse Trials takes place at the Kentucky Horse Park in Lexington. This was a very well attended competition, with riders from Starter all the way to Intermediate/Preliminary, with a whopping seven Beginner Novice and six Novice divisions.

In Open Intermediate/Preliminary, Hope Walden and Elaine Walden’s Lily Langtry took an early commanding lead, scoring 28.1 and crossing the finish line just one second over the optimum time. Dorothy Crowell and Hennison finished second on a 37.5 in the horse’s very first Intermediate.

Meghan O’Donoghue had Pirate out for his first event since Rolex. They were third after the first two phases but withdrew before cross country. Kentucky got a good bit of the same rain we saw passing through Virginia yesterday, which may account for the multiple withdrawals prior to the start of cross country across the levels.

In Open Preliminary-1, Nita Sanfilippo wins the biggest move award with her own Alarmabull. Out of 18 competitors in this class, two finished on their dressage score: Nita and Erin Pullen and her own Tag. Rails were flying in show jumping and time was tough to catch, as is often the case at KHP. Nita moved from 14th after dressage all the way up to second with a double-clear show jumping round. Another double-clear on cross country secured their win.

Melissa Miller-Slusser and High Finance picked up time on cross country but were well enough ahead after dressage and show jumping that they could afford it. They finished on a 35.3 to top a division of 19 starters. Courtney Carson and Bird is the Word moved up from fifth to second while Molly Tulley and Miriam vaulted from 14th to finish third as the only pair to finish without additional faults. 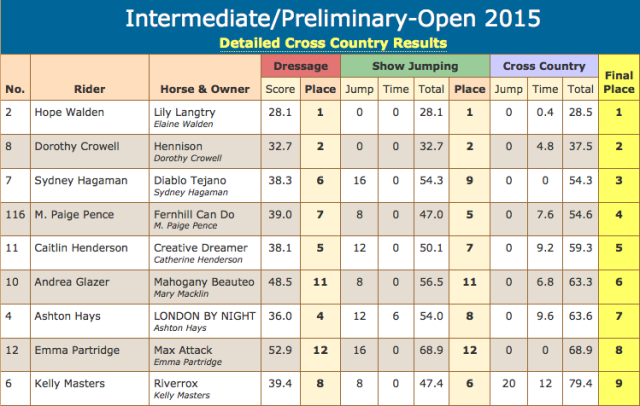 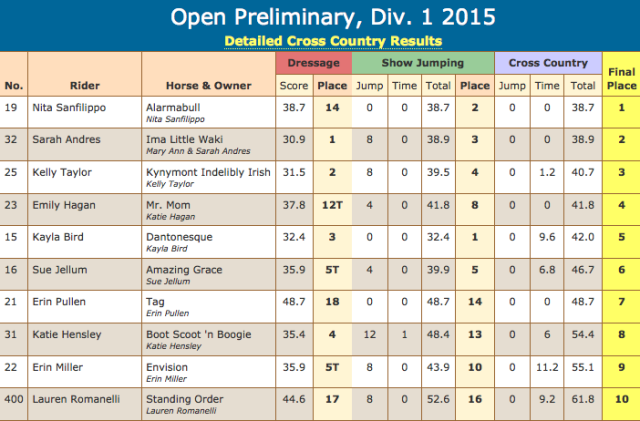 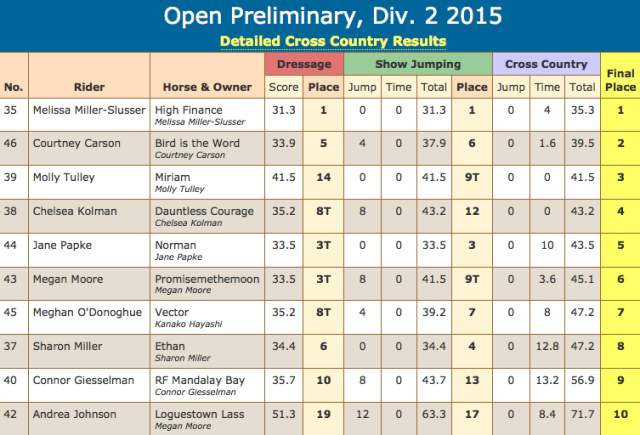 Shepherd Ranch Horse Trials in Santa Ynez, California benefited the Shepherd Ranch Valley Pony Club. Founded in 1976, it is one of the oldest Pony Clubs in the area.

Stacey Winter and Serenade performed brilliantly in dressage to score a 20.7 and take an early lead in Open Preliminary. A clear cross country round and one rail in show jumping secured their first Preliminary win. Gina Economou and Samantha Magowan’s Calidore scored a 28 in dressage to tie for fifth. One time penalty on cross country and a double-clear show jumping round moved them up to finish second. Taren Atkinson and Gustav rounded out the top three.

Kelsey Holmes and Heart of Gold SE led from the start in Preliminary Rider, adding nothing to their dressage score of 33.0. Ruth Bley and Rodrigue Du Granit were second and Dawn Robbins and Kleary’s Foolish Heart were third with a rail to add for each. 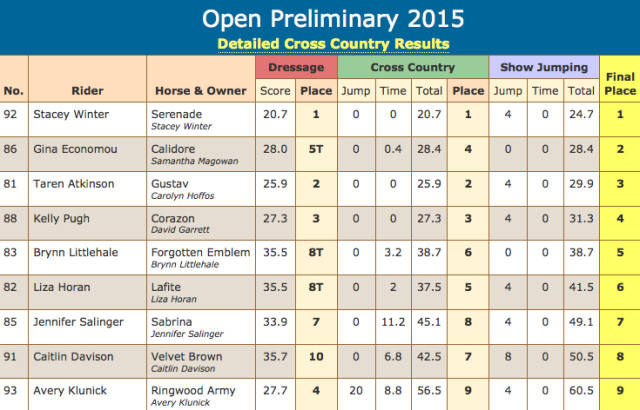 Fox River Valley in Barrington, Illinois had a huge turnout with more than 270 horses and very well attended lower level divisions. Fox River Valley is one of the oldest events in the country having been established in the 70s. The cross country takes place in the lovely Spring Creek Forest Reserve.

There was quite a bit of shakeup after cross country in the Intermediate/Preliminary, but Kristen Rozycki and Full Circle held their own, finishing well ahead of the pack on their dressage score of 27.7. Hayley Lofgren and American Rhythm added two rails but moved up from sixth to second while Sam Kelley and Someday Never Comes moved from seventh after dressage to finish third.

There was a lot of movement on the leaderboard in Open Preliminary, with plenty of rails and a number of time faults, but, like Kristen, Madigan Murphy and Willdebrant led from the start, adding minimal penalties to finish 10 points ahead of the competition. Catherine Amrich and Hermann were second, and Jonathan Ketzler and Chances Are came in third.

Preliminary Rider had 21 starters, and the winner proved that eventing isn’t always a dressage show as she catapulted up the leaderboard from 17th place after dressage. Kristen Burgess and Regatta were the only combination to finish on their dressage score and they were rewarded in spades, or rather, a blue ribbon. Michelle Mercier and Prince of Kiltealy were second and Anna Hasselquist and Houston were third. 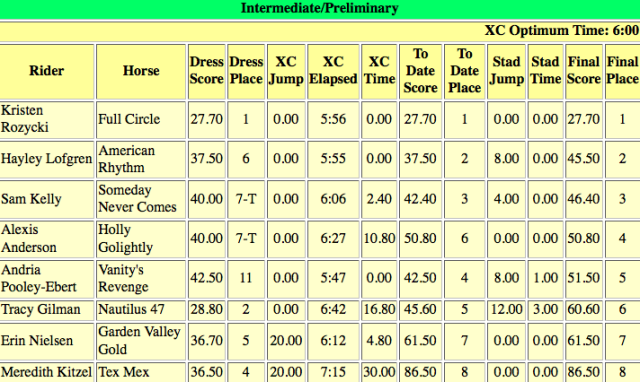 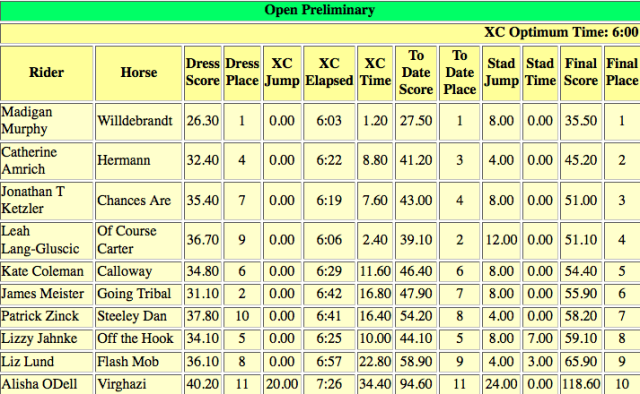 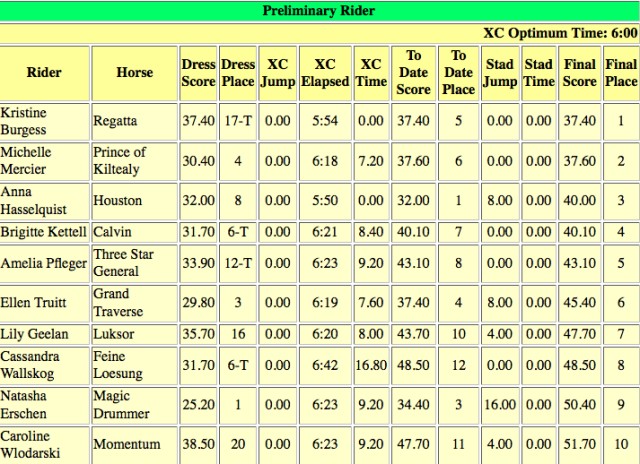 Lost Hounds Pony Club Horse Trials in Edinboro, Pennsylvania welcomed Beginner Novice through Intermediate riders. The live scores show Intermediate and Preliminary as having run as a combined test with Holly Shine and Sunday Afternoon Mission winning the Intermediate and Rachael Davis and In Stride topping the Preliminary.

Finally, Golden Spike Horse Trials in Ogden, Utah welcomed Intro through Preliminary competitors. Summer Peterson and her own Jake the Fish led the Prelim from the start, adding 2.4 time penalties to their dressage score to finish on 30.8. Golden Spike is good to them, as they were the winners in the same division here last year.

Half the field in Preliminary had trouble on cross country which heavily influenced the final scores. No one in the division made the time, but curiously, the top three all added 2.4 time penalties on cross country. 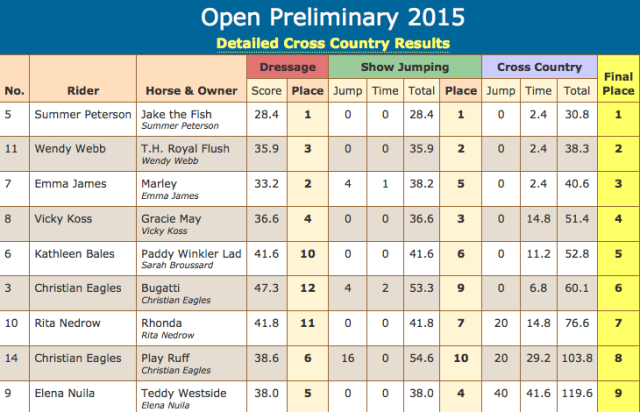