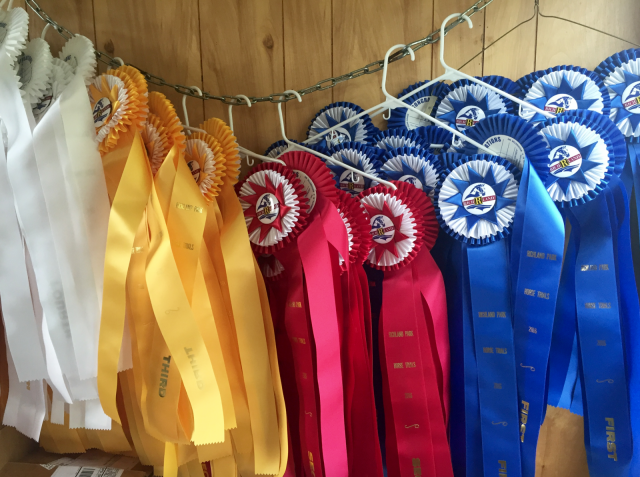 “When you can appreciate just how precious a horse is, then maybe you can value a ribbon less.” Photo by Leslie Wylie.

After watching cross country at an event last Saturday, I asked the TD if I could make a citizen’s yellow card? She said no, which is probably very smart on behalf of USEF to not allow such a thing. It would be a disaster if any ole Jill Schmill could go up to another rider, flip a card and say “You terrify me.” (But, come on, wouldn’t that be satisfying sometimes?!)

The TD then asked me what I saw and here is the report I gave her:

I was sitting up there in the shade with my students watching the Junior Preliminary 911 division and I saw enough to make my blood pressure boil. I saw a rider literally two wheel around a corner to a bank with the horse going about 550mpm. Not surprisingly, she missed at the bank because her corner was sickeningly fast and her poor horse had no idea what hit him.

Three falls later … the final bone in my craw was a different girl, who did the same freewheeling around the corner to the bank and made about 20 people gasp with fright. Shockingly, she survived that horrific display of how to effectively ride a bank and later in the course came to a downhill approach to a corner still going way too fast. Her lack of balance and excessive speed resulted in her horse leaving a leg and she splayed across the grass with her exploded vest, gasping for air while the horse happily cantered away.

I got to her quickly and helped her unbuckle her vest so she could breathe better. Horse is just fine, rider walks off the course just fine and probably thinks “My crappy luck!!!!” as she walks back to the barn. Ha! Better luck next time, chicka.

OK, so by now you can tell that I am still upset. That last little paragraph might be a tad bit passive aggressive. And here is why:

The last girl did nicely come up to me and thank me for helping her with her vest the following morning. Of course I was happy to do it, and told her I was so grateful that she and her horse were fine. But, I am a teacher and I cannot pass up this opportunity to ask a junior rider to reflect upon why she ended up face first in the dirt.

The long and short of this conversation is that this junior rider told me that she knew the time was hard to make and that is why she was going fast. She knew that she was unbalanced and too fast the entire way around the course, and yet she was totally unapologetic about the fact that she was trying to get home inside the time. When I told her that if she was my student I would take away her watch and demand that she ride the course WELL, not for a ribbon, she literally rolled her eyes at me.

AND THAT, ladies and gentleman, is why I am so pissed.

It’s one thing to know that you are riding dangerously and to say that you really need to get better control of your horse and you will work on it in the future. And it is a totally different thing to know that you are riding dangerously and admit that you really don’t care because you were going for TIME. I am happy to say that I did not murder this teenager right then and there, as her mother was also in attendance and she might not appreciate my teaching methods. Maybe her trainer is the one telling them to go for time? Probably. Or maybe it is all the other teenagers in the group who are egging each other on to get ribbons? Probably. But this is a serious problem that needs to be outed.

Pride cometh before the fall. That is such an apropos quote for this instance. I would not be so upset if it were not for the lack of humility that her speed was the cause of the fall … and that the excessive speed is bad. She clearly understood that she was going to fast — she told me so. But she did not feel responsible for causing her horse to hit the jump.

Here is a little bedtime story:

One of the most amazing displays of horsemanship that I have seen with my own eyes is the change that Laine Ashker has made since her fall with Frodo Baggins at Rolex in 2008. These days, her riding catches my breath because it is SO good. She went back to the drawing board with her coaches and worked very very very hard to repair some holes in her cross country attitude and position. The results are astounding. She is now a virtual model of how to ride effectively cross country over modern courses. She is fluid, harmonious, fast and effective. She is smart and appreciative, and above all she is humble.

It is your responsibility to deliver your horse safely from the startbox to the finish line. Only you are up there having a conversation with your best friend. Your coach is not up there with you, your parents are somewhere else and your friends are at the mall trying on new shoes. You are the only one up there listening to the breathing and the gallop. And only you can value what that horse means to you. When you can appreciate just how precious a horse is, then maybe you can value a ribbon less.

Read more from Meika at the Polestar Farm blog.