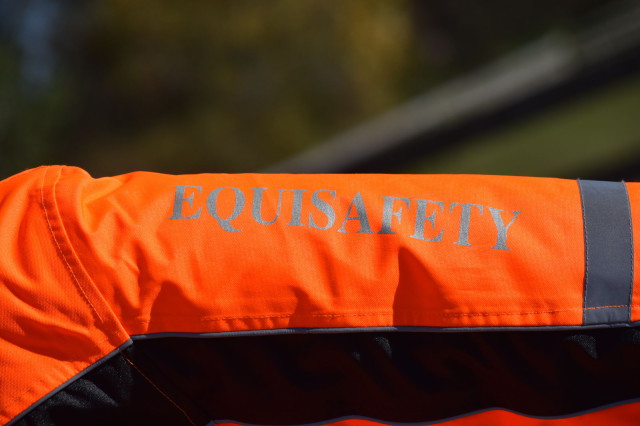 One of the other aspects that I personally like are the areas with reflective detailing – which basically span all sides – this includes a silver Equisafey logo on the left sleeve – Photo by: Lorraine Peachey

Have you ever walked into a room and felt like everyone was staring right at you? It’s at point that I wonder if I put together that awesome of an outfit…or if I’ve gone a bit overboard from a flashy perspective. Like maybe those sparky shoes or bold pattern mixing that I tried was a little too much. But hopefully it’s the former. And that I’m rocking that outfit.

I’m totally not someone who likes a lot of attention…well, most of the time. I do tend to gravitate towards BRIGHT colors. And I like adding a (little) bit of sparkle, or dare I say bling, to my outfits. Just something to make things a little more interesting.

So while I don’t like to stand out like a sore thumb, I do like the feeling of being an original. Which means living by my own sense of style, rather than just copying other trends.

There are occasions when I absolutely want to be SEEN though. And hacking out is one of those times–especially when hunting season is starting up. One of the things that I love about our farm is that deer usually seem to frequently hang out in the hay fields and woods. Which is really neat when you get to go through the year watching the little spotted fawns frolicking around the fields from the Spring grow up.

And while no one actually hunts on the farm, I always get a little nervous when this time of year rolls around, and folks are out hunting for Bambi. While I’m nervous for Bambi, I’m also very safety conscious for myself and my horses. Because I feel like I can never go overboard when it comes to safety! 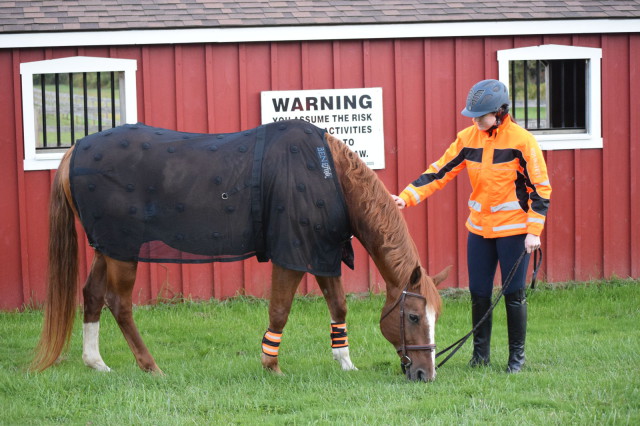 I found that the orange of the Aspey Jacket was almost florescent in my opinion–and I personally LOVED it – Photo by: Lorraine Peachey

The biggest concern on my mind is making sure that I am VISIBLE when I’m riding. Which means that I try to wear something bright, and maybe just grab my red saddle pad when I’m heading out to ride. But I don’t feel that many of my brightest colored pieces from my wardrobe are enough sometimes. And buying men’s construction or work high visibility gear might be safer, it just did not seem as though it would be very flattering.

Which is why my ears perked up the first time I heard about the brand Equisafety – since they make outerwear for riders that is highly visible and fashionable. And that keeps me from having to shop for men’s outerwear, for which I am eternally grateful.

I was beyond thrilled to have the chance to try out Equisafety’s Aspey Jacket for the season – firstly, because it’s been getting chilly outside, but mostly because I have no doubt that people SEE me when I ride.

After looking at the photos of the Aspey Jacket online, I was expecting it to be brightly colored when it arrived. But when I actually pulled it out of the packaging, I found that the orange was almost florescent in my opinion–and I personally LOVED it. Because when I’m riding this time of year, I want to make sure that I am visible. So visible, it’s like getting smacked across the face. 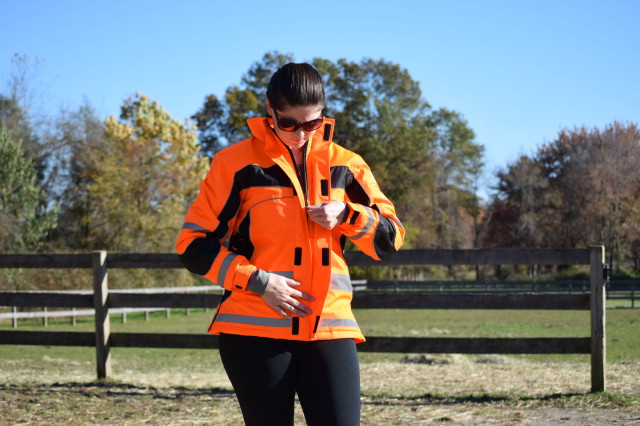 But one feature of the Aspey that I really like is the fact that once I zip up the coat, I have two flaps that lay over top of, and velcro shut over the zipper (so that it is not exposed to the elements) – Photo by: Lorraine Peachey

I was pleasantly suprised when I first tried on the Aspey Jacket, because it is heavy enough that I will be able wear even colder of Winter – though I’ve found it to be a  nice weight to wear during the Fall season as well.

The zipper running up the front of the coat feels sturdy to me. But what I really like is the fact that once I zip up the coat, I have two flaps that lay over top of, and velcro shut over the zipper (so that it is not exposed to the elements). What a cool little detail!

I also found that I like that the Aspey Jacket is styled for women, so that I don’t have to feel like I’m wearing something baggy. While I like some clothes with a relaxed fit, baggy clothing always makes me feel frumpy. But the Aspey coat feels like the angles are cut to fit quite nicely, and I think that it lends a very flattering appearance when I’m wearing it.

One of the other aspects that I personally like are the areas with reflective detailing – which basically span all sides. Silver colored reflective bands span across the front and back of the jacket, as well as around the arms and wrist areas.

Also, the black areas of the coat are trimmed out with silver reflective piping – and the Equisafety logo on the left sleeve also appears in a silver reflective coloring. So between the bright coloring of the jacket, coupled with the reflective detailing, I feel covered. 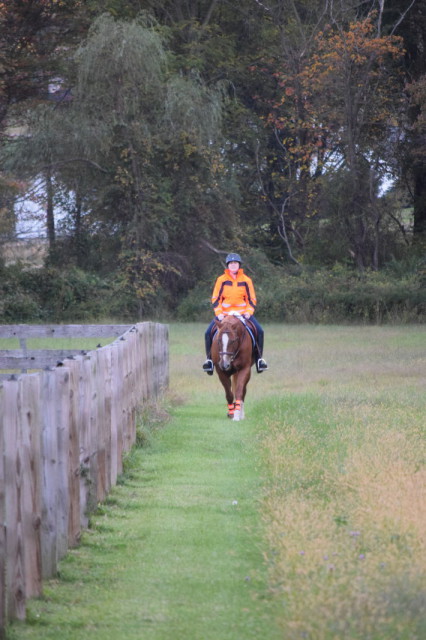 I’m told that I’m very easy to SEE, even when hacking out in the back of the farm from up at the barn when I’m rocking the Aspey in all of it’s bright orange glory – Photo by: Lorraine Peachey

Adding to the function of the Aspey Jacket are two zipper vents in the rear, which can be unzipped when I’m ready to ride for an improved fit in the saddle. And, I also find the sleeves to be functional, as the openings combine both elastic with a Velcro pull strap, which help me to get a snug fit. This helps to prevent air and unwanted hay from going up my sleeves. Finally, the Aspey also features two side zip pockets, as well as a hidden pocket on the inner right chest that has a Velcro closure.

Another pretty cool feature – for riders who want to wear their high visibility gear while riding near a road, there is also a triangle that you can attach to the back of the Aspey Jacket that reads ‘Pass Wide and Slow’. The triangle is easy to attach or detach – you simply attach the top to Velcro hidden under the neckline, and then the two bottom corners attach to what look like belt loops on the coat.

Wearing the Aspey Jacket to ride in has provided me with the right combination of comfort and warmth…and VISIBILITY. I find that the zipper pockets are large enough to store my large smartphone in it’s Otterbox, among other items. 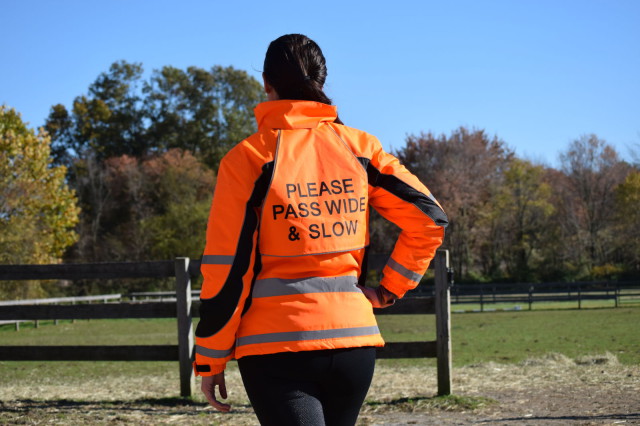 And for riders who want to wear their high visibility gear while riding near a road, there is also a triangle that you can attach to the back of the Aspey Jacket that reads ‘Pass Wide and Slow’ – Photo by: Lorraine Peachey

The jacket also remains comfortable during riding, and doesn’t make too much noise, or bunch up in any weird places. I also like how soft and smooth the inside lining feels against my skin as well. And I’m told that I’m very easy to SEE, even when hacking out in the back of the farm from up at the barn when I’m rocking the Aspey in all of it’s bright orange glory.

I also wear the Aspey Jacket outside for barn work in the hours before dawn and after dusk – and the comment that I get from others is that they can see me even in the dark, because of the reflective piping.

The Aspey Jacket is available through High Visibility Sportswear in North America (and there is also a site for riders located in the UK) – it comes in three different (but VISIBLE) colors, including orange, pink and yellow. While I really gravitated towards the pink, I wear the equally lovely orange. Because I couldn’t ride my geldings around while wearing pink. The Aspey Jacket has a retail price of $115.00.