If you’re looking for a saddle pad that will hold up to heavy use, keep your horse cool, and look snazzy, the Iconic Equestrian Original 2-in-1 Saddle Pad is the one for you. Read what Aubrey Graham has to say to it after putting it through its paces at Kivu Sport Horses.

Let me start by saying that after over a month of heavy use, this saddle pad still looks nearly as good as when it came out of its bag. It is as functional and durable as it is pretty, and in an environment like my Thoroughbred training facility, those qualities go a long, long way. 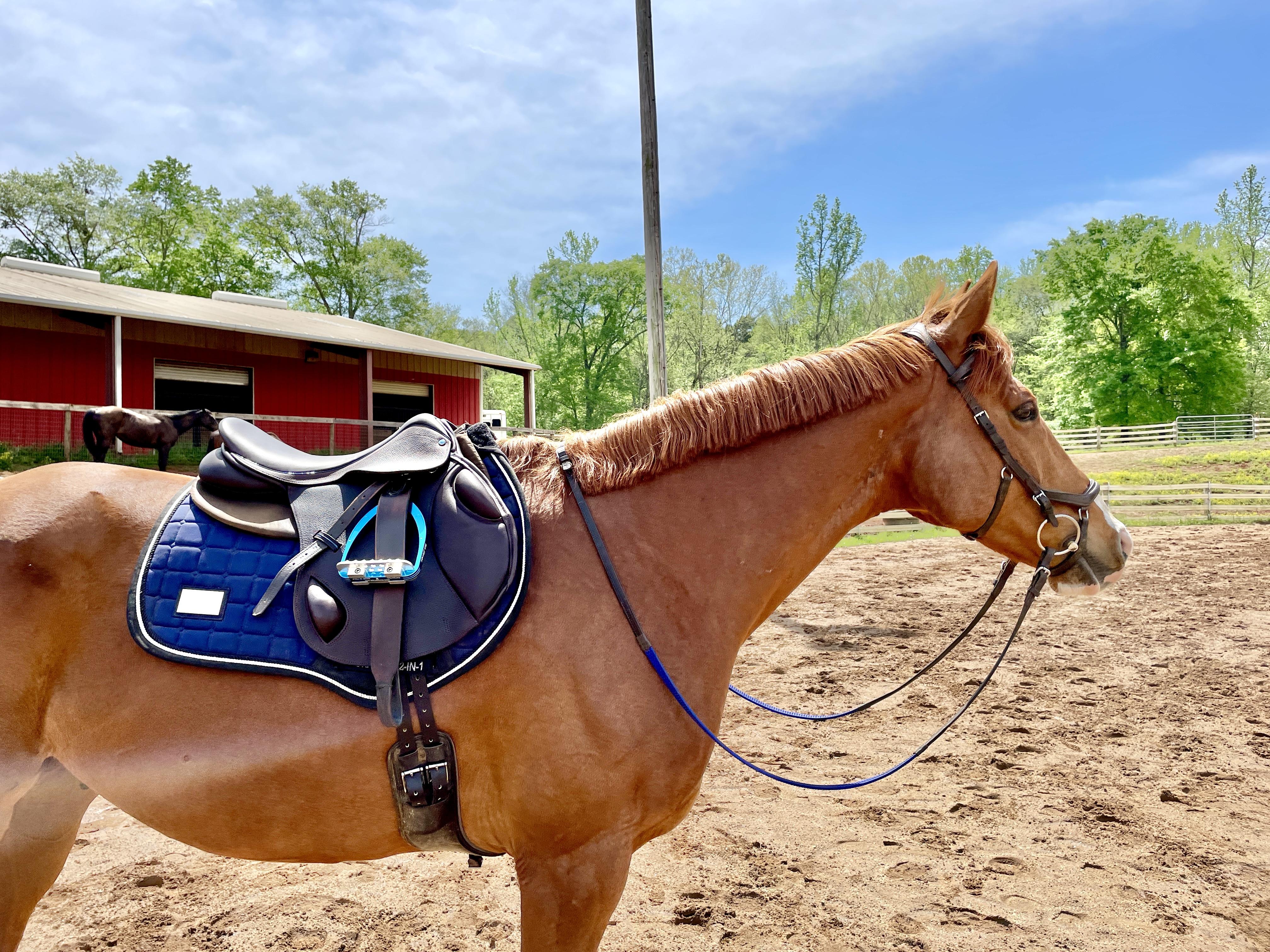 Photo after over one month of use. Photo by Aubrey Graham.

In an industry where saddle pads are a bit of a dime a dozen, and everyone is sporting the trendiest jump cuts and colors, this attractive pad stands out for its ingenuity. Besides the blingy logo on the side (which, might I add, after quite a bit of heavy use, is still shiny), spine support, and reinforced girth area, this pad’s biggest technical addition is its second layer. 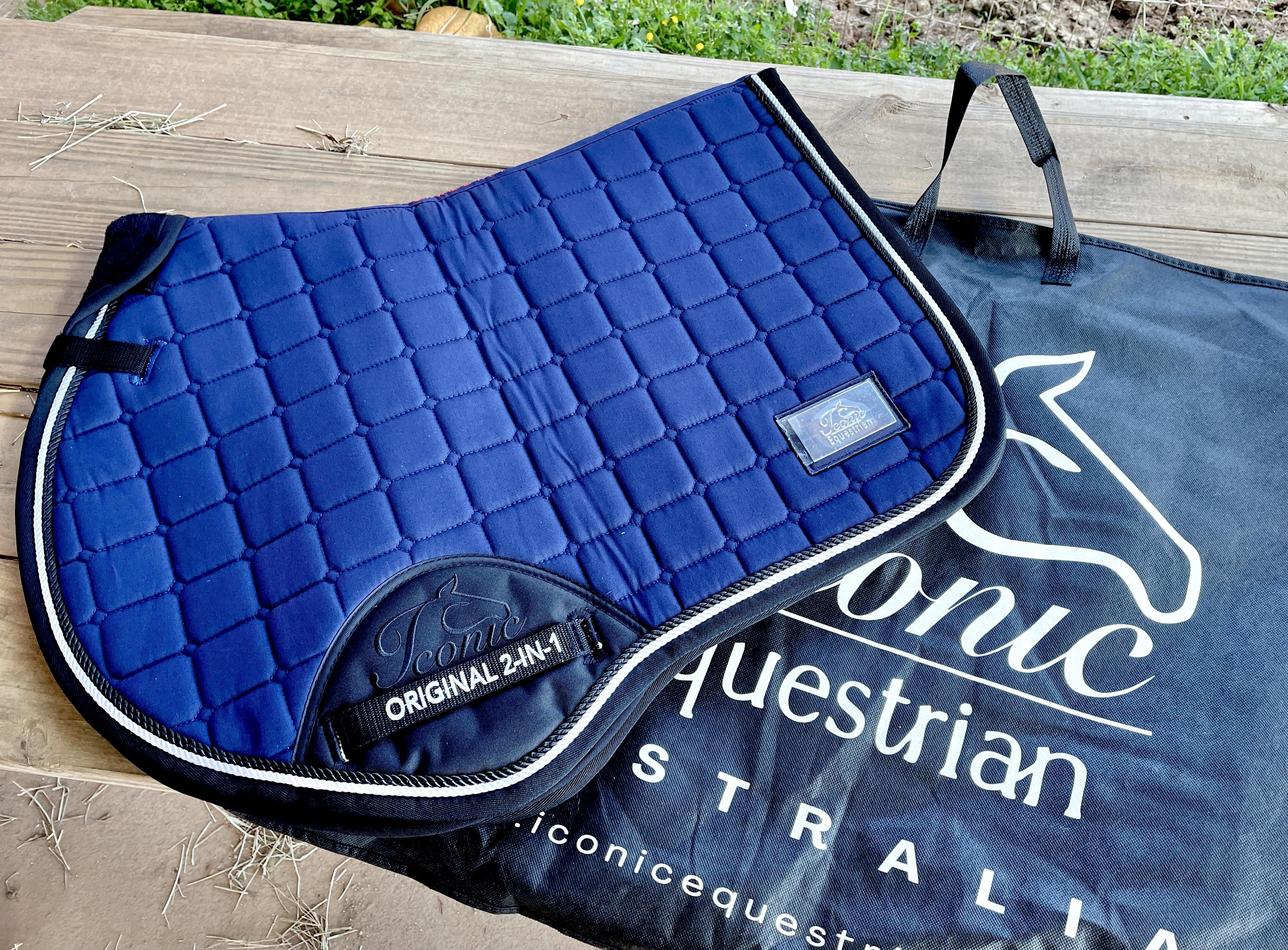 On the top, you have what looks like a standard, high-end jump pad (though these also come in dressage cut). The colors are rich (and there are a bunch of classic and fun brights to choose from), the padding is sturdy, and the double piping holds up to both dirt and general barn abuse. 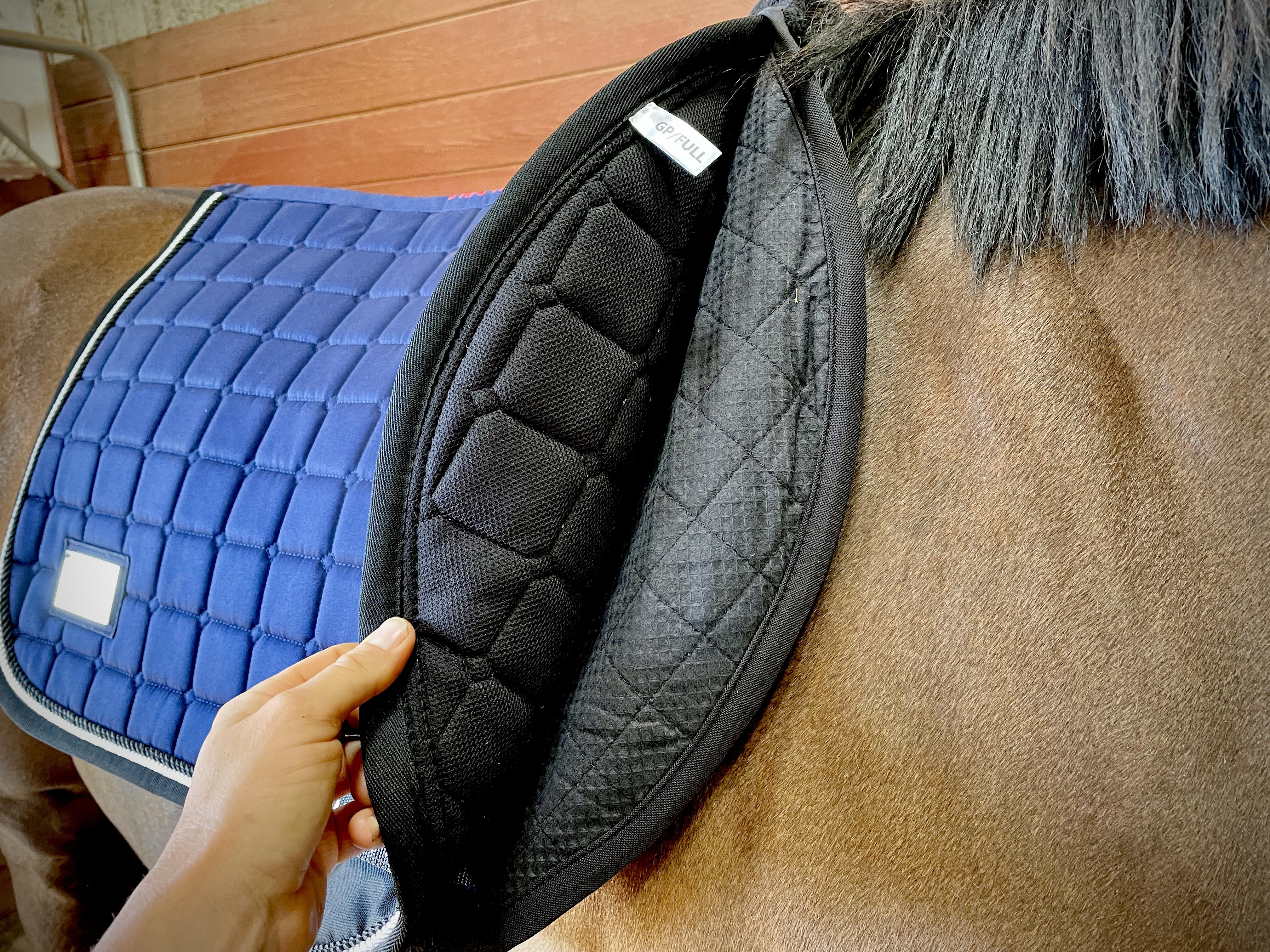 Underneath, however, you have a cut-to-fit second layer with fancy fibers and strategically located Velcro to hold it in place. The under-pad is created from a special towel-like material composed of heat-reactive fibers that simultaneously keep horses’ backs from overheating or from getting chilly. I can’t tell you how the science works there, but I can tell you that my sensitive-backed Thoroughbreds never once complained. In fact, they all moved wonderfully in it and I think they liked how snazzy they looked.

That said, I was dubious at first. Saddle pads are so simple — why make them more complicated where things can slip, slide, or bunch? Then I rode it in. And then I rode in it again. Then I put the pad in the usual rotation of horses (at least eight a day, where pads get to dry in between rides and then up on another back) in a dusty, m10-floored barn. 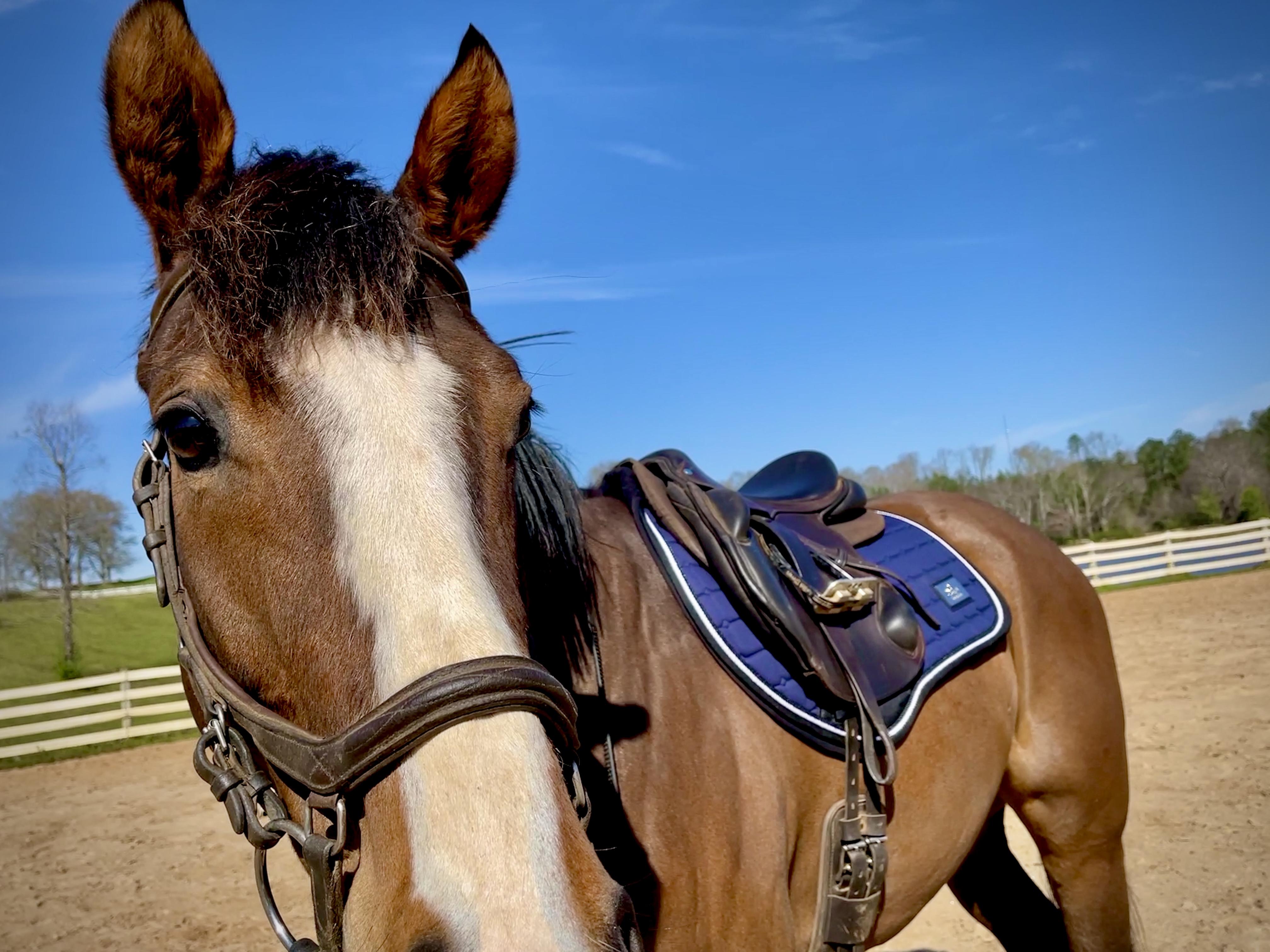 Once it got sufficiently dirty (which with the wicking material, actually took longer than I expected), I unattached the two parts, tossed the towel layer in the wash and reattached it once clean and dry. The pad held up. Not only that, it rode just as nicely after cleaning and reattaching – which was not terrifically complicated, thankfully.

The full spine velcros together, and there are patches at the shoulders and behind your calf to make sure that the two pieces remain one item as the horse moves. Further, the wither folds up and velcros on top to secure the two pads together and the girth holders slide through and Velcro. Overall, taking it apart and putting it together did not require a manual, and only took a few seconds to get it right. 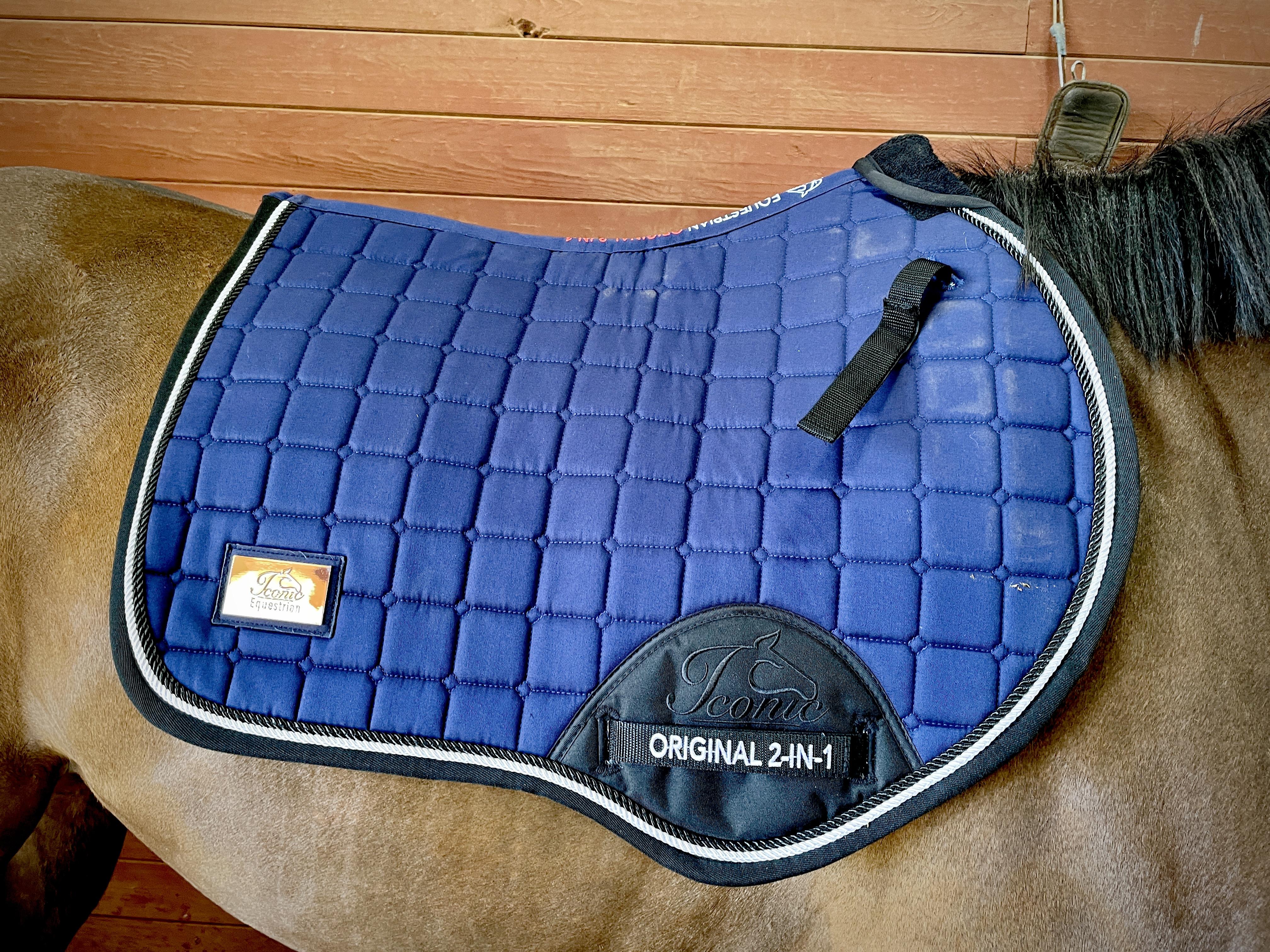 Probably the only thing that took getting used to about this pad was that the billet straps are for once, actually useful. I’m normally one of those folks who cuts them off and relies on the girth straps to hold the saddle pad in place. However, these keep the front/shoulder of the two layers from pulling in different directions while you ride. Once I started using them, the whole contraption held together super well. I ride in a monoflap County, so I ended up just tucking them under my half-pad and found that such a set up worked nicely to keep them together.

So, the take-away: I really like this pad and so do my horses. That the Iconic Equestrian 2+1 not only holds up, but also continues to look bright and fancy while being a key pad in rotation at my barn and keeps my sensitive Thoroughbreds happy and cool in the mid-Georgia spring (where weather is in the 30s one day and the 80s the next), I’d say this Australian-built saddle pad definitely is worth its retail at $119.95 US dollars. In fact, now that I know they have bright green ones, too, there might be another that needs to become part of this facility.

Plus, they’ll be doing a giveaway for an Achieve Equine bundle pack: 2 Six Packs of FLAIR Strips, 1 VIP Pad, and 1 Iconic Equestrian 2-in-1 Pad. Simply fill out a comment card at the booth for a chance to win. Winner will be selected by random drawing Sunday afternoon. Need not be present to win.