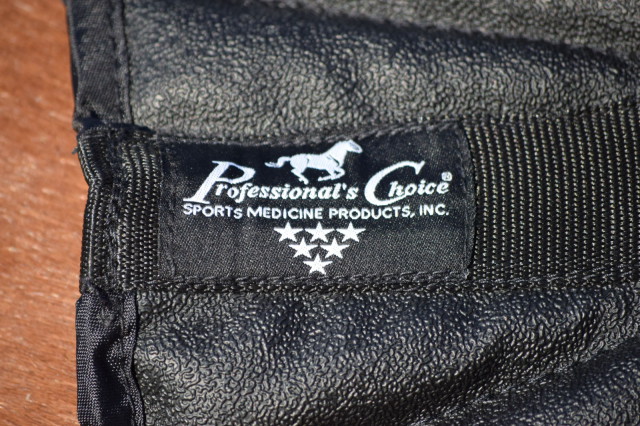 Professional’s Choice logo found on the spine of the Gina Miles Under Pad. Photo by Lorraine Peachey.

With the holidays coming up, it’s a time when I like to reminisce about holidays past and spending time with my extended family. Since it just doesn’t happen all that often, every time the majority of my extended family gathers together, it’s always a super entertaining time. Every. Single. Time.

I specifically remember eating many a Thanksgiving or Christmas meal sitting at the kids’ table of some variety — since I’m one of the youngest members of my extended family on both sides. Sometimes I was at a card table with folding chairs. Or sometimes I got lucky enough to get a “big person” chair, complete with cushion.

Which was great — except for when my feet struggled to reach the floor at that age; I was left trying to sit on said wooden chair with a tie-on cushion. When that was the case, I was sliding all over the chair every time I reached for another Grand’s biscuit. Not. Fun. And there was no way that I wasn’t going back for more biscuits.

I feel the same way about my saddle — it should stay in place right where I put it. I think it’s a safe assumption to make that I’m not alone with this particular mentality. And there are really a lot of different ways to keep your saddle in place. When I think back to the years I spent riding with only a quilted saddle pad, it’s no wonder that I usually had to stop in the middle of my jump lessons to reposition my saddle and tighten the girth. 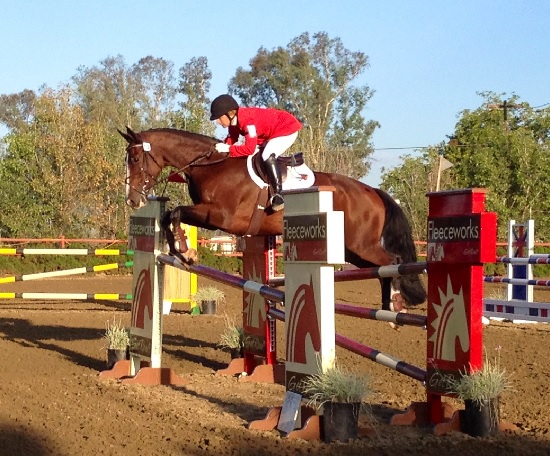 I’ve used a number of different types of pads with non-slip properties that have all seemed to do a really nice job for me. A lot of times, I also like to pair my non-slip pad of the day with a breastplate as well, because I feel like it gives a little extra stability, and I just like the appearance that it lends. And most recently, I’ve had the opportunity to try out the Gina Miles Under Pad from Professional’s Choice.

At first glance, the Gina Miles Under Pad from Professional’s Choice looked like a type of non-slip half pad to me in photos that I had seen. But I was excited for it to arrive so that I could check it out in person. Once it did, I pulled it out so that I could look it over — and I was definitely surprised when I did. I found that the Under Pad has defined channels running down the length of the pad. And when I picked up the pad, I could feel that the channels felt firm enough to lend support and a bit of a cushion for the saddle.

Gina was kind enough to chat with me about the design of the Under Pad and discuss the benefits that it can provide for both the horse and the rider. A product by the name of Brach (also can be called Air Ride) is used within the Under Pad — this particular material has been used by Professional’s Choice in their western pads, as well as pads for pack mules.

The Brach (or Air Ride) is actually blown into the channels of the Under Pad and is contained in the individual bubbles that are visible from the outside. So the pad actually contains impact prevention, as well as non-slip properties. 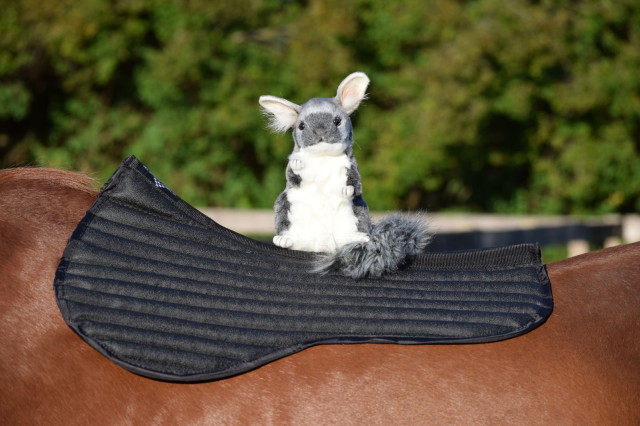 Chinch, you’re going to have to move at some point so that the product testing can begin. Photo by Lorraine Peachey.

Another great feature of the Under Pad are the air channels. Gina explained to me that “the air channels help so the horse’s back doesn’t get hot” while it is in use. Because of the channels, air is able to circulate while you are riding, so that heat is not trapped under the saddle.

Gina also commented that “obviously everyone wants their saddle to fit perfectly” and mentioned that the Under Pad can also help with saddle fit as well, especially in the case of high-withered horses, when the Under Pad can help to provide some lift to improve the fit of the saddle.

And according to Gina, you can “just hose it off at the end of the day — it’s easy to clean.” Not only that, but Gina went on to tell me about the normal under pads that she has used in the past and how they end up wearing down over time. Gina said that she now uses the Under Pad under pretty much all of her jumping saddles, and sometimes even under her dressage saddles, and the pad “keeps it shape nicely over time.”

As for me, I’ve found that the Under Pad has been both easy and effective for me to use. I simply place it in my horse’s back and then put a regular pad down before positioning the saddle. Of course, I have to make sure that Chinch is out of the way first — since he seems to have a tendency to want to occasionally jump in to help out with product testing these days. 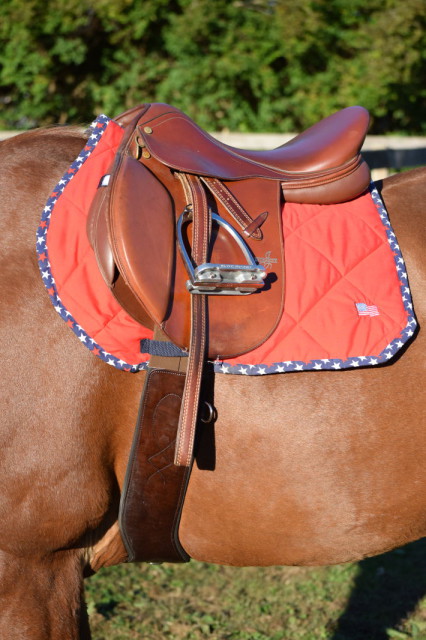 I could not visibly tell that I was using the Under Pad underneath my saddle and regular pad. Photo by. Lorraine Peachey.

Once I positioned my saddle, I noticed that the Under Pad just seemed to create a nice cushioned area for it to sit on. And after tightening my girth, I also found that I could not visibly tell that I was using the Under Pad underneath my saddle and regular pad. I opted not to use a breastplate during the time that I was testing out the Under Pad so I could really get a good feel for how it really functioned from a non-slip perspective.

And I was not disappointed. While in the saddle, I did not feel as though I had saddle slippage when using the Gina Miles Under Pad. Even during more lengthy rides or hard(er) working sessions, I found that the pad helped my saddle always stay in place quite nicely and even provided impact protection as well.

After riding, I was also happy to see the that channels of the pad did their job well and allowed air to circulate while I was riding, so my horse did NOT have a a slicked up, sweat soaked “under the pad” area on his back either. Which is definitely helpful, because when I’m racing against daylight at this point in the year, the last thing that I need after a ride is to have to try getting a sweaty patch to dry off before the sun goes down and I have to worry about my horse getting a chill.

My horse still got a little sweaty on the shoulders, sides and some under the saddle area (he is growing his winter coat and has not yet been clipped for the season).

Plus, the Gina Miles Under Pad really is THAT easy to clean. If there’s any hair or a little bit of sweat, it will rinse right off with a good hose down. And if there is anything that I can appreciate, it’s easy clean up.