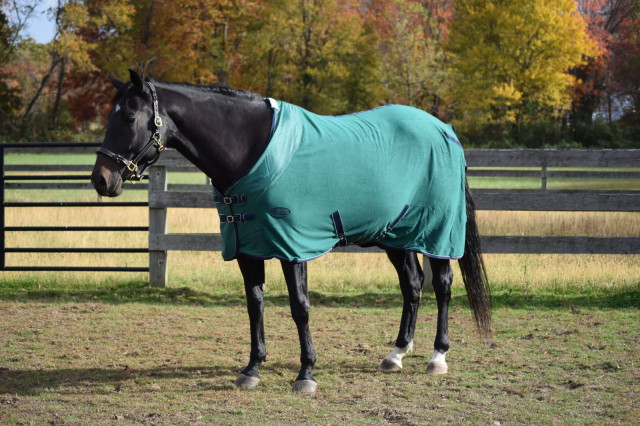 But here's my favorite feature of them all: the fleece material of the cooler is also infused with anti static properties. Photo by Lorraine Peachey.

There are a lot of things that I don’t like about the snowy winter season. Don’t get me wrong…there’s nothing better than going for a ride right after a snow storm. Everything is perfectly serene, and the dull landscape has been transformed into a winter wonderland.

When it comes to horse keeping, there are many little annoyances that arrive along with the cold temperatures. You’ve got the classics…like frozen water buckets. Battling numb fingers and toes. And changing horse blankets.

In fact, one of my least favorite things when pulling a blanket off of a horse is the inevitable static shock. Because it is absolutely going to happen at some point. So I cringe every single time that I pull blankets off, waiting for it.

When my number does come up, and that static shock does come to pass, I feel, hear, and sometimes even see the shock. I jump. And whatever poor, unsuspecting horse was wearing said blanket certainly jumps. Epic fail.

This season, I’ve been wearing a new fleece cooler on my gelding, Rufus. And it’s one that I’ve been (very) eager to try out since first hearing about it early last year. I’m talking about the Anti Static Fleece Cooler from Weatherbeeta.

I was very interested to hear of horse apparel that could combat the dreaded problem of static shocking poor, unsuspecting equines! The Anti Static Fleece Cooler is crafted out of a lightweight polyester fleece, that is both soft and comfortable to the touch. 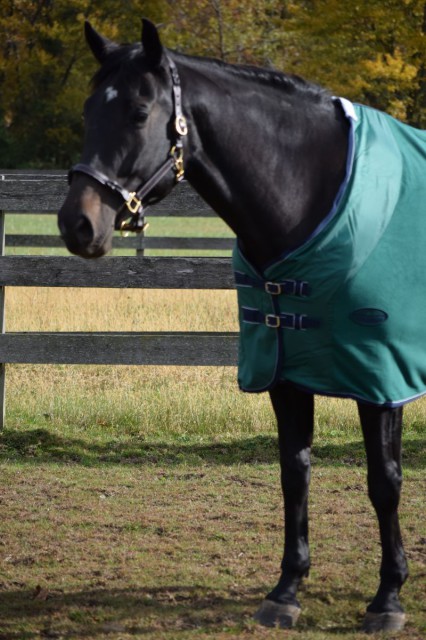 The Anti Static Fleece Cooler features a nylon lining in the shoulder are in order to reduce rubbing and stretching. Photo by Lorraine Peachey

The cooler features a nylon lining in the shoulder are in order to reduce rubbing and stretching. I also noticed the nylon type fabric on the outer side of the cooler that goes around the standard neckline, and down around the chest.

This definitely is a look that is pleasing to the eye, as it gives the Anti Static Cooler some stylish flair! The front of the cooler fastens with two buckle straps on the chest, two low cross adjustable surcingle straps under the belly and a tail cord.

The fleece fabric of the cooler also has wicking properties, so that it can pull moisture away from your horse’s coat. Which means that it will help him or her to dry comfortably after getting sweated during exercise.

But here’s my favorite feature of them all: the fleece material of the cooler is also infused with anti static properties. Which can help keep your horse protected from those not so pleasant surprise shocks from static electricity.

With the (countless) number of times that I’ve personally experienced status shocks while pulling blankets, sheets or cooler off of horses…let’s just say that I was more than ready to put the Anti Static Fleece Cooler to the fest.

When the cooler arrived, I was pleased to feel that the fleece fabric felt soft to the touch. Upon outfitting Roo for the first time, I found the fit to work very nicely. Roo is a Dutch WB / TB, who has a stocky build and a short back.

The cooler comfortably accommodated his broad shoulders, and contoured to the curve of his back. And, it draped nicely along the rest of his body. The hardware on the two front buckle straps and belly surcingle straps fastened easily, and felt to be of nice and durable quality. 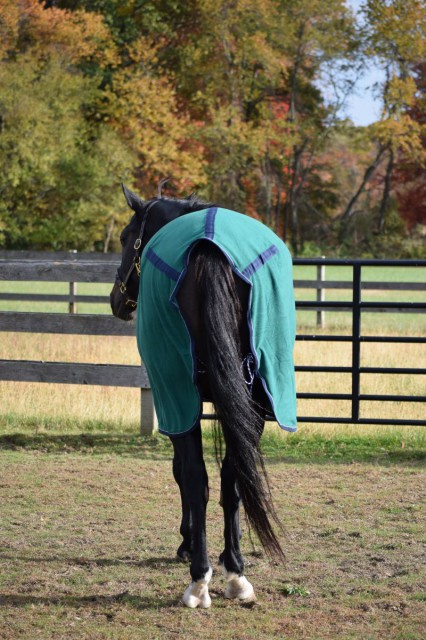 The front of the Anti Static Fleece Cooler fastens with two buckle straps on the chest, two low cross adjustable surcingle straps under the belly and a tail cord. Photo by Lorraine Peachey.

I’ve relied on the Anti Static Fleece Cooler in order to help Roo’s coat dry off nicely after his daily rides this season. Since I made the choice not to clip Roo for the cold weather, his coat became quite sweaty from being ridden.

In order to help his coat dry out comfortably, and to prevent Roo from getting a chill, I outfitted Roo in the Anti Static Fleece Cooler after his workouts. Pulling the cooler on and fastening the straps has been fast and easy.

Once Roo is outfitted in the cooler, I keep him in his stall. That way, he can munch on some hay, and dry comfortably at the same time. I generally give him a couple of hours, and then pull the cooler off of him, and then replace it with a sheet or blanket.

After a couple of hours of wear, I find Roo’s coat dries off nicely. He does sometimes have some damp splotches…but he’s got a pretty wooly coat of hair right now! I also notice that while the fleece fabric helps to wick away moisture, the cooler itself does not feel damp.

I’ve tempted fate many a time while using the Anti Static Fleece Cooler too. In that I intentionally drag it off of Roo to try to create the type of friction that would cause a static shock. Not that I’m trying to shock him or anything!

I can say that during the entire time that I’ve used the Anti Static Fleece Cooler, that I’ve not had a single occurrence of static shock. Which makes not only me happy…but also Roo. Because static shock is not, and has never been cool.

The Anti Status Fleece Cooler is available from Weatherbeeta, in either Black/Silver or Hunter/Navy (pictured). Both colors have a retail price of $74.99, and you can find more information out about the cooler here.