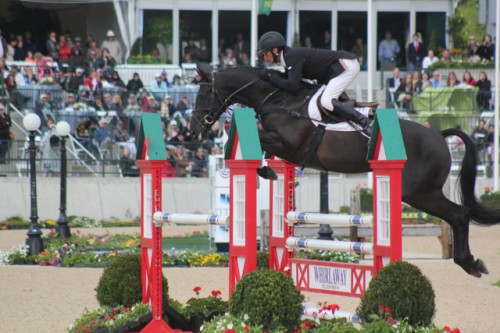 Another Rolex has come and passed. The leaderboard certainly took a beating after cross country; I don’t think anyone expected Mary King and William Fox-Pitt to retire on course; I almost choked on my coffee when I saw Fernhill Urco stop out of the water. Hats off to Andrew Nicholson, who rode beautifully all weekend to take the top prize with the stunning Quimbo. What was so exciting about this Rolex was the amount of first-timers and up-and-coming riders who had great trips; it makes everyone excited to see what they’ll do in the future.

Andrew Nicholson went one-three at Rolex on Sunday. Quimbo jumped a clear round with a few time faults to retain the lead, and Calico Joe dropped one spot with eight faults to finish third. William Fox-Pitt and Seacookie TSF finished second. This sets up a battle royale at Badminton to find out which, if ether, of them will take home the Rolex Grand Slam. [Rolex Results]

Buck Davidson and Ballynoe Castle RM were the highest placed American pair at Rolex; they finished fourth. Lynn Symansky continued her great season with Donner, finishing fifth. The amount of adoration that Buck clearly has for this horse is amazing to see, and I can’t help but see a lot of “try” in Donner. Mad props to Lynn for bringing this beautiful horse along so well. [Rolex Results]

Wait, so Badminton is next weekend? With all the excitement from Rolex, you’re forgiven if you forgot about the big event across the pond. In addition to WFP, Andrew Nicholson, Michael Jung, Zara Phillips and Mary King, we’ll also be keeping an eye on Colleen Rutledge and Shiraz, Clark Montgomery and Universe, Tiana Coudray and Ringwood Magister, and Canadian Rebecca Howard and Riddle Master. [Badminton Entries]

Stuart Tinney and his stunning ride Pluto Mio won the Sydney CCI3* in Australia over the weekend. It looks like this is going to be a great ride for Stuart; the horse is an impeccable and impressive jumper. Craig Barrett and Sandhills Brillaire finished second, and Shane Rose and Virgil took the third spot. [An Eventful Life]

Next weekend’s not packed enough for you? The 139th running of the Kentucky Derby takes place next Saturday. The top three contenders, Orb, Verrazano, and Goldencents, have all arrived at Churchill Downs and participated in workouts over the weekend. [NBC]

Beezie Madden and Simon won the Rolex FEI World Cup Show Jumping Final in Gothenburg, Sweden. Beezie and Simon went into a jump-off with Swiss rider Steve Guerdat, and after he pulled two rails, Beezie won with a fault-free round. Three other U.S. riders, including McLain Ward, Reed Kessler, and Karl Cook, finished in the top 11. [Chronicle of the Horse]