There’s your earworm for the day:

Oh, yes. In order to receive respect from your horse, as an event rider, it is at times essential to give respect — particularly when you are jumping a horse that tends to get slightly heavy in your hand. You don’t want to pull on the mouth. You don’t want to make constant correction, at least, I don’t. I’d rather just ask politely and get a nice, congenial, “sure, Mom,” response. 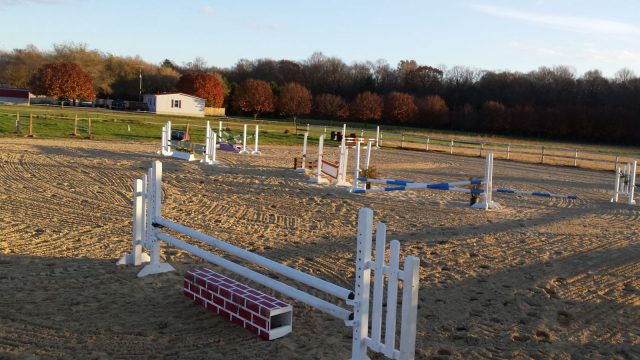 Four and a turn photo by Holly.

Most amateur riders like me I think feel the same. It should not be so much work. So, in an effort to gain back some respect, I changed the Event Horse’s bit for a little at-home jump school. Oh, my. Let’s give that idea the proper amount of respect: OH MY.

I have a rather short arena but I can set a four-stride line. This one was right on the 12-foot normal stride. I knew I’d have to gain RPMs in the turn and keep up the pace through the line, then half halt for the next turn, after the second fence in the line.

What I didn’t count on was the new and different attitude that the different bit caused in Event Horse. He galloped down the line, I gave him a little space when we landed, then sat up and politely asked, with my normal, regular, old-bit amount of pressure, for a half halt to make the turn to the right.

Whoohoo! I got it really fast, really quickly,  a really really real half halt! As in I nearly went out the front door to the left while Event Horse braked to go right. The arena fence was right there, up close and personal. We didn’t lose PVO (proper vertical order, earth-horse-rider), but it was touch and go.

So. Lesson learned. New bit equals new level of respect, and rider must subsequently adjust as well. And this is the lesson — that if you demand respect at a certain level, say, change the bit to something a bit more — be ready to change yourself to ride the horse you get. This was not a complication I had planned on.

What happened was I expected him to respect my half halt but I wasn’t thinking far enough ahead. A different bit will have a different response, and required a different use by me — I should have been milder with my half halt and not assumed the same kind of pull would work.

So in doing the exercise again, I checked myself when we landed and asked much more softly and got a more balanced and smoother turn. Light bulb moment: respect the respect you expect!!!

I’ve got a horse that can be a real bully on the ground — the more I correct him, and the consistency of correction, makes a difference and is the only thing that seems to work. If he isn’t handled for a while or if someone else handles him and treats him differently, I’m back to Square One with him in the respect department. And on occasion, even with consistent pressure, he’ll still walk over top of me or bang me with his head reaching for something. He doesn’t have a “personal space” radar.

And that’s not a thing I want to thump him for all the time, either. What I am doing is watching my own body language and taking care to be correct in my approach and handling and following the rules to avoid having to correct him — rewarding his good behavior and asking him politely not to step on me in the cross-ties, etc. Respecting the rules myself first.

Respect doesn’t mean cruelty and fear, big nasty bits and tight nosebands; it really means I am ready for a different level of performance and I’d like to see if we can’t develop an even deeper partnership together. I get it now.

I love the story Jim Wofford tells about one of his best horses. When jumping, Jim would just have to look in the direction he wanted to head, and the horse would follow his eye upon landing. I’d like to have that kind of communication with my horses some day, where bits and bridles and reins and spurs didn’t matter, and which stirrup you weighted signaled which way to go. That’s a cool concept.

So until Event Horse gains Wofford-Level clairvoyance, and I magically develop upper level riding skills overnight, I will continue to work hard on this ammy-rider-thing and when I get big ideas to change the tack, I’ll make sure I think it through first.